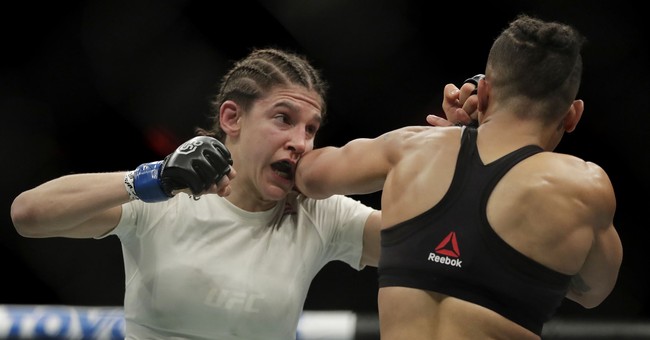 If you missed the Christmastime viral video of a female Best Buy employee in Hawaii neutralizing a shoplifter, you lost out indeed.

The goon got away, but he didn’t quit while he was ahead.

On the 23rd, Mr. Pockets showed up again, and Summer was determined to prevent a repeat.

As reported by Birmingham’s WBRC6, the guy picked up another pricey speaker and headed out the door.

But holy cow, she wasn’t having any of it.

Think transgender sports disadvantage women? Watch the video; it may change your ‘tude.

Summer brutally blocked the thief — who was himself stout — at the entrance of the Aiea store.

She eventually shoved the guy through a barrier.

The butch bouncer described the incident to Hawaii News Now:

“My first instinct was to just stop him. He’s not going anywhere. He’s not about to do this again. I’m not about to let it happen, especially not on my watch.”

The store’s manager told her to stand down, as there’s no reason to get hurt:

“I could hear my manager in the back of me saying, ‘Let him go, Summer. It’s okay, let him go. Let him go.’ They would rather let an item go than us risking our lives, and I totally understand that. I appreciate that.”

That’s a very good policy, which was affirmed by Best Buy in a statement:

Our biggest concern is always keeping our employees and customers safe. The reality is simple: Physically engaging with criminals can be dangerous. None of the products we sell is worth putting the safety of our employees at risk.

Fighting the guy was a fireable offense, but the Asset Protection worker didn’t care — she’d already announced she was quitting in order to focus on her other job.

The fight ended with the man outside and speakerless.

Once ejected, he apologized to her and tried to get a fist bump.

[S]he told him to leave and never come back.

I hope I never have someone walk up to me the way she approached at the end of the clip. Nevertheless, Summer wants to bless him:

“I found out who the guy is, and I mean to reach out to him and bless him. I want to bless him so that he could stop doing what he’s doing.”

But she’s the one who’s getting blessed: The security footage hit the web and blasted off, having been viewed now millions of times.

The girl’s got experience in several sports, football and rugby among them.

And due to her spotlighted athletic performance at BB, Las Vegas’s Women’s Football League Association has asked her to hop on board.

“Their captain had hit me up on Facebook messenger, told me that she seen the video, and she’s wondering if I’m interested in playing for this football league. I was like – this is crazy!”

And if they have any sense, they’ll have that chick on the line with “Y-O-U-R-E D-E-A-D” Sharpie’d on her knuckles.

Oh, and Word to the sneaking Wise: If you’re looking for a superior speaker, check out the more easily portable WONDERBOOM.

Actually, I think that should be Summer’s football name.

If so, heaven help her opponent.

The 26-year-old seems like a nice girl; but if you try to pull some foolishness, it’s a cruel, cruel Summer.