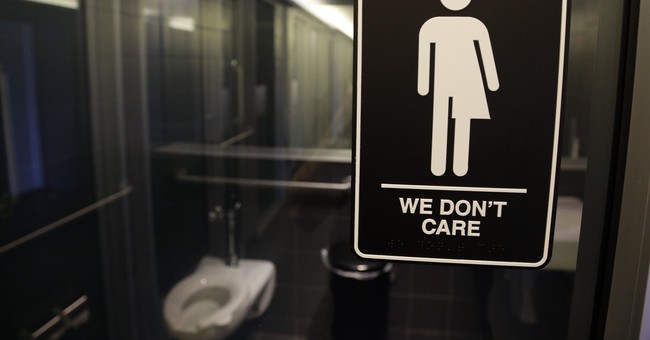 In case you haven’t heard, some schools are allowing boys and girls to use the same bathroom together.

As I’ve said before, I don’t understand what’s happening (or has happened) to America’s schools. When I was a student, I don’t believe a male and female would’ve been allowed to be in any room alone, much less one in which everybody’s pulling down their underwear.

But such is the current state of things, and in Wisconsin, it appears there’s been a terrible transgression.

As reported by local television station WSAW, Austin Sauer was arrested last Thursday at Rhinelander High School in the city of the same name.

Allegedly, he showed his privates to a kid.

According to the Oneida County Sheriff’s Office, the 18-year-old’s been charged with fourth degree sexual assault, child enticement, and exposing his genitals to a child inside the school.

The sex of the child hasn’t been confirmed, but — as per the Christian Post — the victim is believed to be a girl.

For the time being, the gender-neutral bathroom’s been closed.

Also, no notification was made to parents — as indicated by Captain Terri Hook of the Sheriff’s office — because it was an isolated incident and the perpetrator’s been removed.

It seems to me parents should’ve been made aware, since the crime occurred due to the school’s employment of a bad idea. Thank God he was caught, and now Mr. Pulled-Out Peter will have to deal with Captain Hook. It’s certainly no surprise how the restroom experiment Panned out.

The Daily Caller spoke to a representative for the school, who explained that the ordeal wasn’t “random”:

“The arrest in question is still under investigation with the Oneida County Sheriff’s Department so I am limited in what I can say. This was not a random incident. Both students went into the bathroom voluntarily. … The male student will no longer be able to be on the school grounds.”

In my view, the rep could’ve also well said this:

“We must’ve been out of our minds to have offered a co-ed restroom. We’re watching several sex-crime documentaries — and Porky’s — this afternoon to remind us what the world is like.”

As noted by TDC, multi-sex pee rooms are all the fuss:

Unisex bathrooms and other policies allowing transgender people to choose the bathroom that matches their gender identity have been a contentious subject, most notably in 2018 when a man exposed himself to a young girl in a Target women’s bathroom. Target changed its bathroom policy two years prior to the incident to allow transgender customers to choose which bathroom they would like to use, Business Insider reported.

And it’s abuzz in the nation’s centers for learning:

In an effort to accommodate to transgender students, school districts across the country have sought to implement unisex bathroom policies, or policies that allow non-binary students to choose which bathroom to use. Maryland is among the states that have pursued such policies, allowing transgendered students beginning in 2017 to use whichever locker rooms or bathrooms they prefer after students initiated the push.

It seems to me that, if a student doesn’t feel comfortable using the restroom designated for someone of their sex — or for any other reason (I can think of a few) — it would be nice for there to be a facility with a single-user setup.

But letting young people go into rooms together to drop their drawers with the opposite sex is a metaphorical drop to the knees — in order to beg for there to be huge problems.

And aside from potential frisky business, as this story illustrates, some very dangerous violation can occur. A mother and father should be able to put their young daughter in the hands of the public school system without worry that anything like this — or far worse — will happen to her.

For all the talk of protecting children in schools, how is this not doing the opposite?