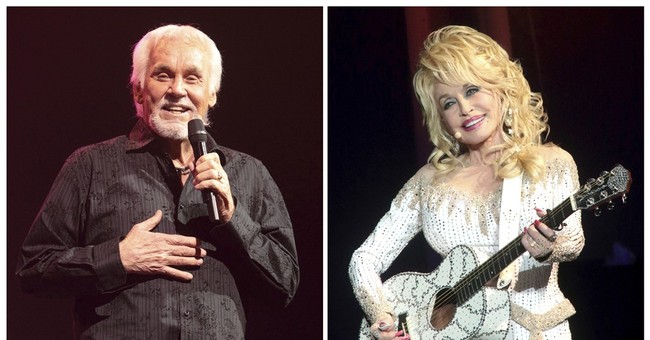 In this combination photo, Kenny Rogers, left, performs on March 7, 2013, in Lancaster, Pa. and Dolly Parton performs in Philadelphia on June 15, 2016. The pair, who spawned hit duets like “Islands in the Stream” and “Real Love,” announced they will be making their final performance together this year. Rogers, who is retiring from touring, announced on Tuesday that his final performance with Parton will be part of an all-star farewell show to be held at Nashville’s Bridgestone Arena on Oct. 25. (Photos by Owen Sweeney/Invision/AP, File)

As you probably know, on Friday, America lost one of its most endearing voices.

Kenny Rogers — whose career in entertainment spanned six decades — passed away at home in Sandy Springs, Georgia at the age of 81.

His family posted the news on social media:

The Rogers family is sad to announce that Kenny Rogers passed away last night at 10:25PM at the age of 81. Rogers passed away peacefully at home from natural causes under the care of hospice and surrounded by his family. https://t.co/adxAgiMW2s pic.twitter.com/nggWiiotMT

Kenneth Kay Rogers — who would go on to sell more than 47 million records — came from humble beginnings.

Born in 1938, the Texas native was raised with seven brothers and sisters in the public housing section of Houston Heights.

And he sure didn’t start off in country.

At 20 years old, he scored his first gold single, “That Crazy Feeling,” as Kenneth Rogers.

Without a follow-up success, he joined the jazzy Bobby Doyle Trio as an upright bass player.

In 1966, Kenny became a member of the New Christy Minstrels, who reformed as The First Edition and hit the charts with the psychedelic “Just Dropped In (To See What Condition My Condition Was In).”

Check him out with his bass guitar, brown hair, sunglasses, and an earring:

Mixing some country into their pop, the renamed Kenny Rogers and The First Edition went on to garner hits such as the global “Ruby, Don’t Take Your Love to Town.”

What followed was a string of hits — most notably “The Gambler,” which spawned a made-for-television movie of the same name.

And that wasn’t his only tune turned into TV: Juggernaut “Coward of the County” — which appeared to be about a gang rape — also made a splash on the small screen.

In all, the husky-voiced singer racked up 24 number ones, three Grammys, and six Country Music Association awards.

Along the way, he became a cultural icon — complete with chicken restaurants in his name, prominence in a Seinfeld episode, and a fantastic random Will Ferrell joke or two.

In 2013 — the same year he was awarded the CMA Willie Nelson Lifetime Achievement Award — Rogers was inducted into the Country Music Hall of Fame.

In a surprising turn, 1999 saw a return to radio for the bearded legend. “The Greatest” — composed by “Gambler” hitmaker Don Schlitz — reached #26 on the Billboard Hot Country Singles & Tracks.

Don said of the crooner, “I think the best that any songwriter could hope for is to have Kenny Rogers sing one of your songs. He gave so many career songs to so many of us.”

Two celebrities with whom Kenny was most associated were fellow legends Lionel Richie and Dolly Parton.

Upon learning of his pal’s passing, Lionel — who wrote the #1 hit “Lady” — posted the following to Instagram:

“Today I lost one of my closest friends 💔 So much laughter so many adventures to remember, my heart is broken. My prayers go out to Kenny’s Family.”

Today I lost one of my closest friends 💔 So much laughter so many adventures to remember, my heart is broken. My prayers go out to Kenny’s Family.🙏

On Twitter, Dolly — who duetted with the star on his other #1, 1983’s Bee Gees-penned “Islands in the Stream” — spoke through tears in a moving tribute to her friend:

“[I] couldn’t believe it this morning when I got up and turned on the TV — checking to see what the coronavirus was doing — and they told me that my friend and singing partner, Kenny Rogers had passed away. … [I] loved Kenny with all my heart, and my heart’s broken. And a big o’l chunk of it has gone with him today. And I think that I can speak for all his family, his friends and fans, when I say that ‘I Will Always Love You.’ … God bless you, Kenny. Fly high, straight to the arms of God.”

You never know how much you love somebody until they’re gone. I’ve had so many wonderful years and wonderful times with my friend Kenny, but above all the music and the success I loved him as a wonderful man and a true friend. pic.twitter.com/hIQLIvt8pr

Kenny will be missed. By Lionel. By Dolly. By the world.

And that most certainly includes me.

Thank you so much, Kenny. For all the heart, love, and music you’ve given us all.

Doris Day Leaves Us at Age 97, But She Leaves Us with Something Wonderful NYT journalists are scared to have an op-ed page