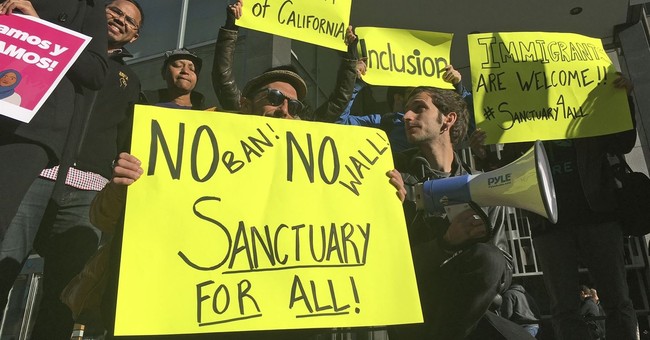 FILE – In this April 14, 2017, file photo, protesters hold up signs outside a courthouse where a federal judge will hear arguments in the first lawsuit challenging President Donald Trump’s executive order to withhold funding from communities that limit cooperation with immigration authorities in San Francisco. Trump has unveiled a long list of immigration priorities he says must be included as part of any legislative package extending protections for young immigrants known as “Dreamers.” That includes increasing penalties against so-called “sanctuary cities” that refuse to cooperate and share information with federal immigration authorizes, including blocking them from receiving certain federal grants. (AP Photo/Haven Daley, File)

Are you mad about the stimulus package? Some people believe it was way too porkish.

But only some — one group thinks the bill came in light.

As reported by CNN, activists are upset that the record-setting $2 trillion relief bill passed without payments to illegal immigrants.

They’re arguing the exclusion means those in the country illegally will be forced into jobs that will put them at risk of contracting COVID-19.

Here’s how CNN puts it:

Unauthorized workers make up about 5% of the US labor force – around 7.6 million people, according to the latest estimates from the Pew Research Center.

Advocates argue the coronavirus crisis that’s devastated global markets, overwhelmed hospitals and left millions without jobs is having an outsized impact on undocumented workers. Many had service-sector jobs that were decimated by the pandemic. Those who remain employed largely don’t have the option of working from home, and are risking their safety to keep supply chains going.

S.G. Sarmiento — campaign director for the National Day Laborer Organizing Network — points out, “It’s undocumented workers that are still in the fields, still in the factories, still the janitors in the buildings, still looking for work as day laborers.”

And although illegal immigrants are generally disallowed from partaking of federal benefits, people such as S.G. believes this whole coronavirus clampdown should permit an exception to the rule.

At first glance, you wouldn’t necessarily expect this group to be included in the stimulus deal. After all, they generally aren’t eligible for government benefits. And these days it’s rare to see leaders in Washington rolling out the welcome mat for immigrants.

But because of the threat the novel coronavirus poses, advocates argue this shouldn’t be treated as business as usual. In a public health crisis, they say, if someone feels like they can’t miss work or can’t afford medical care, that impacts the entire community.

To S.G., it’s downright immoral. And not just that — it’s averse to logic, too:

“From a public health perspective, you cannot have an effective national response to a pandemic that excludes enormous segments of the population. That’s both illogical and immoral.”

Despite the gripes, the stimulus bill did in fact include provisions for those who’ve bypassed America’s immigration system.

While they may not get checks, participants in the Deferred Action for Childhood Arrivals (“Dreamers”) and Temporary Protected Status (TPS) programs were granted more access to testing as well as emergency medical care.

But not enough, according to Immigration Hub Executive Director Tyler Moran:

“The package does not provide enough access to testing and treatment. … We just think this is totally irresponsible and dangerous and infuriating.”

He also believes your neighbor’s here on the down-low:

“Everyone’s health literally depends on the health of your neighbor. And guess what? Everyone has an (illegal) immigrant neighbor.”

As noted by The Daily Wire, The Boston Globe stated Friday that illegals forced out of work due to Wuhan woes have no financial safety net in order to make it through.

The Globe said there are hundreds of thousands of ’em in Massachusetts alone:

They are the hourly employees who work as cooks and dishwashers, cleaners and clerks. They are among the more than 250,000 unauthorized immigrants in Massachusetts who account for about 5 percent of the labor force. These immigrants typically pay taxes but don’t qualify for stimulus checks or unemployment benefits, which are reserved for US citizens and those legally authorized to work in the U.S.

Congresswoman Rashida Tlaib’s certainly on board with federal aid being doled to the less-than-legal crew — a week ago, she championed each person in America getting a big fat $2,000.

That’s each person — in the words of TDW, “every person in the country, including children, illegal immigrants, and
‘temporary visitors whose stay exceeds three months.'”

How about every person gets a new bicycle, too? I’ve been wanting one, and I know a few kids whose I could take and sell. For $2,000 each.

Of course, not everyone’s cool with coronavirus cash cushioning those here without permission, and one such person’s immigration reform group Numbers USA Deputy Director Chris Chmielenski.

He told CNN all about it:

“With one of the worst jobless reports in quite a few years, the primary focus right now should be on American workers and lawful immigrants. We should make sure that those people are taken care of first.”

“Our top priority has to be helping Americans and helping legal permanent residents who are most affected by the crisis,” he asserted, “both from a health perspective and economic perspective.”

Then again, why not give every single individual a few bucks? We all just reached into our pockets and threw the Kennedy Center $25 mil:

Are viruses repelled by staggeringly-funded centers for the performing arts?

Abortion Gets 86’d in Texas as a ‘Non-Essential’ Service, Planned Parenthood Sues for ‘Health and Life’ Gonna leave a MARK! Katie Pavlich SCHOOLS Joe Biden on the history of his OWN (aka Obama's) DOJ, Ferguson, and Michael Brown