You Think Government Overreach Was Bad During the Outbreak? Wait Till You See the ‘Recovery’ Policies

To leverage a popular meme: One does not simply ‘restart an economy’.

The knock-on effects of compulsory lockdowns and business closures will wreak havoc on America’s financial health for a while. The disruption of coordinated effort and trust that underlies a complex economy will take a long time to restore–and that’s without any more fear-mongering.

But Democrat politicians, their handpicked science-twisters, and a catchfart media are already stoking public terror of a second/third/tenth ‘wave’ of the Wuhan virus sweeping the nation and killing off another tiny fraction of the populace. The miasma of uncertainty will further retard businesses as they attempt to recreate their momentum. Business owners will be wondering: “Are we going to spool up, only to get shut down again or messed with? Better not hire too many people or start any big projects …..”

FEAR WAS ALWAYS THE END GAME

The lockdowns, the daily press conferences crowded with somber experts, the breathless news coverage of individual deaths, the CDC commercials about the heroism of huddling indoors–all the storm and fury during the outbreak was designed to stoke public fear. Mask requirements were never realistic public health solution but a way for politicians and ‘right-thinking’ public to signal to one another in a physical way “we are taking this seriously”–i.e., that they were *afraid*, and you should be, too, if you are on the good-guy team.

The fear-mongering isn’t going to stop; it will only evolve. Democrat politicians will drag out reopening their states and municipalities as long as possible, fretting into the microphone at every step. They will keep residents wound up and scared about safety. After they can no longer deny reality–that hysteria over the virus is baseless, that infections and deaths just keep going down with no ‘second wave’ forthcoming–Dem politicians and media will pivot to economic hand-wringing: “If we don’t do all sorts of government stuff, we will go into a DEPRESSION and everyone is going to lose everything!”

Why? Because when the public is afraid, the government can get away with anything. Fear is the politician’s most reliable tool. Scared people don’t think; they freeze or leap without consideration. As economist Robert Higgs writes:

To tell people not to be afraid is to give them advice that they cannot take. Our evolved physiological makeup disposes us to fear all sorts of actual and potential threats, even those that exist only in our imagination. The people who have the effrontery to rule us, who call themselves our government, understand this basic fact of human nature. They exploit it, and they cultivate it.

You can bet Andrew Cuomo & Friends know this truth of human nature well. As Obama henchman Rahm Emanuel famously articulated it: “Never let a good crisis go to waste.” Dem politicians have a list in their pockets of government growth they want to accomplish before the hysteria subsides–growth they could never get away with in saner times. Higgs observes:

A crisis alters the fundamental conditions of political life. Like a river suddenly swollen by the collapse of an upstream dam, the ideological current becomes bloated by the public’s fear and apprehension of impending dangers and its heightened uncertainty about future developments. Bewildered people turn to the government to resolve the situation, demanding that government officials ‘do something’ to repair the damage already done and prevent further harm.

Once politicians enact their crisis list, the ‘temporary measures’ will be here to stay. History demonstrates this unequivocally. All sorts of government programs begun to ‘address the crisis’ will continue of their own momentum–much like the ‘temporary’ welfare programs of the Great Depression; the ‘temporary’ explosion of the military-industrial complex during and after WWII; the ‘temporary’ federal micro-management of school systems during the Civil Rights Era; and the ‘temporary’ domestic spying on citizens during the War on Terror.

A textbook case in point is ‘Project Roomkey‘ in California. The outbreak was hardly upon us when Governor Gavin Newsom ordered the state to sign contracts with desperate hotel owners to bunk homeless in their establishments. Newsom’s stated objective was to prevent the spread of the Wuhan virus in the homeless population. A cynical mind, however, might suspect Newsom and big-city mayors like LA’s Eric Garcetti spotted an opportunity in the crisis to reduce California’s embarrassing homeless population at the expense of business owners and local communities.

By the time the outbreak hysteria finally subsides and the public recognizes Project Roomkey to be unnecessary and absurd, formerly homeless ‘guests’ will have been in the hotels for weeks or even months. At that time, look for a swarm of ACLU activist-lawyers to descend on the hotels, declaring the homeless ‘residents’ with tenants rights under California’s ferocious tenant-protection laws. The hotels and their surrounding communities will be stuck indefinitely with thousands of destructive, drug-abusing, mentally ill squatters, while owners fight in court to regain control of their properties.

Many hotels won’t be able to afford the litigation, opting to pivot their establishments to permanent hotel-shelters with a meager but steady income from the California taxpayer. Hotels that do fight the lawsuits will likely go broke; find themselves commandeered; and turned into permanent shelter facilities.

Either way, Governor Newsom gets thousands of homeless off the streets for a very long time and winds up appearing a bit less incompetent.

PERMANENT FEAR (OR ‘BACK IN THE USSR’)

For three years, Democrats and their media clients terrified the country with unfounded accusations that President Trump was a lunatic Russian stooge eager to expel every Hispanic in the country, spark a nuclear war with North Korea, and hand over the White House keys to Vlad Putin on a velvet cushion.

The Wuhan virus came along just in time to fill the void left by the subsidence of the debunked Russia Scare and its various sideshows. the virus and its knock-on effects will be just another chapter in Democrats’ long-term strategy: create a nation in perpetual fear, a populace that lets progressives engineer the society they want.

This idea is far from new. Back in the USSR, the soviet government kept the populace marinated in paranoia. America, Europe, and the decadent West were out to get them. Spies and betrayal of the party were everywhere, as demonstrated by regularly scheduled show trials (a la Michael Flynn). Soviet leaders cautioned citizens to never stop worrying, lest the imminent invasion of the capitalists catch them unware. Fear became a way of life, a toxic relationship between the Russian people and their bureaucratic overlords, like an abused woman and her abuser. Russians feared westerners; they feared the secret police and government; and they feared not appearing fearful enough and getting reported by their own informer-neighbors (known as ‘Karen-chatkas’).

The 2020 election will be in many ways a referendum on fear, a watershed. Whoever props up Joe Biden and moves his mouth for him will assuredly propose a ‘Newer New Deal’ that empowers the federal government to take total control of citizens’ lives in return for ‘safety’–health safety, economic safety, safety from whacko gun owners, safety from Deplorables’ insane skepticism of technocratic experts, safety from climate change.

Americans will then decide: do we turn over the government entirely to ‘experts’ in an effort to save us from a never-ending succession of factitious bogeymen, thence winding up in a species of high-tech neo-feudalism?  or reject fear as a way of life and preserve a handful of the freedoms remaining to us, after two centuries of ‘crises’ have eroded civil liberties and government restraint almost beyond recognition in the United States?

For Trump, it’s never been about the economy 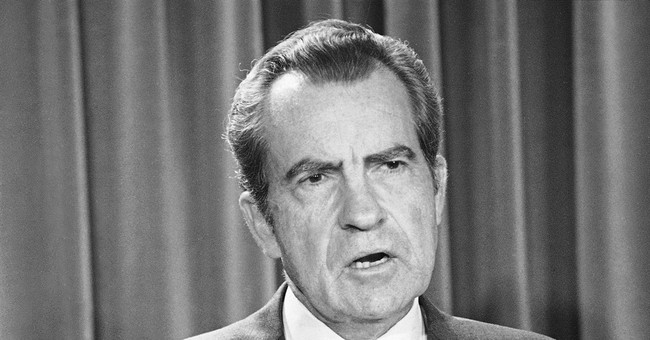