Al Franken, former comedian turned failed liberal talk show commentator turned moonbat Senator from Minnesota, recently gave a speech to the American Constitution Society in Washington.  Like myths and lies spread in his many books about, ironically, myths and lies, he continues to view the Supreme Court’s role through the prism of liberalism.  And that is the problem with Al Franken.  Known for his satire and parody, no one really knows whether when he opens his mouth whether this is the real thing or yet another satirical piece or parody.  Hopefully, once a comedian, always a comedian because constitutional scholar he is not.

Lashing out at the Roberts Court, Franken enters into a diatribe of recent cases that he proves illustrates that the Court favors the interests of powerful corporations over that of the “average Joe” out on the street.  Unfortunately, he undermines his entire argument near the end of his speech with the solution to these allegedly misguided recent Supreme Court decisions which, ironically, is what a non-activist (or conservative) Supreme Court is all about.  Hence, Franken should be thankful of the Roberts Court for (1) taking the cases he cites in the first place, (2) deciding those cases as they did in order to (3) illustrate the inherent flaws in the original legislation.

Somehow, Franken believes that this Court is hell-bent on turning the clock back on every single thing to the says of Lochner where robber baron railroads and oil trusts run roughshod over workers.  To Franken, John Roberts- aided and abetted by the evil Antonin Scalia, Clarence Thomas, and Samuel Alito- along with Anthony Kennedy (when needed) sit in collusion with corporate interests in all cases coming before them.  He catalogs a series of cases he claims are denying the poor little people their rights and equal justice under the law “one 5-4 decision at a time.”  At times, he waxes comedically poetic equating the closed front brass doors to the Supreme Court (closed for security and repair purposes) with the heavy handed fist of the Roberts Court using brass knuckles.  Honestly, I cannot make this stuff up myself.

Of course, the case that really gets the goat of Franken and other constitutionally-illiterate liberals, is the Citizen’s United case.  Here, he declares that the Roberts court took the unprecedented step to re-argue the case and include questions beyond those originally presented on appeal.  What he leaves out are three important facts.  The Court could have decided the original appeal and would have most likely come an identical conclusion.  However, the case was re-argued in an effort to eliminate piecemeal challenges and decisions to various aspects of the law in question.  In other words, does the Court accept and rule on every challenge to every aspect to McCain-Feingold, or do they take a broader approach?  Secondly, the case was re-argued because of some very chilling arguments by the government in the first oral argument.  Namely, it was the position of the government, given their reading and interpretation of the law, that the government possessed the potential ability to ban mailings and publications as campaign literature, not just electronic messages.  In other words, no more Thomas Paines.  Of course, that was a hypothetical presented in the original argument, but one that perked the ears of the Court.  And third, in response to the concept of stare decisis, which Franken seems to place great emphasis on, Clarence Thomas said it best when he stated that it is the Constitution that is the most important factor.  Ironically, according the sacrosanct status placed on stare decisis by such noted constitutional scholars as Al Franken, Lochner would be the law of the land as well as Plessy vs. Ferguson for that matter.  And if it wasn’t for those pesky 13th and 14th Amendments, stare decisis would leave Dred Scott the law of the land.

One could go through all the cases listed by Franken and analyze the decisions.  But that would take some time- beyond the scope of this posting.  Franken leaves out the fact that many of these cases involve intricacies of ERISA, ADEA, EEOC and other laws and rulings.  Many are not the clear cut choices between “competing interests” Franken discusses.  Many are not a case of the big powerful corporate interests against the poor little factory worker expecting a fair shake.  At least three of the cases originated over whether the lower courts exceeded their authority, mandate, or interpretation.  The fact that these cases even wind their way to the Supreme Court illustrate the inherent problem.

And that problem is that in many cases, what Congress intended may not have made it into the word of the law.  For instance, Franken cites the Ledbetter case which was decided on the wording of the law itself- a 180 day limit for filing claims.  That, to me anyway, is 180 days- not four years later when Ms. Ledbetter sued Goodyear.

This is where Franken then negates his whole diatribe, er…comedy act.  He says that he is proud to note that Obama’s first act as President was to sign into law the Ledbetter Fair Pay Act.  He proudly states that he is a co-sponsor of the DISCLOSE Act currently before Congress in response to Citizen’s United.  Of course, Al Franken is seeing first hand how difficult that is given the political process.  He proudly mentions his amendment to a defense appropriations bill in response to the Jamie Leigh Jones case involving KBR, a subsidiary of Halliburton.  That case has been appealed all the way to the Supreme Court.  It will be interesting to see how, or even if, they decide it in the upcoming 2010-2011 term.

What Franken is so proud of is the political process in action.  If the legislative action runs counter to the Constitution or is so vague that it creates disagreements among the inferior courts, the Supreme Court hears the case.  Take, for example, the Ledbetter case concerning a 180-day period to file claims.  That is what it says literally.  Not 191 days “because I forgot to file the claim” or, in Ledbetter’s case, four years (that’s 1461 days to Al Franken) later.  That’s it in stark black and white.  If there is this confusion, then the Court is obligated to interpret the actual text of the legislation- not the intent and not the rare cases that may come along.  And although this may appear like the brass-knuckled heavy-handed fist of a conservative activist Court to “scholars” like Al Franken, then he seriously misses the point.  If the legal text is confusing or has gray areas- and I argue such existed in the Ledbetter as well as all the other cases he listed- then fix the law.  Which is exactly what happened with the Ledbetter Fair Pay Act, Franken’s own amendment to the Defense Appropriations Bill, and is happening with the DISCLOSE Act.

It is quite obvious that Franken and other liberals have a personal animus towards John Roberts and company.  To them, activists like Stevens and Thurgood Marshall and Earl Warren are the iconic prototype for Supreme Court justice.  Their character assassination of these individuals disguised as constitutional discourse is becoming quite unbecoming of members of Congress.  At least Obama had the unfortunate audacity to get it wrong in front of most of their faces.  But if an alleged constitutional scholar and professor like Obama can get it so egresiously wrong, what are we to think of Al Franken- comedian, author, and commentator on a failed liberal radio talk show?

Finally, Franken takes great comedic pleasure in calling into question the Roberts philosophy of judging, namely that judges are like umpires and call balls and strikes.  They do not write the rules.  Of course, Franken like liberals everywhere in every instance, see these as code words for conservative judicial activism.  But, Roberts has it exactly right.  If the law runs counter to the Constitution or is ambiguous in the first place and open to apellate scrutiny and confusion, then the law must be fixed.  And laws are not “fixed” by judicial fiat.  That is the role of the legislative branch, a fact apparently lost on Al Franken.  But then, once a comedian, always a comedian.  Which is pretty darn embarrassing to the legislative branch.  But then again, these cases are inevitable since Congress is passing laws in haste, “striking while the iron is hot,” not reading what they write, let alone vote upon.  Thankfully, the Constitution, something Al Franken should consult on occasion, provides the remedy every six years in the case of “Senators” like Al Franken.  To Al Franken, that’s Article I, Section 3, Clause 1. 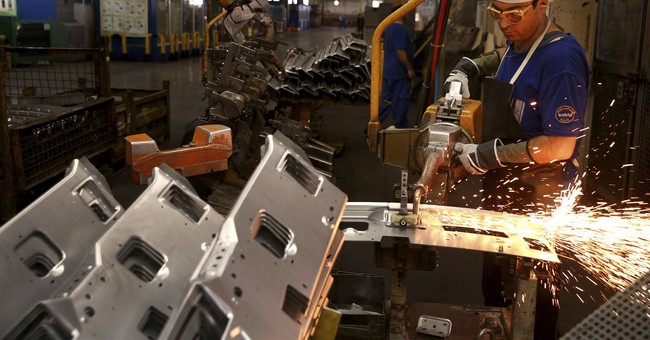 Output Contracts For The First Time In 6 Years