Will They Really #WalkAway from the Democrat Party?

Is this the beginning of an exodus away from the Democrat Party?

It might be too good to be true, but maybe in an age where Donald J. Trump can win the 2016 election as a Republican, the party that had to cheat in their own primary to nominate Crooked Hillary might be in bigger trouble than I’d dared to imagine.

If you’re on the right (or a sane independent), you’ve probably wondered how millions of Americans can continue to be Democrats.

The crazy has been building for a long time.

Back in the 90s, you could be forgiven if you thought the Democrat party was the hip, socially inclusive version of the Republican party. After all, President Bill Clinton appeared to be a pro-business ‘New Democrat’ who presided over a booming economy and worked with Newt’s Congress to achieve Welfare Reform. He was no Jimmy Carter.

But ever since about 2000 when the Supreme Court decision tipped the disputed presidential election to George W. Bush, things have been going downhill. By 2004, the ancestors of today’s p$$yhat wearing #Resistance were calling W ‘BushHitler’ and the wide shadow of Michael Moore cast over America. Don’t forget Code Pink, Peta, Earth First, and those G20 terrorists who lit Hummers on fire. In some ways, Antifa is just today’s iteration of the lunatic fringe of the left that’s been festering since the Weather Underground days.

You may have noticed that the center of the Democrat party now includes ideas formerly found on the fringe. Don’t look now, but a proud Democrat Socialist of America just defeated the 4th ranking House Democrat in a New York primary race.  And let’s not forget that proud Democratic Socialist ‘Independent’ Bernie Sanders stirred up millions of Americans in the last election, riding a wave of ridiculous redistributionist rhetoric from tiny-pastoral Vermont (home of Howard ‘yeaaaaaah’ Dean) to within spitting distance of the Democrat nomination (sort of).

How did the party of anti-Communist JFK end up with Commie wannabe Sanders so close to dethroning Hillary ‘Catch Me if You Can’ Clinton?

Let me count the ways…

We don’t need to wade through a litany of reasons why Obama’s radical past was an all-too-well kept secret from most Americans. Or when Harry Reid went full McCarthy on presidential candidate Mitt Romney in 2012 and laughs about it. That’s old news. These days, Nancy Pelosi openly professes her love for illegal aliens and declared MS13 contained the spark of divinity. She even excused the shooting of Steve Scalise as part of a backlash to Republican rhetoric. So, it should surprise no one when Maxine Waters calls for merciless harassment and ‘push back’ against all members of the Trump administration. We’re just slip sliding down a slippery slope.

The Overton Window has shifted to the point where we expect the Gaystapo to target Christian bakers or accuse men of being transphobic if they won’t consider dating a trans ‘woman’ (a chick with a dick).  Now the ‘tolerant’ left eviscerates Kanye West, Sarah H. Sanders, or anyone else who dares to not be a Democrat and evidence is mounting that something is deeply wrong with the so-called ‘liberal’ party.

We could recount tales of the anti-American foreign policy of Obama that ignored ISIS abroad, jihadists at home, and shafted Iran’s Green Revolution in favor of giving a green light to getting nukes for the Mullahs (along with pallets stacked with cash).  Obamabot Ben Rhodes may have thought that was super totes awesome, but millions of Americans said WTF!?

Perhaps more alarming in proximity, the left unleashed and coddled Antifa in the age of Trump, allegedly to punch Nazis and club fascists, but they failed to clarify that pretty much anyone who disagrees with them will be targeted.

The radicalization of the left (or the unmasking, if you know the history of Marxism) isn’t limited to black masked thugs.  We could talk about the toxic BLM and tragic assassinations of police, or the string of riots in Ferguson, Baltimore, and Berkeley (among others).  We haven’t seen much of that since actual neo-Nazis and Antifa clashed with fatal consequences in Charlottesville, but the idea that blood could run in the streets is hardly hypothetical at this point.

What you’ll also find is #walkaway.

It’s a hashtag movement that was apparently started by a former lefty and has gathered steam over the past 4 days. It’s a repository of independents and Democrats who are disavowing the left’s bigotry, hypocrisy, and intolerance.

When I suggested that we might see a Red Wave in November, it was based on signs that we’re not witnessing a normal mid-term this year. It seemed kind of absurd at the time, but after reading through the #WalkAway tweets, I have to say, this could become a tipping point.

It’s one thing for some MAGA hat wearing Trump supporter to tell a Democrat their party is on the ‘wrong side of history’. When the Democrat infested media tells them that Republicans are basically Nazis and terrorists, you can’t really blame the average Democrat for not wanting to listen.

But when a horde of Democrats write anecdotes of when and why they #walkaway, that’s a different story. This hashtag, and I can’t believe I’m saying this, is going viral. I’ve always made fun of the hashtag social media circle jerk thing, but that’s because I associated it with idiotic leftist causes and virtue signaling.

If you believe that the Democrat party has lost its way, its mind, and is on a dangerous and destructive path, you’re not alone.

And yet, #Walkaway is not trending, even though it’s spreading like wild-fire. Some believe that is the result of Twitter’s penchant for suppressing or censoring conservatives.

Well, that’s what the Emperor’s Clothes tale was about. Everyone believed the Emperor’s Clothes were magnificent until some kid blurted out that he was in fact naked.  Could #Walkaway be the ‘kid’ in our modern real-world example? I’d say yes because the Democrats have exposed themselves (forgive the visual).

Whether you call it a preference cascade, a tipping point, or a mass movement, when a whole lot of people believe they are isolated and marginalized only to discover that millions agree with them, they can very quickly form a tsunami that washes away previous norms.

The left has been milking an unearned moral superiority for decades while becoming less and less moral or patriotic. What appears to be happening is that the extreme antics and vile attitudes on the left has pushed enough people to stop self-identifying as Democrats.

As someone who does not use Twitter and is barely social media literate, I can’t say if #walkaway has, um, legs as a movement.

But if I were a Republican and the equivalent were happening in the last few months before a critical election, I would be concerned in a non-trivial kind of way.

What if instead of an ascendant Democrat party we see an utter collapse under the weight of all the insanity and hatred and stupidity that we have discussed here at RedState for years? What if the chickens are coming home to roost?

I can tell you, #MAGA and #Walkaway appear to be trending in the same direction, comingling, and getting actual ‘woke’ to the dirty rotten Democrat party. 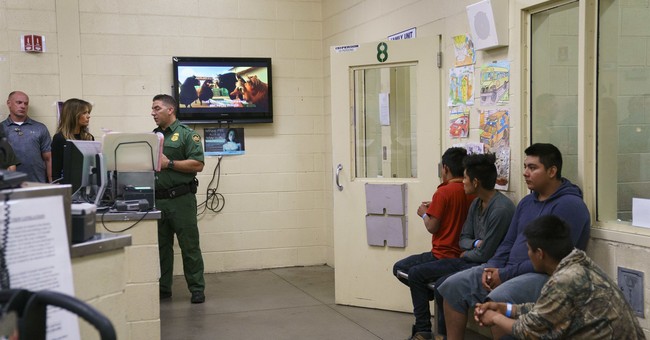 What I Saw At Family Immigration Processing Centers In Texas