The Coronavirus has already killed more people in China than the previous SARS (Severe Acute Respiratory Syndrome) outbreak in 2002 and 2003. In the United States meanwhile there are already 11 confirmed cases and given the 14-day incubation period of the virus, when infected persons don’t show symptoms, that number will only grow.

Historically, communicable diseases have wiped out millions of people. In the early twentieth century, there were two influenza pandemics that infected 500 million people and killed more than 60 million. It was one of the deadliest epidemics in human history and in the United States alone, an estimated 650,000 people died.

Today’s medical science is a major reason the influenza pandemics of the past have not been repeated. As we consider what the Coronavirus could do, we should be grateful that we have an exacting medical science community that is constantly working on cures and treatments to make sure that these horrible diseases do not kill millions of people.

But sadly, there are people and organizations that oppose the very medical research that promises to keep us safe. For years, the People for the Ethical Treatment of Animals (PETA) has been engaging in massive pressure campaigns which make ethical medical research required by federal law much more difficult to do. Through these efforts, PETA is in effect standing in the way of research that will stop the Coronavirus (and other diseases like cancer, diabetes, and heart disease) from killing those we love.

PETA has been utilizing pressure tactics that threaten to use social media and ad campaigns to call airlines out in an effort to get them to refuse to transport animals used in medical research. The research that these animals are a part of is required by federal law, is required frankly in any rational and moral system and is tightly regulated and normally overseen by independent ethicists.

PETA’s real agenda is profoundly anti-human. PETA’s president and co-founder, Ingrid Newkirk, admitted: “Even if animal research resulted in a cure for AIDS [or cancer or other horrible diseases], we’d be against it.”

But that isn’t all.  PETA’s ideological soul mates have filed comments with the Department of Transportation hoping to shut down any medical research with animals, by blocking their transportation. One representative comment said:  “Stop experimenting on animals.  Experiment on your children and mothers instead.” Then the commenter called those who reject the idea of mothers and children being used in medical testing “a bunch of barbarians.” Let that sink in for a moment. These people are unhinged extremists! And they are dangerous!

If you were to assume that PETA simply values animal life on par with human life, you’d be wrong. PETA’s track record on animals is also horrible. For example, in Virginia, PETA activists were charged with criminal animal abuse.  PETA’s kill rate from 2007-2017 — a full decade — averaged 95.3 percent. Simply stated animals who were intended for adoptions were abused and then killed in 95.3% of the cases — over the course of an entire decade!

PETA isn’t a reliable moral compass when it comes to saving human lives or animal lives. They are simply extremists and political activists that seem to hate humans and animals alike, but market themselves as being concerned with animals. It’s a good fundraising gig but if you love animals, you shouldn’t back an organization that abused and killed 95% of the animals entrusted to them.

If we want to keep medical emergencies like the Coronavirus as small events and not see a repeat of previous pandemics, we must stand up for medical research. If PETA is successful, it will slowly cripple our ability to find cures and medical advancements. The Coronavirus is a new problem that must be solved rapidly or not at all. We can’t wait for a decade to find solutions. It will have come and gone by then — killing millions.

The world’s best research facilities are racing to find cures, vaccines, and treatments to make the Coronavirus as non-lethal as possible and to minimize its impact human life and health. But if researchers cannot test their vaccines, treatments and cures on animals first — in a supervised and ethical way — we will see a repeat of previous pandemics where millions die.

We simply cannot cripple our ability to stop the Coronavirus dead in its tracks (and all the other diseases that medical researchers are working on). We must all stand up against the extremists at PETA. We are all animal lovers. But we also love our spouses, grandparents, children and siblings. Let’s agree to have a world where we love animals and humans. We cannot afford to adopt the PETA approach that shows love to neither animals, nor humans.

(George Landirth is the President of Frontiers of Freedom. You can learn more at www.ff.org.) 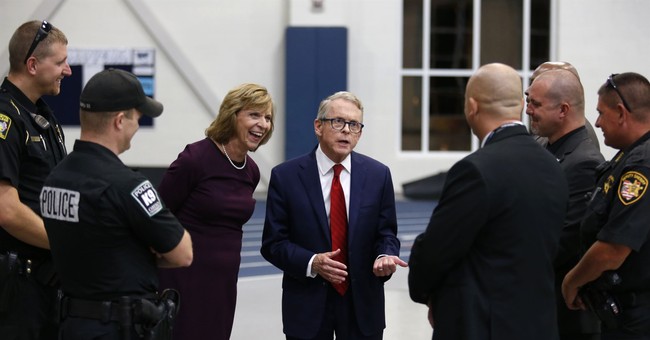 Mike DeWine's Gun Control Bills Are In Trouble In Ohio