More bad news for those who think that Mitt Romney should follow Rachel Maddow’s advice on how to run for President by “ekta-sketching” to the left, now that he is the “presumptive” GOP nominee.

Romney has the leftwing blogosphere and the handful of people who watch media outlets like MSNBC on full battle alert both before and after his appearance this past Saturday morning at Liberty University in Virginia, the college founded by one of the fathers of the Christian right in America, Dr. Jerry Falwell and today run by his son and namesake with unabashedly conservative-Christian principles.

Rachel Maddow’s blog alerted and warned Mitt Romey that he “won’t find the mainstream in Lyncherg” right out in the headline of a recent posting.

In both her advance TV show and then on her blog, the far-left media “celebrity” of MSNBC warns that any attempt to portray himself as a “moderate” in the general election against Mitt Romney would be hurt if he went ahead to speak at Liberty.

“Madcow” Maddow’s blog complains that Romney’s decision to make such an appearance “suggests he’s still concerned about shoring up the religious right’s support – or at a minimum, he’s hoping to win by mobilizing the base, centrists be damned.”

Some here at RED STATE have penned notes in the past suggesting their serous upset when I say that they sound just like Rachel Maddow when they attack the Rick Santorum “values voters” but you can be the judge as her blog complains “whatever the motivation, if Romney’s looking for the American mainstream, he won’t find it at Liberty.

There have always been atheists and more liberal-conservatives (if I may coin a phrase) who think that national defense conservatives (neocons is their name for them) and/or activists motivated by faith, are more of a danger to the Republic, than is Barack Obama and the left.

Over 90% of those who voted for Ron Paul in New Hampshire for example, admitted in exit polls that they had voted in the last election either for Barack Obama or for a third party candidate and that if their candidate does not win, they will do the same thing again in 2012.

To such people – and I’ve read their “comments” here at RED STATE – the worst thing in the world is that Mitt Romney should pay any attention at all to the Rick Santorum values voters.

He made writers like this unashamedly Christian-conservative writer, happy as can be, reading his remarks (see full text HERE).

Lets take a closer look at a few of the actual comments made by Mitt Romney – which I am most delighted to say, sound to me just like what I heard from Rick Santorum and which made the secular-liberal-left so fighting mad.

How dare Romney echo Santorum’s suggestion that “the centrality of faith” is critical to him and worse, how DARE Mitt Romney refer to the crucial importance of the Judeo Christian tradition to the history of America?

Is Rachel Maddow correct – is Mitt Romney sounding very much like Mitt Romney?  And is that bad?

Yes, Mitt Romney has done what this writer has been suggesting for months – echo what both Rick Santorum, Newt Gingrich and other conservatives have complained about and counter attack the “war on faith” in the United States which is being led by Barack Obama.

Mitt Romney did exactly that this past Saturday at Liberty University’s commencement address.

He followed in doing this, in the steps of President George H.W. Bush who spoke at their 1990 Commencement ceremony and spoke of the importance of faith.

Mitt Romney spoke in the tradition of Ronald Reagan, who spoke at Liberty University in 1980.

And as Rick Santorum has done many times during the past primary campaign, Mitt Romney touched on many of the important issues of the day, while proudly speaking of how faith is a critical ingredient for governing successfully.

That of course, will be called “pandering to the Christians” (or the “base” which is of course, made to sound so very base, so very crass and low) and as you surely know, the liberal-secular-left blogosphere is replete with constant references to Mitt Romney’s Mormon faith, and how dare he not mention that?

I’ve suggested in this column that there is plenty that Mitt Romney believes in common with Christians and he ought to speak of it clearly.  He did this past Saturday.

He emphasized not of the differences between him and Christians as the liberal-left wants to do but of what we have in common, who believe with Rick Santorum, in the centrality of faith.

I was fascinated that in his remarks he actually DID refer to the differences – pointing out that those differences are minor compared to what he believes in common with Christians.  And he was very specific about it as you will see.

The third most important part of his remarks, in my view, is that Mitt Romney did not run away from the gay issue fight which President Obama and Vice President Biden stirred up a few days earlier.  He chose to defend marriage, saying, ” Marriage is a relationship between one man and one woman.”

No wonder lesbian leftist Rachel Maddow and the liberal-secular left are all so outraged, as will no doubt, their allies here on these pages who are on outpost duty to make sure that the conservatives don’t act too conservative.

The second most significant thing about Mitt Romney’s remarks at Liberty University is that he did not run but advanced forward with Rick Santorum’s defense of faith, saying this repeatedly but especially in this quote,

“Central to America’s rise to global leadership is our Judeo-Christian tradition, with its vision of the goodness and possibilities of every life.”

Those are, to the liberal-secular left, fighting words that don’t sound like we’d have a President going around the world apologizing for America anymore if Mitt Romney defeats Barack Obama.

And finally we come to my favorite part of his speech, where Mitt Romney clearly answers the S.O.S. call for help from Catholics and other people of faith who are fighting to be free of the enslavement of the HHS “edicts” (their word: mandate) that will force them to carry insurance to help pay for what the Harrisburg Catholic Diocese website called “infanticide services” which defy and contradict their religious teachings.

Said Mitt Romney at Liberty University this past Saturday:

“The protection of religious freedom has also become a matter of debate.  It strikes me as odd that the free exercise of religious faith is sometimes treated as a problem, something America is stuck with instead of blessed with. Perhaps religious conscience upsets the designs of those who feel that the highest wisdom and authority comes from government.”

Mitt Romney spoke of the issues our country faced but he spoke of the shared faith values that unite us and which can produce victory by a united front of conservatives against Barack Obama.

I have excerpted a handful of my favorite paragraphs from the entire remarks (which I do suggest you read in their entirety, HERE), as follows.

Moral certainty, clear standards, and a commitment to spiritual ideals will set you apart in a world that searches for meaning.

…your values will not always be the object of public admiration. In fact, the more you live by your beliefs, the more you will endure the censure of the world. Christianity is not the faith of the complacent, the comfortable or of the timid. It demands and creates heroic souls like Wesley, Wilberforce, Bonhoeffer, John Paul the Second, and Billy Graham. Each showed, in their own way, the relentless and powerful influence of the message of Jesus Christ. May that be your guide.

Central to America’s rise to global leadership is our Judeo-Christian tradition, with its vision of the goodness and possibilities of every life.

The American culture promotes personal responsibility, the dignity of work, the value of education, the merit of service, devotion to a purpose greater than self, and, at the foundation, the pre-eminence of the family.

The power of these values is evidenced by a Brookings Institution study that Senator Rick Santorum brought to my attention. For those who graduate from high school, get a full-time job, and marry before they have their first child, the probability that they will be poor is 2 percent. But, if those things are absent, 76 percent will be poor. Culture matters.

As fundamental as these principles are, they may become topics of democratic debate. So it is today with the enduring institution of marriage. Marriage is a relationship between one man and one woman.

The protection of religious freedom has also become a matter of debate. It strikes me as odd that the free exercise of religious faith is sometimes treated as a problem, something America is stuck with instead of blessed with. Perhaps religious conscience upsets the designs of those who feel that the highest wisdom and authority comes from government.

But from the beginning, this nation trusted in God, not man. Religious liberty is the first freedom in our Constitution. And whether the cause is justice for the persecuted, compassion for the needy and the sick, or mercy for the child waiting to be born, there is no greater force for good in the nation than Christian conscience in action.

Religious freedom opens a door for Americans that is closed to too many others around the world. But whether we walk through that door, and what we do with our lives after we do, is up to us.

…trusting in God and in his purpose for each of us — makes for more than a good sermon. It makes for a good life.

Our worldly successes cannot be guaranteed, but our ability to achieve spiritual success is entirely up to us, thanks to the grace of God. The best advice I know is to give those worldly things your best but never your all, reserving the ultimate hope for the only one who can grant it.

People of different faiths, like yours and mine, sometimes wonder where we can meet in common purpose, when there are so many differences in creed and theology. Surely the answer is that we can meet in service, in shared moral convictions about our nation stemming from a common worldview. The best case for this is always the example of Christian men and women working and witnessing to carry God’s love into every life – people like the late Chuck Colson. 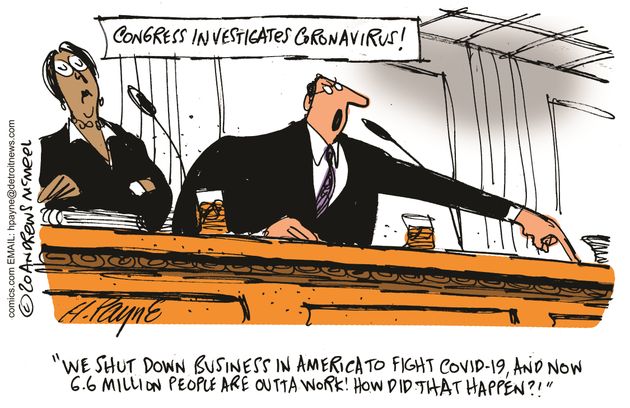 Area Expert™ Tom Nichols just can't bring himself to admit that maybe Tom Cotton's COVID19 questions were valid after all, craps on Cotton instead