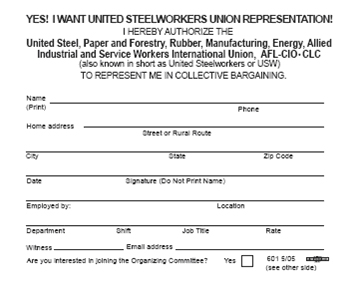 It’s been a fight that has been raging for five years or more: Should workers have the right to decide whether or not to become unionized through a secret-ballot vote, or through signing a union card in front of their peers in a process known as card-check?

Unions have spend an estimated $1.4 billion on getting politicians elected in 2006 and 2008 who have pledged to pass a job-destroying and misleadingly named law called the Employee Free Choice Act (or EFCA).  One of the central provisions of EFCA is the process of card-check.

Card-check simply means that, if a majority of employees (50% +1) sign union authorization cards, the employees are automatically unionized without a secret-ballot election.

President Obama has said that, if passed through Congress, he would sign EFCA into law.

Now comes word that not all unions are in favor of card-check legislation…at least when it comes to their own employees:

An election for union representation has been ordered by the National Labor Relations Board (NLRB) for the United Steelworkers (USW) to represent 66 professional staff of the New York State Nurses Association (NYSNA). The definition of this bargaining union was stipulated through the NLRB on Apr. 9. The employees work in the association’s union program representing registered nurses and other health care professionals in New York and New Jersey.

As a result of NYSNA’s unwillingness to recognize the USW as the collective bargaining representative of its professional employees, the USW filed a petition with the NLRB on Mar. 23. Within the following day, NYSNA proceeded to make unilateral changes to the conditions of employment for the professional staff involved. The USW is now contemplating an unfair labor practice charge.

So, according to NYSNA’s standards, card-check’s okay for thee, but not me?

Yet another fine example of the hypocrisy of today’s union leaders.

Obama’s Labor Secretary Sends Labor Day Message to Notorious SEIU: “You are now…part of the solution.”