Who is Mohamed Elibiary?

I suspect it may be time for the Obama Administration to find a nice, cushy job for Mohamed Elibiary outside of the administration. Elibiary is currently getting unwanted attention for anti-American tweets as well as ISIS reaction to those tweets. Mohamed Elibiary serves on the Department of Homeland Security Advisory board and he appears to have some rather “interesting” views on what ISIS is doing in Iraq.

Kind of comical watching pundits on some US TV channels freak out about an #ISIS “#Caliphate“. Easy folks, take deep breath & relax. #Iraq

So it’s “comical” that people would rightly “freak out” about savages burning a bloody trail across Iraq, leaving dead bodies and decapitated heads in their wake? Okay.

Elibiary wasn’t through. He then proclaimed that the Muslim Caliphate was “inevitable.”

@davereaboi#Silly. As I’ve said b4 inevitable that “Caliphate” returns. Choice only whether we support #EU like Muslim Union vision or not.

The only question left for Mohamed Elibiary was whether or not the United States would support this Muslim version of the EU. Kind of puts into context Obama not “picking sides” in the Iraqi conflict right now and his previous sympathy towards the Muslim Brotherhood.

The question is, how does a guy with such radical ideas, gain a position of such importance? I guess when you’re talking about the Obama regime, anything goes. When will we start asking the question about just exactly where Obama’s loyalties lie? What is his endgame? How many notches does he want the United States knocked down before it will be enough for him?

Weasel Zippers reported that ISIS, the radical beheading bunch currently going through Iraq like Sherman through Georgia, are now using Obama’s DHS advisor Mohamed Elibiary’s Tweet to recruit more radicals. You could essentially consider this aiding the enemy except for one small detail; Obama would never clarify ISIS as the enemy.

This guy Elibiary is no stranger to controversy. In 2011 he was embroiled in a classified document controversy, from Breitbart:

In 2011, evidence surfaced that Texas authorities caught Elibiary downloading classified information to his personal computer and sending it to the media in an effort to smear Texas Governor Rick Perry as an ‘Islamophobe.’ On October 26, 2011, when Congressman Louie Gohmert asked Former DHS Secretary Janet Napolitano about the allegations, she said that she was not aware of them. A few months later, Gohmert would again bring up Elibiary’s misdeeds. Napolitano refused to acknowledge the report, saying the statements were “false, misleading, objectionable, and wrong.” The DHS Secretary never answered the accusations, but she did express that “Muslims have been helping DHS for a long time.”

Read the entire Breitbart report for more interesting factoids about Mohamed Elibiary. It’s simply mind boggling that the President of the United States, regardless of his intentions, would allow a man this controversial to hold a position in such an important department as Homeland Security.

Perhaps I’m looking at this from the wrong perspective, though. Only freedom loving Americans, proud of their country would find these developments frightening. Only radicals like Barack Obama, who appease mass murderers and enable radical terrorist organizations like the Muslim Brotherhood, would find opinions like Elibiary’s mainstream. Let’s not forget, Obama once had an admitted, avowed communist in his administration in Van Jones.

(Cross-posted at Rotten to the Core) The Morning Briefing: The Democrats Want You Out To Be of Work 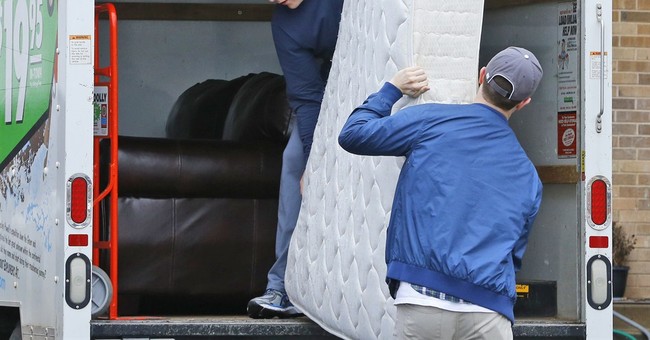 Unmoored Amid the Coronavirus