*Ten Bell Salute to commemorate the Tenth Anniversary of 9/11*

Suave: “He is the man who knows more than you- just ask him.  Paul Krugman!”

Krugman says he doesn’t want to rain on anyone’s parade but he claims “the memory of 9/11 has been irrevocably poisoned” by the likes of George W. Bush and Rudy Giuliani.   Krugman targets America and its quote, ‘fake heroes.’  Krugman claims that the atrocity has been hijacked by George W. Bush and Rudy Giuliani who he says capitalized on the horrible crimes.   And then the attack was used to justify an unrelated war the neocons wanted to fight, for all the wrong reasons.  Krugman produces some nice heat from the crowd with his incessant whining.

Suave interrupts Professor Krugman and asks him isn’t it time to give the conspiracy talk a rest because it’s getting embarrassing.

Krugman waves Suave away and then closes by telling ‘The Voice of PCW’ to go to the first match because he doesn’t want anyone to comment on what he’s just said.

Fox News’s Greg Gutfield takes issue with that and climbs into the ring with Krugman.  Krugman tells him to get out, that intellectually Gutfield isn’t even in the same solar system as he is and he doesn’t want any comments to what he’s say for ‘obvious reasons.’

Gutfield: “The worst part, at the end of his little rant, the creep says  ‘I’m not going to allow comments for obvious reasons.  That obvious reason: He’s a coward. Why else would you ban responses?  He is like a 10-year-old boy crank calling all of us to hang up before he hears the response, hearing shame for his own wickedness.  Now I watched the memorial services and I feel sorry for the families whose grief never ends, but since I’m lousy at emotional reflection, usually I avoid it.  But I can summarize how many feel today in nine words: Go to hell Paul Krugman, you bitter bearded buffoon.”

Suave: “HOLY CRAP!  It’s the Longshoremen, Pete and Russell, from Longview, Washington.  We knew they were coming to PCW but not this soon!”

Malibu Dusty rolls Escondido over and gets the easy pinfall.

Corporate Might:  Big Oil and Kirk Walstreit (R) vs. Big Labor/Triple R (D).
This one never got started.  The Longshoremen (D) came back out again and attacked Big Oil and Walstreit.  After what went down with Independents Blackwell and Escondido earlier,  the entire Republican roster came out to take them on and it was just a bloody chaotic mess.

Suave states that now the PCW Competition Committee will have to decide how to handle this.  Will the #1 contenders match next week be a tag team three way dance?  Stay tuned.

BACKSTAGE
PCW Investigative Reporter Woodward Bernstein tries to interview The Longshoremen.  Bernstein barely gets a word out and Russell and Pete attack him with f-bombs and other unpleasantries.  Finally, they lift Bernstein and give him the ‘ShipWreck’ on the floor and leave.

Tanaka had been on the trail of ‘The One Man Hollywood A-List’ Stone Chism for several weeks before scoring a three-way match for the title along with Khalid-El.  After the Iranian was dispatched, Tanaka destroyed Chism to win the PCW Title.

Suave: “Tanaka’s first title reign would be surprisingly short thanks to a boycott of PCW’s Kingman, Arizona house show by the Democrats over Arizona’s enaction of a controversial immigration law.  Tanaka no-showed the event and under PCW rules he forfeited the title to Average Joe.”

Tanaka regained the PCW Title at Loose Cannons Unleashed 6 in an epic battle with Average Joe that lasted 11 hours and three days.

Suave: PCW Extreme Election Night 2010, the phenomenon known as Jill- Berg got her shot against Tanaka for the PCW title.  Tanaka came out for the match looking as if he’d been hit by a truck.   It was clear from the outset that something had taken place in the back before the match from the sluggish manner Tanaka moved in the ring.   Berg won in 41 seconds.  Then Triple R (D) and ‘The One Man Hollywood A-List’ Stone Chism (D) both came out and took responsibility for the attack on Tanaka to get him out the way so one of them could win the PCW Title.

Suave: “Thank you, Yamamoto Tanaka and good luck to you.”

PCW Women’s Champion Callie Urban (D) is in the ring.  Urban calls out PCW’s Queen of Extreme Valora Salinas (I) to the ring.

Valora walks out and joins Urban in the ring.

Quick video montage of Valora’s ‘path of rage’ through PCW ever since she made her debut a few weeks back.

Urban wants to know what the deal is.  She knows the Democrats not signing her is a sticky point with her and the Triple Threat’s interference costing her a match against Kathryn Randall Collins (D) really pissed her off.  Callie says she’s come out here to give Valora what she wants- a title shot at PCW Lock and Load.

The crowd erupts.  Callie says there’s a condition- the condition is that the path of rage stops.  Urban asks Valora if they have a deal.  Valora nods.

So, it’s on.  PCW Women’s Champion Callie Urban puts her title on the line against Valora Salinas in less than two weeks at PCW Lock and Load.

MAIN EVENT: Round Two of the Lock and Load Play-In
Daniel-San (I) w/Mrs. Miyagi vs. Paul Ryan’s Raiders: Nick Ray and Kevin Collins (R) vs. Triple R (D)
…Daniel-San tries for a sleeper so Triple R kicks him in the nuts twice then ball shots him on the ropes as well. Ray and Collins start involving the audience by borrowing assorted plunder to beat Daniel-San with. More groin shots.  Triple R bashes him with a phone.  Then out of the blue, Ray and Collins turn on Triple R and slam him on a chair.  Double cover…1…2…3.   TRIPLE R eliminated.

…Daniel-San is pissed and to punctuate that statement he punches Ray in the balls.  Collins comes in and gets dumps on his head.  Mrs. Miyagi leans in and chokes Ray with the belt.  Crowd wants blood.  Daniel-San piledrives Collins on the steel chair.   LA-BELL LOCK!  Collins taps.  KEVIN COLLINS eliminated.

…Daniel-san and Triple R get into a brawl outside the ring.  Charlie Blackwell (I) runs out and collides with the referee.  That gives Triple R the opening to run in and cane the crap out of everyone.  Blackwell takes a great shot and the ref is next.  Daniel-San catches Ray with a piledriver.   Blackwell ducks a second cane shot and kicks Triple R in the balls.  Triple R then gets a ride over the top rope.  Daniel-San set for the Crane Kick…Good night Nick Ray!  Cover…1…2…3   NICK RAY eliminated.

The card for PCW Lock and Load in less than two weeks:

New details: What Warren and Bernie said to each other after the debate – HotAir 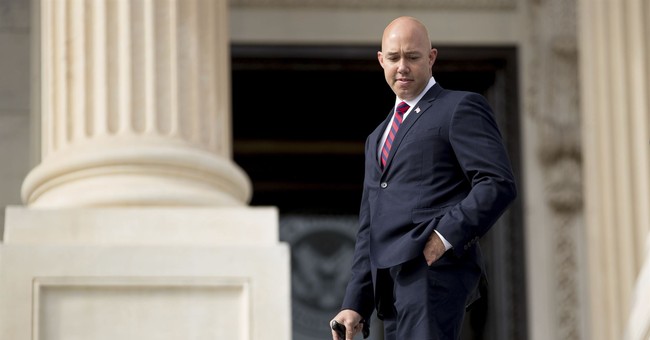