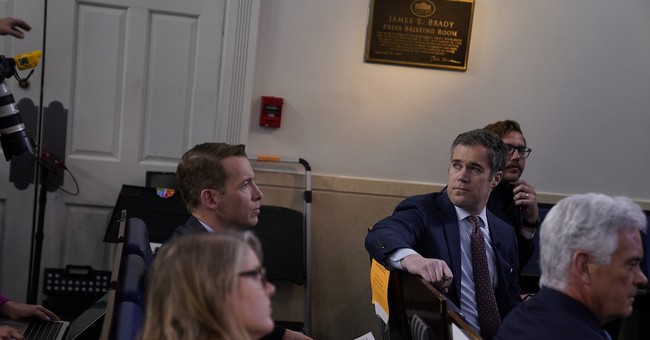 During a briefing on March 19th, Rion triggered her left-wing colleagues by asking President Trump if he thought the term “Chinese food” was racist. He replied that he did not.

In what was a lengthy statement, she began by saying, “The left-wing media has teamed up with the Chinese communist party narratives.” Essentially, she wanted to know if their behavior alarmed him. This, of course, opened up the door for him to criticize the media. The exchange can be viewed in the tweet below. (My colleague, Nick Arama, posted on this story here.)

Listen to this great question @ChanelRion of @OANN
Is it alarming that major media players are are consistently siding w foreign state propaganda, Islamic radicals, and Latin gangs and cartels, and they work right here at the White House with direct access to you and your staff. pic.twitter.com/6IpVcUC5e3

Needless to say, the libs were not pleased with this. Afterward, Rion found the following note on her desk in the press office.

The feud has continued to escalate, with CNN’s Oliver Darcy leading the charge. The situation appears to have evolved into an adult version of the movie “Mean Girls.”

Most recently, another gem, CBS News reporter Paula Reid, noticed that Rion was standing in the back of the briefing room on Wednesday, which was a violation of the White House Correspondents Association’s (WHCA) “social distancing” guidelines. So, she notified the WHCA and a representative asked Rion to leave. Rion refused, according to the tweet below, saying she was a guest of White House press secretary Stephanie Grisham.

OANN reporter once again standing in back of WH Briefing in defiance of social distancing requirements set in place by @WHCA. OANN is in the rotation of reporters who get to attend briefings but seem to think they get to play by different rules & put safety at risk. #COVIDー19 https://t.co/XhPjuib65I

Today, every major newspaper has an article about this reporter. The headline in The Washington Post reads, “OANN threatened with removal from White House press room after correspondent Chanel Rion makes unauthorized appearances” and it can be viewed here. The article, surprisingly written by a male, Paul Farhi, begins as follows:

This time, it was a fairly routine question that Chanel Rion, a correspondent for One America News Network, posed to President Trump during Tuesday’s White House news briefing…

But the brief Q&A raised its own question: What was Rion doing there in the first place?

Under strict new guidelines jointly imposed last month by White House officials and the White House Correspondents’ Association, which represents journalists, access to the cramped briefing room is now restricted to about 15 reporters each day, to enforce social-distancing measures amid the coronavirus crisis, and several smaller news organizations can rotate in only once every several days.

And it wasn’t OANN’s turn on Tuesday. Nor on Wednesday, when Rion showed up in the room again — prompting the correspondents’ association to vote to remove OANN from the rotation.

Farhi describes OANN as “a tiny conservative cable outlet” and questions why the White House would “bend the rules which were designed to ensure the health of journalists, the president and the nation’s top public-health officials — in granting access and a national spotlight to a correspondent from an obscure but Trump-friendly news outlet.”

He includes remarks from ABC News Jonathan Karl, who is the current president of the WHCA. Karl said, “The rules are clear. If you don’t have a seat in the briefing room on your given day, you cannot be there. The rules are established to protect the health of the White House press corps. We’re abiding by the [Centers for Disease Control’s] guidelines.”

He goes into detail about Rion’s politics and her previous experience or lack thereof, and even trashes her fiancé.

She certainly has gotten under their skin.

Incidentally, CBS’ Paula Reid, the one “who told on” Rion, had a testy exchange with President Trump during a briefing last week. I posted on it here. The title is, “Smug CBS Reporter Tries to Ambush Trump at Task Force Briefing; He Swats Her Like a Fly.” She was and he did.

“I think it’s very clear that there are people in your profession that write fake news. You do,” President Trump says to CBS News’ @PaulaReidCBS during the White House coronavirus task force update https://t.co/jDTU91Xjk4 pic.twitter.com/mNTGL4IjOZ