President Donald Trump at Six Months: A Failure of Leadership

Executive orders have defined the bulk of Trump’s successes so far during his tenure, and while I agree with most of what he’s done, executive orders are only good for so long as he’s in office. If Trump loses in 2020, you can mark it down whatever Democrat takes over will reverse nearly all of the EO’s President Trump signed.

Now that we have President Trump’s “victories” out of the way, let’s examine after six months how the president managed to reveal a total lack of ability to lead the way, even with a Congress under Republican control.

Trump’s approval in the Real Clear Politics average sits at 40 percent. It’s an abysmally low number for a new President. Gerald Ford had numbers this low, but he also had the shadow of Richard Nixon and Watergate looming over him. President Trump has no such excuse. The economy is doing relatively well. The stock market is at an all-time high. The country is not in the middle of a major military conflict. Trump should be at a job approval level giving him the political capital to help push through legislation, but instead, he wasted it on his obsession with being the supposed subject of a “witch hunt” of which he provides more ammunition, nearly every day, for Democrats to use against him.

As for the Obamacare repeal debacle, it’s laughable but not at all surprising to see hard-core Trump supporters absolving him of all blame and pinning it entirely on Mitch McConnell and Paul Ryan. The favored scapegoats of Trumpers everywhere, Ryan and McConnell do share some of the blame. After all, they’ve promised to repeal Obamacare starting on the day President Obama signed it into law. But they’re also dealing with a president who is not fully engaged in the process and knows little about the legislation he wants to sign. Trump’s behavior is also so unpredictable and it’s likely Congressional leaders are concerned about what they do, given the president’s inability to maintain focus on moving the ball forward.

A perfect illustration of Trump’s unpredictability comes in the form of having a Rose Garden celebration in early May when the House of Representatives passed the AHCA. “They’re not even doing it for the party,” Trump said at the time. “They’re doing it for this country because we suffered from Obamacare.” A little over a month later, Trump campaigned against the same bill calling it “mean” and saying it needed more “heart” and “more money.” If you’re Paul Ryan, it’s a hair-pulling moment.

With President Trump’s words flipping the tables, it became incumbent upon the Senate to draft a bill different from what their counterparts in the House passed. Once that happened, the entire process went off the rails. The Senate version, while still coming across as too “harsh” for some moderate Republicans, couldn’t pass muster with a handful of conservative Senators. With too many defectors among Republicans and zero support from Democrats, the effort is pretty much dead.

Trump supporters are already absolving the President of blame, saying it is the fault of Congress for not getting a bill to his desk. The attitude reflects a willful ignorance the role presidents play in getting legislation through the House and Senate and to his desk to sign. It also ignores the words of Trump. Here is candidate Trump in 2016:

We will immediately repeal and replace ObamaCare – and nobody can do that like me. We will save $'s and have much better healthcare!

We were let down by all of the Democrats and a few Republicans. Most Republicans were loyal, terrific & worked really hard. We will return!

Trump couldn’t maintain the same posture about Obamacare in a ten-hour span. He tweeted the following at 10:17 pm on July 17:

Republicans should just REPEAL failing ObamaCare now & work on a new Healthcare Plan that will start from a clean slate. Dems will join in!

The next morning he tweeted:

As I have always said, let ObamaCare fail and then come together and do a great healthcare plan. Stay tuned!

President Trump’s inability to maintain a cohesive mindset on any one issue for more than a few days at a time is partially why he sits so low in the polls. He constantly contradicts his people. He’ll do something relatively well only to blow it up within days because of his complete lack of impulse control. He is obsessed about Russia, never shutting up about it and leaving it to spokespeople to handle. He tweets about it incessantly, and as a result, it dominates the news cycle. President Trump is his own worst enemy, and he doesn’t even realize it nor is there anybody around him willing to say it.

People argue, “It’s still early. He can turn things around.” True. He can. But to do so requires change Trump doesn’t care to make. It requires being more engaged with Congressional leaders. It requires less time playing golf and spending a weekend here or there talking with policy experts and getting the information needed to have input when dealing with Congressional leaders. It requires turning off Fox and Friends and forgetting about Twitter to focus on doing work.

Being the president is not the same as throwing your name on bad steaks and bottles of water. It requires discipline, hard work and, as Trump himself said, a willingness to get everybody in a room and hammer out a deal.

That’s leadership. Through the first six months of Trump’s presidency, he’s exhibited none. That is his failure alone. CNN Blasts the President for Daring to Offer ‘Unsubstantiated Hope’ Italian Virologist: Italy Was Slow To Restrict Travel From China Because of Fear of Being Called Racist The Morse Code Ep. 5: China and the Media Sittin' In a Tree America Will Find A Way 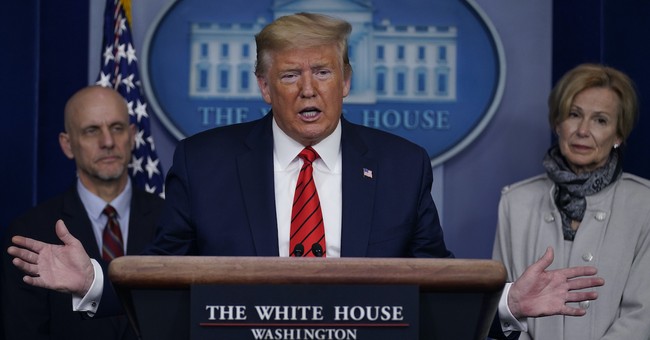