Years ago, our own Dan McLaughlin  defined “swiftboating” as “Accurately quoting a Democratic politician’s own words.”

By that definition, President Obama is being swiftboated up a creek without a paddle right now, as constant repetition of his own words has the campaigner-in-chief and every attack dog he can muster working day and night to “clarify” his remarks on small business.

For review, here’s the president’s direct quote (see it yourself, complete with faux southern accent, here – 0:19-0:25):

“If you’ve got a business – you didn’t build that. Somebody else made that happen.”

That’s right — the president didn’t say “you had help building your business,” or “you didn’t do it on your own”; he said, word for word, “You didn’t build that. Somebody else made that happen.”

The pushback, which is well into its second week now, is an “all hands on deck” effort. The campaign has cut multiple ads, including one that was easily boiled down into 35 more seconds’ worth of egg on the president’s face, and one in which Obama himself, looking slightly away from the camera, says, “Those ads taking my words about small business out of context — they’re flat-out wrong. Of course Americans build their own businesses.”  According to Jen Psaki, the campaign’s traveling press secretary, the latter, in which the president speaks (almost) directly to the camera, was employed because Obama “is an effective communicator.”

If that’s not the rhetorical version of whistling past the graveyard, I’m not sure what it is. To put it another way, most “effective communicators” don’t eclipse two weeks and counting of trying to “clarify” their own remarks.

Additionally, Obama’s July 13 “you didn’t build that” comment was the second remark in seven days that required extensive clarification (the first being the July 7 claim that “the private sector is doing fine,” which required the “effective communicator”-in-chief  to appear in front of cameras the next day declaring, “”It’s absolutely clear the economy is not doing fine. That’s the reason I had a press conference.”).

The AP made sure to do their part in this latest cleanup project, publishing a “news story” on the issue that, like so much from the MSM today, reads like an op-ed written by a member of the Obama team:

…Romney and his allies continue to hammer Obama for comments taken wildly out of context, pummeling the president as a government-obsessed figure who thinks Washington gets the credit for the success of small businesses. That was not Obama’s point…

And Tuesday night, the Obama campaign and the DNC announced that they will “set the record straight” on the president’s remarks…by claiming that it’s Mitt Romney who really “has a horrible record on small business.” Here’s a portion of the perpetually shrill and ineffective Brad Woodhouse’s memo to BuzzFeed:

“In conjunction with OFA, we’re going to turn the page tomorrow on Mitt Romney’s trumped up, out of context fact-checked-to-death BS about the President and small business and set the record straight on how Mitt Romney has a horrible record on small business, a failed record on jobs and who is advocating for policies that are great for millionaires, billionaires, big oil and corporate America – but that would devastate small businesses and stifle job growth and small business expansion. We’ll being done this [Sic] with on the ground events in states which are coming together as we speak and with a national press conference call which will include small business owners and others – including at least one person from MA – who will speak about Romney’s failed record and failed policies as well as President Obama’s record as a consistent advocate for small businesses.

…there is only one candidate in this race who should apologize for his record, positions and attitude towards small business – and that’s Mitt Romney.”

What’s “being done this,” to use Woodhouse the Wordsmith’s turn of phrase, is the equivalent of “Not,” “Said the Liar,” and “I Know You Are but What Am I!” rolled into one and pushed at the presidential campaign level, particularly with regard to Woodhouse’s declaration that Romney is “manipulating video” and Obama’s claim that his opponent is “splicing and dicing” quotes in order to portray the president as having said…exactly what he said.

While it may be effective politics when the people you’re trying to convince are those who are already predisposed to support and agree with you, trying to cover for an obvious weakness by claiming that it’s the opposition who really suffers from it (like the economically-illiterate president’s campaign asking if Romney “even understand[s]  how our economy works“) simply isn’t a convincing strategy in the long term — particularly when it comes to an issue like the economy and job creation, on which Obama’s nearly-four-year record consists of failure across the board.

In closing, Iowahawk clearly has a solution all — including the Obama campaign — should be able to get behind on the president’s supposedly out-of-context “You Didn’t Build That” remarks:  “Just to make sure Obama wasn’t taken out of context, let’s play the whole unedited Roanoke speech on a loop from now till Nov 6.”

Sounds like a winner. Somehow, though, I don’t think Obama, Woodhouse, and the rest of their merry band will be all that enthused about the prospect of the “effective communicator’s” words being played on a loop. After all, there’s always the need to clarify. 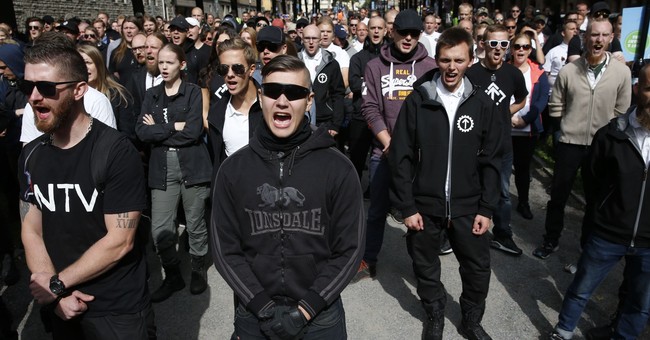 For The Media, Not All Gangs Are Created Equal