UPDATE at 7:19 a.m. on September 12, 2012, by Erick:While all of this is going on in Egypt in Libya, look a bit to the Southeast and Al Jazeera is reporting an attempted assassination of Somalia’s newly elected President while he was meeting with Kenya’s foreign minister.UPDATE at 7:03 a.m. on September 12, 2012, by Erick:American Ambassador to Libya and career member of the Senior Foreign Service, Christopher Stevens, is dead along with three other members of staff from the American Consulate in Benghazi. Ambassador Stevens was being moved to a safer location when he came under attack. Reuters has more information on the report and the violence. Our prayers are with the Ambassador’s family and those of the other fallen foreign service staff.This is the information from the White House on Ambassador Stevens during his nomination process:John Christopher Stevens, Nominee for Ambassador to Libya, Department of StateJohn Christopher Stevens, a career member of the Senior Foreign Service, served as Special Representative to the Libyan Transitional National Council from March 2011 to November 2011. Prior to this role, he was the Director of the Office of Multilateral Nuclear and Security Affairs. From 2007 to 2009, he served as the Deputy Chief of Mission in Tripoli, Libya. From 2006 to 2007, he was a Pearson Fellow with the Senate Foreign Relations Committee. Previous overseas assignments have included: Deputy Principal Officer and Political Section Chief in Jerusalem; Political Officer in Damascus; Consular/Political Officer in Cairo; and Consular/Economic Officer in Riyadh. In Washington, Mr. Stevens has served as Special Assistant to the Under Secretary for Political Affairs, Iran Desk Officer, and a Staff Assistant in the Bureau of Near Eastern Affairs. Prior to joining the Foreign Service, Mr. Stevens was a Peace Corps Volunteer in Morocco from 1983 to 1985. He holds a B.A. from the University of California, Berkeley, a J.D. from the University of California Hastings College of the Law, and an M.S. from the National War CollegeSOURCE.————————[UPDATE by Moe Lane, on behalf of Jeff]: Romney made a pretty in-your-face statement about events today.

Secretary of State Hillary Clinton at least took to task the people who committed violence:

Some have sought to justify this vicious behavior as a response to inflammatory material posted on the Internet. The United States deplores any intentional effort to denigrate the religious beliefs of others. Our commitment to religious tolerance goes back to the very beginning of our nation. But let me be clear:  There is never any justification for violent acts of this kind.

And Barack Obama’s White House? …Well, a senior administration official allegedly told Politico that they disavowed the Egyptian embassy’s comments.  Which means… nothing, really.Please pray for the dead and injured – and their families and loved ones – in today’s attacks, of course.___While America observed the eleventh anniversary of the 9/11 attacks, the U.S. embassies in Cairo, Egypt and Benghazi, Libya were stormed by Islamists angry at a film that is reportedly insulting to Mohammed. The Cairo incident, in which Islamists climbed the embassy walls, tore down and shredded the American flag, and tried to raise an al Qaeda flag in its place, has received the lion’s share of the media attention afforded these attacks. However, the more violent incident may be in Libya – which, of course, received American military support last year in its effort to overthrow a brutal dictator. The U.S. embassy in Benghazi was attacked by Islamist militants with RPGs, machine guns, and grenades, and according to reports, clashes between Ansar al-Sharia and U.S. embassy security forces taking place before “Libyan security forces…withdrew as they came under heavy fire.” One American has been reported killed so far, with “a number hav[ing] been injured in the clashes.”According to Reuters:

Unknown gunmen were shooting at the buildings while others threw handmade bombs into the compound, setting off small explosions. Small fires were burning around the compound.Passersby entered the unsecured compound to take pictures with their mobile phones and watch the looting.No security forces could be seen around the consulate and a previous blockade of the road leading to it had been dismantled.”The Libyan security forces came under heavy fire and we were not prepared the intensity of the attack,” [Abdel-Monem Al-Hurr, spokesman for Libya’s Supreme Security Committee] said.

Both Libya and Egypt made history in the last two years by taking part in the Arab Spring revolutions that saw entrenched dictators overthrown and popular regimes put in their place. However, the aftermath in both nations has highlighted some of the dangers of radical democratization as far as American security and interests are concerned.It goes without saying that the temper tantrums being thrown in Afghanistan, Egypt, Libya, and elsewhere as a result of religious slights are both dangerous and getting very, very old. While publicly insulting acts like Terry Jones’ burning of the Koran are insulting and stupid, there simply isn’t any acceptable excuse on earth for the violent riots and killings that followed Jones’ stunt, and that have broken out in response to this film. Of course, that isn’t new, either; from the Danish cartoons to the arrest of a teacher in Sudan who dared let the six-year-olds in her class name a teddy bear “Mohammed,” there is a segment of the world’s Muslim population that was clearly never taught about “sticks and stones” or about freedom of expression as children. The result has been threats, violence, and death in response to the simple act of free expression.According to Foreign Policy:

[A]s the attack on the Cairo embassy was ongoing, [State Department spokesperson Victoria] Nuland told reporters at the daily briefing that the Cairo protests were “modest” compared to what State has seen in the past.”It sounds like — and I don’t have full details — that this came up pretty quickly, relatively modest group of people, but caught probably us and the Egyptian security outside the embassy by some surprise,” she said. “I would urge you not to draw too many conclusions because we’ve also had some very positive developments in our relationship with Egypt.”

The American staff in Egypt appears to have viewed the crisis quite differently, as they immediately entered apology mode. Rather than defend the freedom of expression that we Americans hold so dear, the U.S. Embassy in Cairo immediately went into apology mode, condemning the use of free expression by Americans and calling selective cases of its exercise “abuse” of the right:

U.S. Embassy Condemns Religious IncitementThe Embassy of the United States in Cairo condemns the continuing efforts by misguided individuals to hurt the religious feelings of Muslims – as we condemn efforts to offend believers of all religions. Today, the 11th anniversary of the September 11, 2001 terrorist attacks on the United States, Americans are honoring our patriots and those who serve our nation as the fitting response to the enemies of democracy. Respect for religious beliefs is a cornerstone of American democracy. We firmly reject the actions by those who abuse the universal right of free speech to hurt the religious beliefs of others

As can be seen from the violence against Americans in Egypt and Libya today, the president’s much-hyped Cairo speech, his Nobel Peace Prize, his promise to make America more respected around the world, his insistence that NASA make one of its primary goals the self-esteem-boosting of the Muslim world, his personal dispatching of Osama bin Laden, and his leadership-from-behind in Libya have all paid significant dividends. As of this publication, the “Gutsy Call” president hadn’t said a public word or released a single statement about either attack, instead effectively leaving the Cairo embassy to speak for him – and speak they did, quite embarrassingly.According to Sam Bacile, an American who wrote and produced the film, “many of the film’s cast quit half way through the production, which he started three or four years ago, because they were afraid of Muslims.” Clearly they were correct to be afraid, and while the accuracy or decency of their film is certainly open to debate, the right to such expression absolutely is not…unless you’re the U.S. Embassy in Cairo, which has decided that it has the authority to condemn the exercise of Americans’ First Amendment rights.The contradiction between the U.S. government’s “condem[nation of] efforts to offend believers of all religions,” aimed as it is toward words and actions that penetrate the paper-thin skin of some Muslims, and the government’s actions regarding Christian beliefs and sensibilities is striking to say the least. While the current administration tries to legally force the Catholic church to violate its own religious tenets, and while the Democratic National Convention loudly boos the inclusion of God once in its platform, the government’s representatives in Cairo are condemning anything that might ever so slightly “offend believers.”Of course, that inclusion of God in the Democrat platform that was so vigorously booed by convention-goers was in the specific context of the source of rights and abilities like that exercised by the people making the film in question. Just food for thought there. 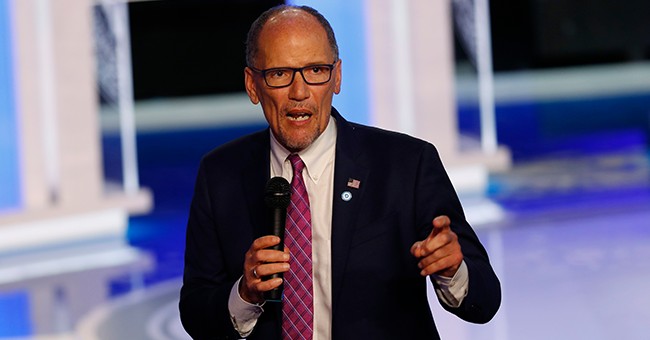