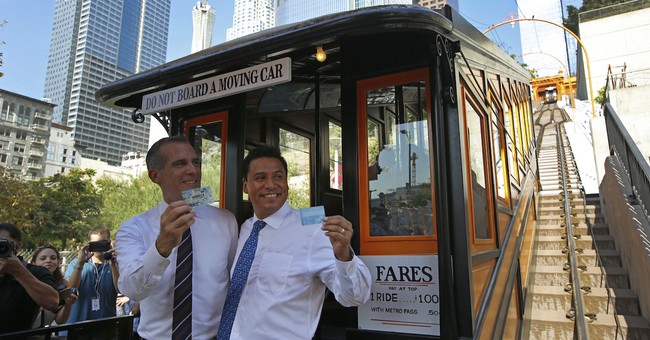 Los Angeles Mayor Eric Garcetti, left, and councilmember Jose Huizar shows their Metro Pass cards as they ride the Angels Flight Thursday, Aug. 31, 2017. Angels Flight, the beloved little railroad that’s almost as much a symbol of Los Angeles as the Hollywood Sign, began pulling people toward the heavens and back down again Thursday after four years of idleness triggered by a 2013 derailment. (AP Photo/Damian Dovarganes)

Former Los Angeles City Councilmember Mitch Englander was indicted in early March, charged with lying to authorities and witness tampering related to the FBI’s investigation into cash and gifts Englander received from a real estate developer who had projects pending before the City Council. Though it was well-known in Los Angeles that the FBI was investigating corruption in City Hall, political watchers expected the first indictment to involve City Councilmember Jose Huizar, whose home and offices were raided by the FBI in November 2018.

Now a lobbyist who also served as a fundraiser for Huizar’s campaign has agreed to plead guilty to federal program fraud, admitting to facilitating a $500,000 bribe of a city councilmember (who is unnamed in the indictment). Justin Jangwoo Kim, who is also a real estate appraiser and developer, will also agree to cooperate with the ongoing investigation.

Somewhere, Mitch Englander is pissed that he only got $15,000 and a VIP night in Las Vegas complete with bottle service and a female escort.

While Kim’s indictment doesn’t name the city councilman who allegedly received the $500,000 bribe, referring to him instead as “Councilmember A” other details in the indictment make obvious that they’re referring to Huizar. The document describes Councilmember A as a member of the council’s Planning and Land Use Management Committee (PLUM) and refers to Kim’s efforts to help a relative of the councilmember get elected to the seat once the councilmember terms out. Huizar terms out in December 2020; until the unfortunate FBI raid on their home, Huizar’s wife, Richelle, planned to run for her husband’s seat.

The 17-page indictment details what really happens in the dirty underbelly of California politics and how the game is played between unions, developers, and elected officials.

The TL;DR version: California labor unions routinely abuse the environmental review process, filing objections at every step along the way to pressure developers to sign collective bargaining agreements, maintenance agreements and other union contracts. When unions filed CEQA objections to a project “Developer C” was building in Councilmember A’s district, the developer negotiated a $500,000 to payment to the councilmember to ensure that the project received favorable treatment in the PLUM committee.

How does Justin Kim fit into this? The indictment provides the details, both entertaining and cringey.

When the union filed a CEQA appeal in the summer of 2016 seeking to halt all construction on the developer’s project, he called Kim and asked him to “obtain Councilmember A’s assistance to deal with the appeal.” (How did the developer know exactly what to do and whom to contact?) Kim then contacted a staffer in Councilmember A’s office, referred to as City Staffer A-1, and arranged a meeting.

A few weeks later, Kim, Councilmember A, City Staffer A-1, and another person met for dinner in LA’s Koreatown neighborhood then hit up a karaoke establishment. For those not familiar with the karaoke establishments in Koreatown, many operate almost as a speakeasy, located in basements of large office buildings, staffed by scantily-clad women and comprised of soundproof private karaoke rooms. In other words, they’re the perfect place to negotiate the terms of a bribe.

(Side note: On the one occasion I visited a karaoke establishment in Koreatown, to celebrate a friend’s birthday, I jokingly said to a friend, “Are we sure this isn’t really a brothel? The guests are mainly men and they don’t seem too interested in selling booze and food…” When we looked up the place a few months later so we could go back for another friend’s birthday, we saw that it had been closed down after a prostitution raid. True story.)

Developer C joined the group at the karaoke bar and Councilmember A agreed to help – but the terms were not hashed out for months. In January 2017 City Staffer A-1 told Kim that a lobbyist would charge Developer C between $1.2 and $1.4 million to get the project through city approvals. Developer C then offered Councilmember A a $500,000 payment and assurances that they’d support Councilmember A’s relative’s eventual City Council campaign.

In that scenario, Councilmember A’s actions seem to border on extortion.

It’s clear that the feds aren’t releasing all of the details now, and it’s likely that other councilmembers and city staffers aren’t sleeping too well these days.