Dennis Prager Calls Anti-Trump Conservatives to War; No Thanks

In a column today at National Review, Dennis Prager gives his take on those conservatives (like myself) who haven’t yet and most likely won’t jump on board the Trump Train. Prager is a guy with class so the piece is not a polemic but he still gets a lot wrong. Like many of the arguments from pro-Trump conservatives, it expresses an imperative that anti-Trump conservatives “fight” on Trump’s side while neglecting to say what “fighting” means.

When people you know well and admire, and who share your values, do something you strongly oppose, you have two options: (1) Cease admiring them or (2) try to understand them and change their minds.

Actually there are three options. The third is to try to understand them and be open to changing your own mind. Anti-Trump conservatives have had people whom they admire, like Prager, do something they strongly oppose as well. We’re in the same boat in that respect.

I’m open to hearing arguments that might change my mind but any such argument would have to begin with an accurate expression of what I currently believe and an explanation as to why I’m wrong. Prager acknowledges this requirement but he doesn’t really fulfill it.

But to try to change their minds, I must first try to understand their thinking. I have concluded that there are a few reasons that explain conservatives who were Never-Trumpers during the election, and who remain anti-Trump today. The first and, by far, the greatest reason is this: They do not believe that America is engaged in a civil war, with the survival of America as we know it at stake.

While they strongly differ with the Left, they do not regard the left–right battle as an existential battle for preserving our nation. On the other hand, I, and other conservative Trump supporters, do.

That is why, after vigorously opposing Trump’s candidacy during the Republican primaries, I vigorously supported him once he won the nomination. I believed then, as I do now, that America was doomed if a Democrat had been elected president.

For more than a decade, every election was sold as “the most important election of our lifetime” which probably makes for fantastic talk radio ratings but it also helped create the sort of hysteria that made Trump’s rise to power possible. Speaking for myself, I think part of the anti-Trump sentiment is a recognition that hysteria is not a strategy. The left-right struggle is an existential one but it is a far larger struggle than any one candidate or election.

With the Supreme Court and hundreds of additional federal judgeships in the balance; with the Democrats’ relentless push toward European-style socialism — completely undoing the unique American value of limited government; the misuse of the government to suppress conservative speech; the continuing degradation of our universities and high schools; the weakening of the American military; and so much more, America, as envisioned by the Founders, would have been lost, perhaps irreversibly. The “fundamental transformation” that candidate Barack Obama promised in 2008 would have been completed by Hillary Clinton in 2016.

First let’s point out that absolutely nothing is being done by either party to uphold the “unique American value of limited government.” At best Republicans offer a slightly less intrusive federal government which bears more resemblance to what the Democrats want than to the America envisioned by the Founders. We need to disabuse ourselves of the notion that the “R” next to a politician’s name means he or she is devoted to constitutionally limited government. It’s simply not true.

If Hillary Clinton meant the end of America, then America was already over. America’s decline didn’t originate with Barack Obama. It wouldn’t have been completed by Hillary Clinton. The fundamental transformation has been happening for a better part of a century. It is still happening now. It’s a cultural problem more than a political one. It cannot and will not be corrected with one election. The right is trapped in a four year cycle of panic because too many people believe that winning elections solves cultural problems. Because of this they will settle for virtually any candidate no matter how terrible, even a reprobate billionaire game show host hated by more than half the country.

To my amazement, no anti-Trump conservative writer sees it that way. They all thought during the election, and still think, that while it would not have been a good thing if Hillary Clinton had won, it wouldn’t have been a catastrophe either.

This is somewhat true. However, one can see something as a catastrophe without seeing it as permanent or apocalyptic. Rather than being amazed, Prager should probably ask people why they don’t buy in to the doomsday prophecies anymore.

That’s it, in a nutshell. Many conservatives, including me, believe that it would have been close to over for America as America if the Republican candidate, who happened to be a flawed man named Donald Trump, had not won. Moreover, I am certain that only Donald Trump would have defeated Hillary Clinton.

Similar arguments were made concerning Barack Obama’s reelection. If they were accurate there shouldn’t have been an America left to save. The pro-Trump conservatives seem to exist in an eternal now, where they never go back and check their earlier work. What was said a few years ago no longer exists because we have to deal with this new crisis (and always in the manner of decapitated chickens). Consistency no longer matters.

(As to Prager’s certainty that only Trump could have beaten Hillary Clinton’s disastrous campaign: that and $20 will get you a “Make America Great Again” cap.)

The left-right struggle is a long one and needs a long term strategy, something which the left still has and the right still hasn’t realized it needs. Making one election the fulcrum upon which America’s future existence hinges is probably great for talk radio ratings and page views, but it’s wild hyperbole and in the long run counterproductive.

In addition, anti-Trump conservatives see themselves as highly moral people (which they often are) who are duty-bound not to compromise themselves by strongly supporting Trump, whom they largely view as morally defective.

Perhaps it’s a sign of Prager’s own elitist streak that he doesn’t acknowledge those of us who are currently defending the anti-Trump position barefoot, in raggy shorts and a 20 year old t-shirt, while some leftover sloppy joes are warming on the stove. I would rather roll naked in poison ivy than attend an elite DC dinner party. It is as ridiculous to say a NeverTrump position is taken for the purposes of eating bad food with boring people as it is to say that NeverTrump bears any resemblance to or association with the likes of Maxine Waters.

And Trump’s election was not a baptism. He remains as morally defective as he ever was, despite his claim he has nothing for which to ask forgiveness.

Finally, these people are only human: After investing so much energy in opposing Trump’s election, and after predicting his nomination would lead to electoral disaster, it’s hard for them to admit they were wrong.

As the pro-Trumpers often say to legitimate criticism of the president: YAWN.

Similar things can be said about those who abandoned principles to support Trump’s election. After sacrificing so much integrity, admitting buyer’s remorse must be quite difficult. And far too much is made of electoral predictions in this debate. Even pro-Trump people expected him to lose. You could tell by the anger and vitriol they spewed on social media after the victory. They were clearly prepared to blame and attack, not celebrate.

My opposition to Trump’s nomination actually had as much (maybe more) to do with the possibility that he would actually win. I didn’t think he would, but I knew if he did conservatism would end up being equated with Trumpism, damaging the brand for who knows how long.. That prediction came true.

Prager does get one thing right. I don’t believe America is engaged in a civil war.

Political turmoil, yes, but to call it “war” is unnecessarily inflammatory. War means guns and bombs and people dying and killing on battlefields. Too many people are resorting to using this metaphor. At least I hope it is only a metaphor. It’s a disturbing trend because “war” can be used as justification for very bad moral compromises.

They can join the fight. They can accept an imperfect reality and acknowledge that we are in a civil war, and that Trump, with all his flaws, is our general. If this general is going to win, he needs the best fighters. But too many of them, some of the best minds of the conservative movement, are AWOL.

I would argue that they are the remnant of the conservative movement, refusing to abandon it for Trumpism.

I beg them: Please report for duty.

I wrote about  Sean Hannity and Lou Dobbs using such martial language last week. Those who don’t love Trump are being called out for not fighting for Trump. What does that even look like? For what duty are we being asked to report? Seriously, someone answer that for me. What does that mean?

Does it mean agreeing that media bias justifies physically attacking reporters for asking a question?

Does it mean not pointing it out when the President has difficulty telling the truth?

I’m not joining up if it does. Pass.

Instead, I’ll praise what’s praiseworthy while reserving the right to call out Trump or anyone else for saying, doing, supporting, or otherwise abetting anything terrible. 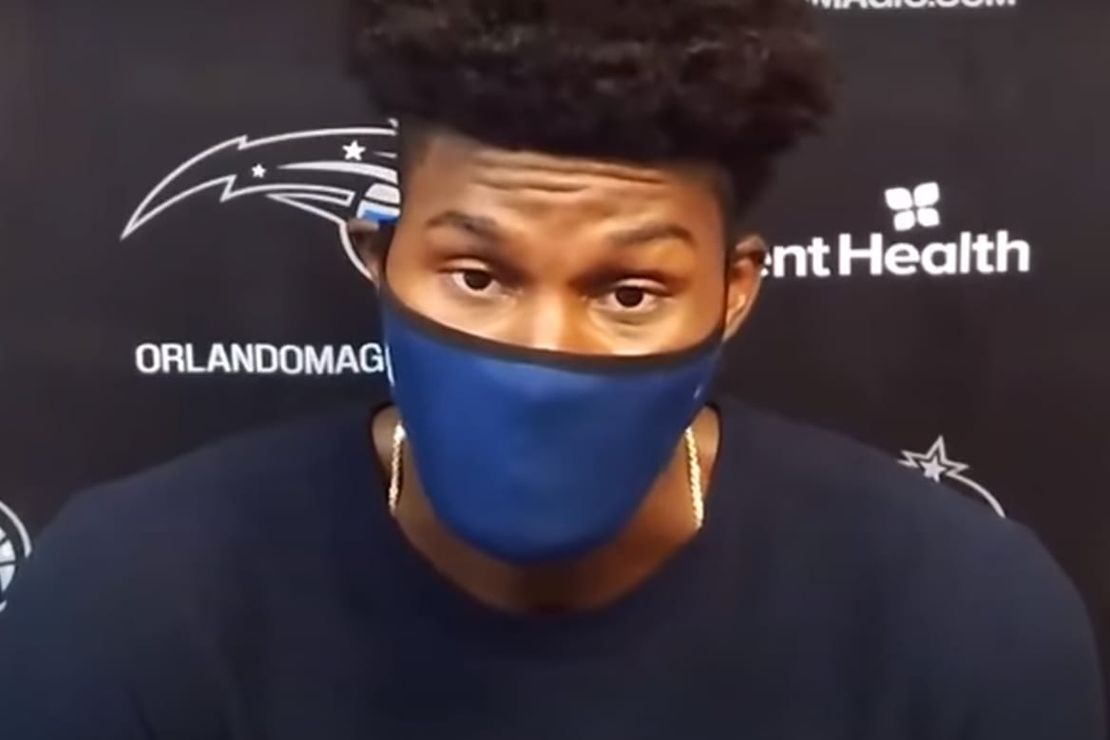 Power Forward: While Everyone Else Around Him Kneels, the NBA's Jonathan Isaac Stands