In the Face of Pandemic, the U.S. Senate Sells Stocks and Plays Politics With Our Lives 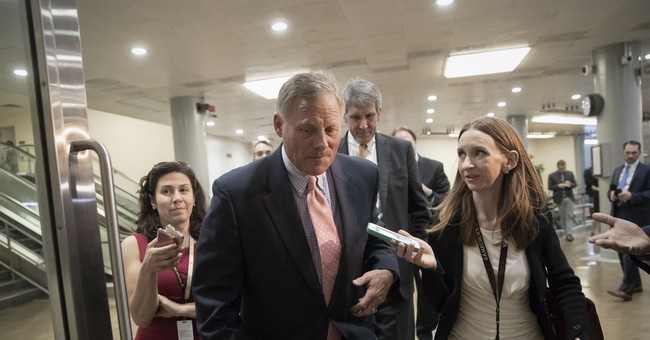 Sen. Richard Burr, R-N.C., chairman of the Senate Select Committee on Intelligence, arrives as House and Senate lawmakers from both parties gather for a classified briefing in a secure room about the federal investigation into President Donald Trump’s 2016 campaign, on Capitol Hill in Washington, Thursday, May 24, 2018. (AP Photo/J. Scott Applewhite)

On Thursday night, news broke of two Republican Senators, Richard Burr of North Carolina and Kelly Loeffler of Georgia, dropping some serious stock after an all-Senators meeting where they received a briefing on the Wuhan coronavirus. We’re talking stock sales in the millions.

It’s an egregious abuse of power, if this is a case of insider trading, and there are calls from all over for both of them to resign. Tucker Carlson even lit Burr up on his show and demanded he resign. It’s a bi-partisan thing right now, because we’re in the middle of a pandemic and American citizens are terrified. What do these two do when they catch wind of how bad it’s going to be? They get rich off of the crisis.

For Loeffler’s part, she says the transactions were made by a third party broker, and she was not aware of the sale until weeks after.

As confirmed in the periodic transaction report to Senate Ethics, I was informed of these purchases and sales on February 16, 2020 — three weeks after they were made.

I have supported Loeffler’s re-election bid in Georgia, and I’ve done it right here at RedState. I’m not a fan of Doug Collins, and I’m not suddenly doing a 180 on this. But there needs to be full disclosure here, and Loeffler and Burr both need to explain this fully. There needs to be enough evidence that can fully clear this, because it looks bad.

If she and Burr did do this based on insider information, I hope they are prosecuted for it. However, while they are certainly egregious actors in this, I find it highly unlikely they would be the only ones. I fully expect – and maybe hope just a bit – that more people in government will be implicated.

The timeline here, though, brings to light so many more questions that the American public needs answers to, and they need them immediately.

This briefing that Loeffler and Burr (allegedly) based their stock sales from was held on January 24. On January 31, President Donald Trump banned all travel to and from China. Clearly, he was informed that something major was going on. So if this briefing that the every U.S. Senator apparently got was dire enough to make the greediest go out and make big financial decisions over it, why in God’s name did Democrats attack Trump for stopping travel to and from China?

If every Senator was indeed at that meeting, why did Chuck Schumer go and politicize Trump’s move in order to score a political point? Why did other Democrats follow suit?

This seems not just irresponsible, but dangerous to the American public. Chuck Schumer played politics with Americans’ lives in order to try and attack Trump for making what was ultimately the right move.

There is a pandemic going on. It is so important that some people apparently realized it would tank certain stocks. So, naturally, Schumer’s first move is to attack the Republican President for the actions he took in trying to mitigate the virus’s impact in America. Absolutely brilliant.

Let’s also not forget that each of these Senators knew enough about how bad it was going to be that they decided to make these decisions at our expense… months before we knew how bad it was going to be. And not one of them thought “Hey, the American public really needs time to prepare for this. Don’t go panicking them or anything, but maybe just get the word out now so we can take steps.”

Instead, it appears every one of them played their own little games with the information and left us to fend for ourselves.

That’s not governance. That’s recklessness in the face of a threat that will cost many Americans their livelihoods (if not their lives). But, that’s how Washington D.C. has chosen to operate. That is how they have decided to live their lives.

You should not be forgiving of anyone here. Demand that they own up and take responsibility for what they’ve done to a country they are supposed to be governing. In the face of a life-threatening pandemic, they have forsaken the people that put them into office.

At this point? Maybe just fire them all and start over. The Worst Time for Congressional Partisanship

President Trump Is Considering Quarantining Parts of the Northeast