NYT Editor and Brian Williams: Bloomberg Could Have Given Every American $1 Million With the Money He Spent on Ads 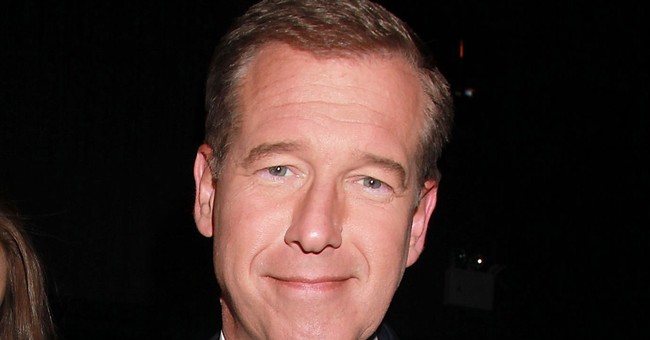 FILE – This April 4, 2012 file photo shows NBC News’ Brian Williams, at the premiere of the HBO original series “Girls,” in New York. NBC News says that Brian Williams will not return to his job as “Nightly News” anchor, but will remain anchor breaking news reports at the cable network MSNBC. Williams was suspended in February for falsely claiming he had been in a helicopter hit by enemy fire during the Iraq War. NBC launched an internal investigation that turned up other instances where Williams embellished or misrepresented his experiences, frequently during appearances on talk shows. Before his swift tumble, Williams was arguably the most powerful on-air personality in television news. Lester Holt, who has been subbing for Williams since the suspension, will take over the job full-time. (AP Photo/Starpix, Dave Allocca, File)

I’ve started this sentence three times already. I hardly even know how to describe what I saw on social media tonight. In the most bad-at-math tweet I’ve ever seen in my entire twitter life, Mekita Rivas – A WRITER WITH BYLINES IN GLAMOUR MAGAZINE AND THE WASHINGTON POST – lamented that Bloomberg’s half a billion in ad money could have provided one million dollars for every American and still have money to spare.

This seems bad. It is bad. But it gets worse.

Mara Gay – NEW YORK TIMES EDITORIAL BOARD MEMBER – was on MSNBC with Brian Williams – YES, THAT BRIAN WILLIAMS – when he brought up this tweet that put it “all in perspective” for the longtime new analyst and noted lover of fish tales. You may imagine that at some point in this video one of them thinks about the math. They did not.

MSNBC’s Brian Williams reads a tweet: "Bloomberg spent $500 million on ads. U.S. Population, 327 million. He could have given each American $1 million"

I kept expecting someone to say something, stop filming, cut to commercial. How does this happen?

I can’t decide which is indicted worse – our education system, mainstream media in general or The New York Times and MSNBC specifically.

Mekita Rivas wisely locked her account but at the time of this publishing Mara Gay’s account remained open to the public. You’ll notice Mekita added a small mea culpa before signing off.

We’re doomed. But at least Twitter had some fun.

Brian Williams just shared this on screen like it was accurate, and did it with enough confidence he had me pulling out a calculator and thinking *I* was tripping. pic.twitter.com/YtUfV0LuqX

What kind of raggedy ass math did Brian Williams just do? #11thHour

“It’s an incredible way of putting it.” I can’t believe you’re ever going to mention math again in public after that MSNBC appearance. Guys, Bloomberg has some 'BREAKING' news on China that you just won't believe...