Cheer Up! Hallmark Will Be Running a Christmas Movie Marathon to Help Us Through Self-Quarantines 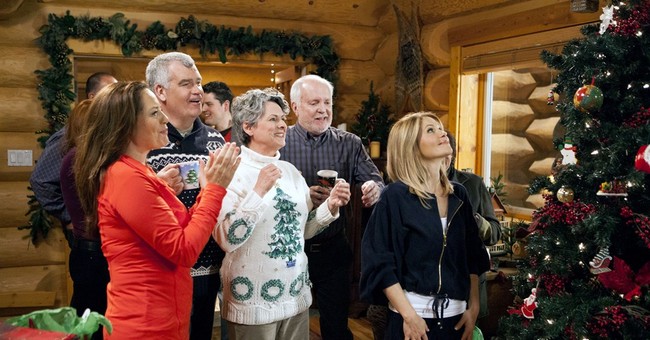 This image released by Crown Media shows a scene from the Christmas TV movie “Let it Snow,” one of the films to air on Hallmark TV channels for a week, beginning on Independence Day. The stunt on the Hallmark and Hallmark Movie channels continues into the early morning hours of July 15. Mostly, it will be repeats of the holiday movies that Hallmark traditionally airs during the last two months of the year. (AP Photo/Crown Media)

Some people around the country have been putting their Christmas lights back up in order to foster a little cheer and hope in these bizarre times.

Now comes news of an even greater gift, one that could spur the entire country to heal itself by blasting our nervous systems with extremely high doses of saccharin and warmth.

The Hallmark Channel has announced they will be running a Christmas movie marathon during America’s self-quarantine.

ET Online reports the marathon will begin on Friday, March 20.

The weekend marathon, a response to fans’ desires for a dedicated lineup of feel-good movies to help pass the time amid the coronavirus outbreak, culminates Sunday, March 22 at 6 p.m. ET/PT with Christmas in Rome starring Lacey Chabert.

ET Online has very generously printed the schedule. I’m sad…and proud…to say I’ve seen most of these and this truly is the “greatest hits” treatment. Here’s my breakdown of the movies I’ve seen…

12:00 p.m. ET/PT: A Christmas Detour
Stars: Candace Cameron Bure (“Fuller House”) and Paul Greene (“Bitten”) – Ok, haven’t seen this one but CCB is Hallmark royalty and she always has a fun energy in these kinds of movies.

4:00 p.m. ET/PT: A Christmas Love Story
Stars: Kristin Chenoweth (“Glee”) and Scott Wolf (“The Night Shift”) – Actually a genuinely good movie and a bit more serious than the typical Hallmark fare. Production value was very good. I may have even shed a tear in this lovely story about love, sacrifice and choosing life.

6:00 p.m. ET/PT: Mingle All the Way
Stars: Jen Lilley (“Days of Our Lives,”), Brant Daugherty (“Pretty Little Liars”) and Lindsay Wagner (“The Bionic Woman”)- Once again, my favorite Hallmark plotline – fake relationship to impress parents/boss that turns into a real relationship over hot cocoa and snowball fights. This one isn’t my favorite, though. Lack of chemistry in the leads and not enough Lindsay Wagner.

8:00 p.m. ET/PT: Christmas Under Wraps
Stars: Candace Cameron Bure (“Let it Snow”), David O’Donnell (“12 Wishes of Christmas”), Brian Doyle-Murray (“The Middle”) and Robert Pine (“Frozen”) – Another fun CCB movie that includes another Hallmark favorite plotline – big city gal/guy moves to small town and finds out what Christmas and love are really all about.

10:00 p.m. ET/PT: Crown for Christmas
Stars: Danica McKellar (“The Wonder Years”) and Rupert Penry-Jones (“Black Sails”) – Danica McKellar has such a perfect sweetness in these movies. I always enjoy a good, “simple girl learns about the royal life” story.

12:00 a.m. ET/PT: The Christmas Cottage
Stars: Merritt Patterson (“Forever in My Heart”) and Steve Lund (“Reign”) – Perfect for quarantine…two people stuck in close quarters with nothing to do but discover the true meaning of Christmas together.

3:30 a.m. ET/PT: Marry Me at Christmas
Stars: Rachel Skarsten (“Reign”) and Trevor Donovan (“90210”) – Another version of the “simple girl meets royalty” is “simple girl meets celebrity.” This one isn’t a favorite but it’s cheesy enough to be fun.

5:00 a.m. ET/PT: A Very Merry Mix-Up
Stars: Alicia Witt (“Orange Is the New Black”) and Mark Wiebe (“Sweet Karma”) – One of my favorites. A single mom has to secretly take on a job as a mall Santa. Hijinks ensue when she becomes her hot boss’s confidante, as Santa. There is a precocious child and plenty of hot chocolate in this one.

7:00 a.m. ET/PT: Christmas at Graceland: Home for the Holidays
Stars: Adrian Grenier (“Entourage”), Kaitlin Doubleday (“Nashville”), Priscilla Presley and Chase Bryant – This movie is very terrible but in the best of ways. This is part of a new strategy Hallmark is trying by tying popular holiday landmarks to specific scripts. Smart!

1:00 p.m. ET/PT: Christmas at Dollywood
Stars: Danica McKellar (“The Wonder Years”), Niall Matter (“Eureka”) and Dolly Parton (“Dolly Parton’s Coat of Many Colors,” 9 to 5) – Another “location” project and it works. Yes, Dolly is in it. Yes, she sings. Yes, you’ll smile.

3:00 p.m. ET/PT: The Nine Lives of Christmas
Stars: Brandon Routh (“Superman Returns”) and Kimberley Sustad (“A Bride for Christmas”) – Probably my second favorite Hallmark movie of all time. This one is genuinely entertaining and has one of the more unique plots you’ll see in the Hallmark universe.

7:00 p.m. ET/PT: Christmas Town
Stars: Candace Cameron Bure (“Fuller House”), Tim Rozon (“Schitt’s Creek”) and Beth Broderick (“Sharp Objects”) – CCB does this plotline very well – busy businesswoman too busy for love finds herself in a small town where a handsome stranger teaches her the true meaning of Christmas. Ya know…like ya do.

4:00 a.m. ET/PT: Coming Home for Christmas
Stars: Danica McKellar (“The Wonder Years”), Neal Bledsoe (“The Mysteries of Laura”) and Andrew Francis (“Chesapeake Shores”) – A spin on the “simple girl/royal family” plot only this time Danica McKellar is a simple girl dealing with a rich family. There’s a cantankerous grandma and a hysterically unsexy playboy brother. Worth the watch.

6:00 a.m. ET/PT: Christmas Wishes & Mistletoe Kisses
Stars: Jill Wagner (“Teen Wolf”), Matthew Davis (“Legacies”) and Donna Mills (“Knots Landing”)  –Jill Wagner isn’t my favorite Hallmark queen but she has a following (yes, the Hallmark ladies have followings). This movie I like because Donna Mills is still so lovely to look at.

8:00 a.m. ET/PT: Pride, Prejudice & Mistletoe
Stars: Lacey Chabert (“Mean Girls”) and Brendan Penny (“Chesapeake Shores”) – Exactly what it sounds like. Not my favorite because I think Chabert should leave the “busy businesswoman too busy for love” roles to CCB.

4:00 p.m. ET/PT: Write Before Christmas
Stars: Torrey DeVitto (“Chicago Med”), Chad Michael Murray (“Riverdale”), Grant Show (“Dynasty”), Lolita Davidovich (“How to Get Away With Murder”) and Drew Seeley (“Glory Daze”) – I like this one because it included a middle-aged love story, which you don’t get to see much of on this channel. In the Hallmark universe, everyone is either young, cute and looking for commitment or old and has been married forever. There’s no in-between.

6:00 p.m. ET/PT: Christmas in Rome
Stars: Lacey Chabert (“Mean Girls”) and Sam Page (“The Bold Type”) – I love Chabert. But don’t watch this for the plot. Watch it for all the terrible advice on touring Italy and for the terrible set pieces.

WATCH: Members of the Georgia National Guard dance the 'Macarena' shortly before curfew