To properly understand the true commitment that the Post-modern American University makes to robust, open debate and diversity of thought, it helps to remember what happened when a Women’s Studies Professor at University of California Santa Barbara encountered an anti-abortion protest on her campus. The Professor, Mireille Miller-Young, noticed that 16 Year-Old Girl, Thrin Short, of Survivors of The Abortion Holocaust, was holding up a graphic 3’ X 5’ sign that apparently lacked the requisite Trigger Warning. Thus, after meticulously checking her privilege, Professor Miller-Young engaged the young lady in a vivacious and meaningful Socratic dialogue,…Oh, wait…

A department of feminist studies professor has been accused of going berserk after coming across a campus prolife demonstration that used extremely graphic displays, leading a small mob of students to chant “tear down the sign” before grabbing one of the signs, storming off with it, then allegedly engaging in an altercation with a 16-year-old prolife protestor who had followed the educator to retrieve it

This is not a surprising development. The vast majority of the academic profession has aligned itself with Leftist ideologies and has steadily grown older, more dogmatic and more reactionary in defense of its ideology. As these ideologies have grown old and utterly uncreative, the “Progressive” ideology has increasingly become “Purificationist” in nature. The Progressive now no longer evangelizes progress, but rather burns as witches the heretics that stand in its way. This has led to the rise of Speech Codes, the Check Your Privilege Movement, Trigger Warnings, and a host of other authoritarian, anti-freedom measures intended to censor and punish any argument this hegemonic Leftist, Totalitarian ideology did not agree with.

Like any INGSOC, the Purificationist hegemony of the campus needs a nefarious Goldstein to unite the various hues of the Homogenous Diversity Rainbow in a shared execration of the Abominable Other. In a recent study of faculty religious beliefs on several campuses two persistent patterns emerged. The faculties felt most negatively about Evangelical Christians and they were in unanimity that Evangelical Christians had no business bringing their beliefs into American politics. Thus, with the closing of the American Academic Mind and the deliberate and tactical deployment of its condescending bigotry against The Evangelical Christian, the assault by a UCSB faculty member against a 16 year-old anti-abortion demonstrator was as predictable in hindsight as the sun setting in the West. Professor Miller-Young was doing exactly what Post-modern American Academic Culture taught her was acceptable behavior. To be a real intellectual, you have to violently extirpate anyone who disagrees with what you say. “Shut up!” is how a teacher properly explains the world.

Persuasion does not work against people whose primary logical syllogism is “Shut up!” There is no good faith negotiation with an ideology of book-burners straight out of Fahrenheit 451. So you do things The All-American Way and you sue their butts off! No, seriously. If they infringe upon your rights, and they refuse to allow you access to a valuable societal resource purely based upon their intolerant and arrogant belief that your fundamental beliefs and view of the world make you unworthy of being part of Polite Society, then you have to take overwhelming corrective action to force these vile reincarnations of The Pharisees to stop being evil.

Since no individual of sanity or decent reason would advocate or participate in chucking hundreds of Molotov Cocktails at The Christopher Wren Building or The MIT Chapel, the most powerful option short of violence is massive recourse to the law. The Foundation for Individual Rights in Education has decided to do exactly that. They will now be suing each and every college or university in America that insists on infringing upon the Constitutional Rights of students attending these institutions.

With help from the law firm of Davis Wright Tremaine, FIRE is suing several universities that manifestly and unconstitutionally deprive their students of First Amendment rights. “Universities’ stubborn refusal to relinquish their speech codes must not be tolerated,” said FIRE President Greg Lukianoff during a press conference. For now, suits have been filed against Ohio University, Iowa State University, Chicago State University, and Citrus College in California. These universities have all trampled students’ free speech rights, according to FIRE.

All Democracy is based upon reasonable parties accepting adverse results from ongoing arbitration. That is what Democracy exists for. It is a non-violent means of waging the ideological warfare that would otherwise break out amongst the shaved monkeys peopling any culture or society. When one party to that arbitration refuses to accept reasonable results or uses a position of power to refuse to give the other side fair standing, Democracy has failed and the gloves have got to come off.

At the Post-modern American University the time has now come to fight fire with FIRE. So if the college or university you attend attempts to enact Speech Codes, make you preface any unpopular opinions you may hold with “Trigger Warnings”, check your privilege because you disagree with The Diversity Matrons, or kick your organization off of campus for promoting Evangelical Christianity then the proper recourse is for you to get in touch with FIRE post-haste so that your college or university can be sued for its despicable commitment to evil totalitarianism as well.

Antifa Guy’s Feet Get Lit up by Molotov Cocktail From His Buddies; Internet Reacts

'They are ready for war': Antifa is showing our veterans what they are up against and LOL ... this can't be real (watch) 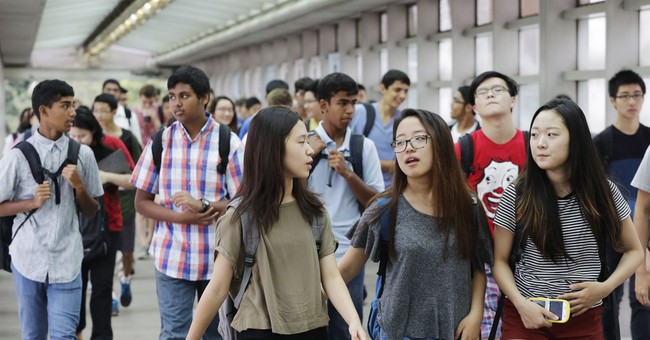