You can blame this whole kerfuffle on Bobby Riggs and Billie Jean King.

Back in 1973, a tennis hustler named Bobby Riggs began talking smack about women’s tennis. (In fact, the trolling he did of the feminist movement is rather epic. If you listen to his interview you’ll recognize his cadence and speech pattern as being very similar to someone in the spotlight today. His basic points were that men’s and women’s tennis were not in the same class and that the only reason to watch women’s tennis was to see cute girls (Billie Jean King was an exception to this attraction, obviously) in short skirts bounce about the tennis court. He had and has a point (though there are very obvious exceptions to the “cute” part of the attraction playing today, too). In short order, the 55-year-old Riggs beat the top seeded woman player, Margaret Court. He lost to Billie Jean King in the “battle of the sexes” but now it seems as though he threw the game. The upshot of this was that feminists began insisting that there was actually no qualitative difference between men and women athletes.

Women’s sports has been afflicted with schizophrenia about it. One the one hand we are supposed to accept the top women athletes as on par with the top male athletes in the same sport. On the other hand we are supposed to support women’s sports and the force of law, that would by Title IX of the Higher Education Act, is used to ensure there are athletic opportunities for women. So we regularly hear sportscasters refer to Abby Wambach as the highest scoring soccer player of all time, for instance:

The second goal tied Hamm’s mark of 158 and the third broke the record, giving Wambach 159 goals in her international career. UPDATE: Wambach has added a fourth. Her career total stands at 160.

That number is greater than any male soccer player has ever scored.

This is said with a straight face as though women’s soccer and men’s soccer were actually the same sport played at the same level. When the obvious fact is that Abby Wambach would have a great deal of difficulty — a difficulty bordering on impossibility — making the team in any comparable men’s league. Let’s put it in perspective. The Olympic gold medal winner in the women’s 800 meters in the 2012 London Games was the Russian, Mariya Savinova, with a time of 1:56.19. If her time was ranked alongside the times recorded by high school boys in the State of California she would have finished in 88th place and would have been beaten by a couple of dozen high school sophomores and juniors. The women’s world record in the 800m would have been good for 16th place.

Going back to Rigg’s critique, one of the knocks on women’s sports is that sex is used to draw an audience because the quality of the competition is simply not on par with men’s competition. Are women’s beach volleyball uniforms that much more practical than men’s?

Women athletes across the spectrum of sports — golf, surfing, track and field, skiing, soccer, field hockey, softball, swimming, bicycling, diving, stock car racing, even mixed martial arts — are regular features in magazines like Maxim, FHM, Stuff, etc., as well as the Sports Illustrated swimsuit edition, where their sports prowess runs a distant second to their physical appearance and the amount of skin shown.

Probably the exception to this is the WNBA. This sport has largely eschewed heterosexual hotness (there are a very few exceptions, and not altogether successful ones, to this statement) in favor of developing a market that has been described as Tykes (children brought by parents to watch the game lured by low ticket prices) and Dykes (goes without saying). On the whole when most people think of the WNBA, this is mental image conjured up:

He posted a video of a couple of models (the tall one is Melody Rae Kandil, who played college basketball at the University of Tennessee at Martin, the short one a model who goes by the name Tamra Dae) playing basketball on Instagram with this note:

NOW this is what america was hoping for when they announced the #WNBA back in 1996… not a bunch of chicks running around looking like,cast members from #orangeisthenewblack…dont get me wrong,they have few #cutiepies but theres a whole alotta #beanpies running around hahahahahaha if #skylardiggins came out like this,I dont care if she missed every layup..imma buy season tickets and I dont even know where the fuck #tulsa is hahahaha #2016newwnbaoutfitPLS and if u think this is sexist,9 times out of 10 u the ugly one and we didnt pay to come see u play anyway #donkeykong

Who can say that he’s wrong?

When Arenas was attacked for his comment, he ripped a page from Donald Trump’s playbook and doubled down with a post titled Most WNBA Players Are Ugly Lesbians:

…A female telling me shes a #lesbian is like a video chick saying she aint a groupie…I AINT really listening to shit she saying..all im trying to do is convince her and her partner that im a #lesbianstarterkit becuz we all know two females is better then 1 lmaoooooo but that ugly part YEAHHHH they got some #boogawolfs in that league…

Predictably, he’s been called sexist and racist (yes, Arenas is to all appearances a black man). Some aggrieved SJW took to ESPN’s website to write about why Arenas’s comments (comments by a retired ball player on a sport virtually no one watches) matter!!1!!111! Highlights:

Arenas invokes the imagery of the show to exemplify what is not ideal in a woman, while directly comparing them to his ideal, subtly berating all women who do not fit societal expectations as “#beanpies.” And he does this while talking about elite athletes and reducing their athletic achievement merely to his interpretation of what they look like in the mirror.

His comments are an assault on all women, but they particularly target black and lesbian women. The WNBA happens to be composed of women — many of whom are black and some of whom identify as queer.

To make it more interesting, one of the women in the video, Melody Rae Kandil, weighed in on the controversy:

One of the hot basketball playing thong models in the video Gilbert Arenas used to bash the WNBA says Gilbert is NOT entirely wrong … the league needs to sex it up if it hopes to survive.

And get this … the model is a former college basketball player who says she knows firsthand the challenges female athletes have when it comes to getting respect.
…
“I’m all about empowering women …and if wearing sexy attire helps to promote the game in any way I’m all for it.”

Arenas was obviously seeking attention (and got it) but does anyone doubt that utter dearth of femininity in the WNBA has kept it from having the same national appeal as women’s soccer… which has been roundly criticized by the homosexual privileges community for downplaying “out” lesbians as spokespersons in favor of attractive, Mia-Hamm-type women.

And he points to another truth about women’s athletics. The fact is that women don’t compete on the same level as men and that lower skill level results in less television, fewer endorsements, cheaper seat prices, and lower salaries. Relatedly, most sports fans are men. And if men aren’t watching for the top level competition they have to be given another reason to watch. Attractive women can fill the performance gap. The prevalence of women athletes in the various “men’s magazines” shows that the attitude held by Melody Rae Kandil has much more acceptance among women athletes and the public than the view of the offended SJWs. 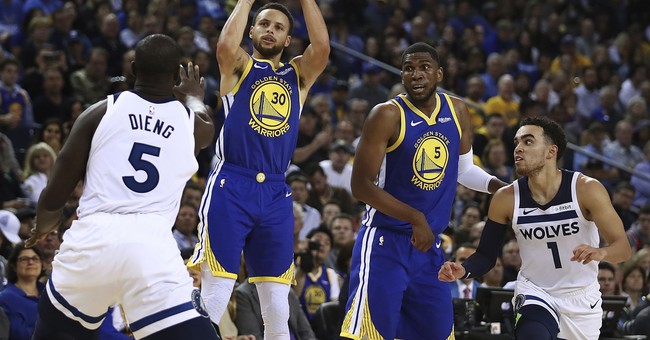