We’ve Learned Some Great Lessons From This Virus, Part I

The Democrat-media complex has been gleefully feeding us virus horror stories that have stampeded the political class into taking drastic actions. While prudent actions are certainly warranted, such as social distancing and extra-special personal hygiene, it remains unclear that this virus has a higher mortality rate than the seasonal flu.

The Left swear by “science” when that science suits them, and they’re great at manufacturing the “correct” numbers through the use of flawed models and polls to drive their cockamamie political agenda. For example, all the climate change models are flawed, yet the Left have been running with the most extreme climate alarmist predictions for over two decades now, but none of their dire forecasts have come true. Think that’s an extreme statement? Then check out this outstanding fact-filled tutorial on climate models that completely destroys the narrative of climate alarmists:

And yet, the likes of self-declared socialist Bernie Sanders and The Squad – especially the Millennial Alexandra Ocasio-Cortez – are hell-bent on turning the US and world economies upside-down in pursuit of their ridiculous “Green New Deal,” and they use flawed climate model predictions and “consensus statements” from the UN to justify their radical plans. How many times have you heard Bernie claim that the real existential threat to the planet is climate change? Never mind, say, the ChiComs and the spread of the Chinese virus, eh, Bernie? To be honest, he’s never met a Commie he didn’t love.

This propensity to use flawed model predictions and polls has been put in play by the Left during this CCP virus pandemic, too. There has been a great deal of publicity given to the estimates stemming from a CCP virus model developed by an infectious disease modeler from Imperial College in London. He has sensationally predicted an upper bound of 500,000 deaths projected for the UK (population: 66 million). How can he possibly produce this number without making some gross (and flawed) assumptions? What is known about the number of people who have been infected but who only suffered “flu-like symptoms” and recovered without the need for hospitalization – or even knowing that they had the CCP virus, to begin with? The number of those people (a completely arbitrary input for his model at this point) would greatly affect any of his model outputs.

Do you think that people like that don’t exist? I can assure you from direct first-hand knowledge that they do. I know an entire family who contracted the virus, and all but one has the virus in remission. They all had identical symptoms in sequence over a period of weeks (first one, then the second, etc., until the last). The only reason the last person still has it is because that individual was the final member to catch the virus and tested positive only because family members suggested taking the test (the symptoms manifested as flu-like without any complications).

Now, obviously that’s anecdotal evidence, but the fact that these folks exist means that there are absolutely more people just like them around the world. But in what numbers? Nobody at this point has a clue. How can that UK modeler – or anyone at the CDC and NIH, for that matter – account for people like them in their predictions of numbers of cases, deaths, and mortality rate when they don’t even know how many people have had the same experience?

And sure enough, there has been some push-back on those predictions, as well as a new low-end prediction made, too, as reported here:

A top infectious disease modeler and epidemiologist said there is misinformation going around about his research on the expected coronavirus death toll in the United Kingdom.

Neil Ferguson, an Imperial College London professor, said his original estimate, which showed the coronavirus would kill 500,000 people in the U.K., remains true, while a new model reading reflecting the influence of lockdown measures saw that estimate shrink to 20,000 or fewer.

His initial March 16 report that showed the disease could cause up to 510,000 deaths in the U.K. also projected up to 2.2 million deaths in the United States from a similar spread. That report, which said social distancing practices might be needed for as many as 18 months to avoid catastrophe, is credited with inspiring more extreme measures to have the public self-isolate to stem the spread of the coronavirus.

Why, yes, it does seem like the original predictions were pretty alarmist, doesn’t it? But the model’s “output” served the Left’s purpose of “inspiring more extreme measures” to combat the virus, including shutting down the US economy, which greatly serves the political objectives of the Democrat-media complex, who have been feverishly trying to “get Trump” for the last four years. This is how they roll.

Oh, and speaking of anecdotal evidence, here is some that the Democrat-media complex buries because it doesn’t fit their narrative:

Dr. Zelenko provides updates on the treatment after he successfully treated 699 COVID-19 patients in New York. In an exclusive interview with former New York Mayor, Rudy Giuliani, Dr. Vladmir Zelenko shares the results of his latest study, which showed that out of his 699 patients treated, zero patients died, zero patients intubated, and four hospitalizations.

Dr. Zelenko said the whole treatment costs only $20 over a period of 5 days with 100% success. He defines success as “Not to die.” Dr. Zelenko first posted his Facebook video message last week calling on President Trump to “advise the country that they should be taking this medication.”

Are those claims by a board-certified family practitioner lies? What purpose would that serve other than potentially leading to decertification if proven to be false? Those are real-world numbers, not the result of modeling, but you would be hard-pressed to find any discussion of that in the legacy media, however. How would the UK model projections work out with an assumption of successful treatment statistics such as that provided by Dr. Zelenko’s methods?

Now the ChiComs claim that their virus cases and deaths have plateaued. Do we believe their stats? How would that UK model apply to a country like Communist China with its 1.4 billion people who live in a culture in which communal meals are taken and close quarters contacts are the rule, not the exception (certainly more person-to-person direct contacts than the Brits!)? The Chinese didn’t even initiate the quarantine in Wuhan until 23 January after MONTHS of spreading the virus not only in their own country but also around the world. Keep in mind that the virus isn’t indigenous to any country other than Communist China. How else, other than through contact with overseas Chinese (or from travelers returning from China), could the disease be transmitted? In any event, there should be tens of thousands more cases and tens of thousands more deaths in Communist China if that UK model has any semblance of accuracy. [Note: for the record, I believe the ChiComs are lying about their stats, but nobody but they will ever know the true numbers.]

What are the lessons we’ve learned so far during this pandemic? There are a lot more than you think. First, the obvious ones:

1. Models are junk. They are used by the Left expressly for political purposes. Public policy should NOT be based on unproven models.

2. The Democrat-media complex are scare-mongers. Crashing the US economy serves their political interests, and the only thing they truly care about is getting rid of President Trump. Take EVERYTHING they incessantly bleat about this pandemic with a YUUUUGE grain of salt, particularly when they demand increasingly authoritarian measures to combat the spread of the virus that involve a suspension of constitutionally-guaranteed liberties.

3. The ChiComs can’t be trusted. They have lied and prevaricated about the virus from the very beginning, and now they were caught out, have used their vast propaganda enterprise (which includes useful idiots in the Western media) to spread their lies that they’ve got the virus licked and are now helping countries around the world. Yeah, by “donating” tests with a high failure rate or charging others for what they imply are donations.

4. The American political class is garbage. We have screwed ourselves royally by allowing a political class to take root in this country, and the latest proof of the pudding is that horrific economic stimulus bill that Nancy Pelosi is still mucking with. No demand-side stimulus bill in American history has ever achieved its intended effects, and this one won’t either. All these people know how to do is throw money at any given problem and hope it works out. What’s worse, this gargantuan porkulus bill contains stuff that has nothing to do with combatting the virus. The only way this will be paid for is through devaluation of the currency (inflation) and placing the burden on future generations.

5. Socialized medicine equals death for some. The wages of socialized medicine – which every Democrat supports! – is rationed healthcare, and as we are learning from Italy and Spain, that equates to life-and-death care choices being made on the basis of availability of respirators and treatment options. The physicians are practicing triage analogous to that performed by battlefield medics – deciding who will live and who will die (the Left does this based on a faulty calculus of “worth to society” as they see it).

6. ChiCom quality control is bogus. The ChiComs have apparently been handing out placebo tests for the virus, as countries around the world have reported high failure rates. Turkey, among other countries, has even rejected the Chinese testing kits, as reported here.

#China's factories sell crap. This time, they have put lives at risk. Now is the time to put these criminals out of business. #coronavirus https://t.co/QmF3vzjnUu

7. Pharmaceutical supply chains need to be reconstituted in the US. We have learned that 90% of the precursors for our pharmaceutical drugs originate in China/oversea. Even some Democrats have come to realize that problem and support the new bill by Sen. Tom Cotton (R-AK) to end dependence on Chinese pharmaceuticals.

The Chinese Communist Party has threatened to cut off America's access to vital drugs in the midst of a pandemic caused by its own failures. It's time to pull America's supply chains for life-saving medicine out of China. https://t.co/XrBorsdynQ

8. Border control matters. The President bought the country time through early implementation of the China travel ban. Unfortunately, Chinese nationals were still able to enter the country illegally across both porous borders. The ability to completely shut down entry into the US, as well as to conduct on-the-spot testing for all people entering the US is a key lesson-learned from this pandemic. The Democrats aren’t squawking much about open borders because the public has awakened to the importance of strictly enforced border security.

The above are fairly obvious lessons-learned from the CCP virus pandemic. Part II will contain a more detailed list that may surprise you. 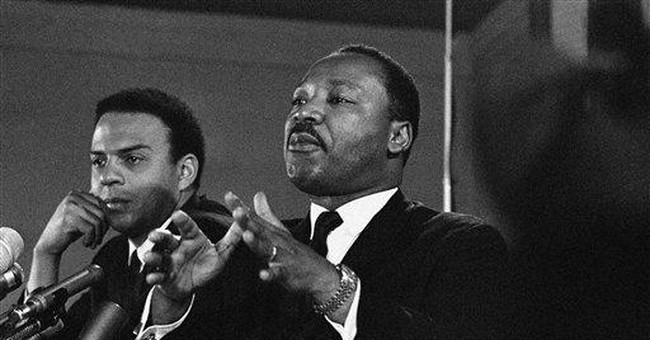 Who's Next on the Cancel Culture Docket -- Martin Luther King Jr.?!

‘It's NOT just about a mask!' Conservative woman takes Lefty talking points about how 'it's just a mask' apart in EPIC thread