Nancy Pelosi: the President Has No Power to Strike Iran at All – Unless Approved by Congress

Headed into the weekend, an Iran strike was at the forefront of the news.

Following the Middle Eastern country’s destruction of a U.S. drone over the Strait of Hormuz Thursday — and amid an already-tense relationship (here and here) — President Trump had noted the U.S. was “cocked and loaded” (here).

The Commander-in-Chief tweeted that he’d stopped a retaliatory strike “10 minutes before,” due to the fact that it would’ve cost 150 lives:

But Friday, Nancy Pelosi emphasized the President has no ability to order a strike at all without congressional approval.

Pelosi said any attack on Iran “must not be initiated” otherwise.

Speaking with reporters after a meeting with White House officials, she made clear she was unaware of any precise military plan:

House Speaker Nancy Pelosi says she "did not receive any heads-up" on any Iran strike https://t.co/08sykXtKte pic.twitter.com/UQ42Gxmsf0

As reported by The Hill, during a Situation Room meeting Thursday, Senate Minority Leader Chuck Schumer told the President he had no power to physically hit back at Iran outside of Congress.

The crisis with Iran is a result of @realDonaldTrump provoking Iran’s extreme hardliners & alienating our allies. I cosponsored @SenatorTomUdall’s amdt to the defense bill that prohibits war with Iran without Congressional approval. We can't start another war in the Middle East.

In addition to her comments to the media, Pelosi released the following statement Friday:

We are in an extremely dangerous and sensitive situation with Iran.  We must calibrate a response that de-escalates and advances American interests, and we must be clear as to what those interests are.

“During our meeting with the President at the White House, Congressional Leaders stressed the necessity that we work with our allies and not strengthen the hand of Iran’s hardliners.

“Democratic Leaders emphasized that hostilities must not be initiated without the approval of Congress.

“We have no illusions about the dangerous conduct of the Iranian regime.  This is a dangerous, high-tension situation that requires a strong, smart and strategic approach.”

So what’s the reality? Here’s The Daily Caller:

Although [1973’s War Powers Act] requires the President to consult with Congress “in every possible instance” before deploying troops into war, it grants the Commander-in-Chief 48 hours before telling Congress that the United State military has been sent “into hostilities or into situations where imminent involvement in hostilities is clearly indicated by the circumstances.”

For an easy view of politics at work, one may compare the three Democrats’ claims to top Dems’ castigation of George W. Bush’s Iraq War — which they continually blamed on him after the fact, even though many of them voted for it. Now they’re saying nothing happens without their approval; back then, they were distancing themselves from a congressionally-declared war like it was going out of style.

For the moment, The Donald intends “major sanctions” against Iran beginning Monday (here). But military aggression is “always on the table until we get this solved. We have a tremendously powerful military force in that area.” 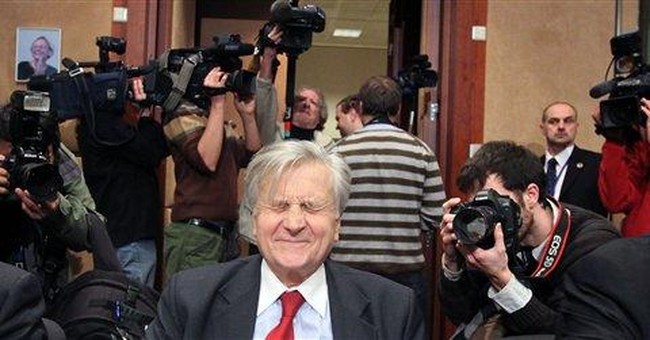