Rudy Giuliani on Fox News: Joe Biden is a Liar, and If They Wanna Indict Him, Bring It On!

On Saturday, Trump lawyer Rudy Giuliani bounced onto Fox News program America’s News HQ to say he has no business interest in Ukraine.

And: He’s not afraid of being indicted.

Speaking to host Ed Henry, the former mayor of New York explained that the “case has been really simple from the day that Joe Biden confessed to committing bribery in 2018.”

“Although, he said precisely what was attributed to President Trump a year and a half later. … Basically, they’ll prove that he committed bribery.”

The way Rudy sees it, “You’d have to be a fool” to think Joe “didn’t know that his son was under investigation.”

However, according to Fox:

The founder of the company Hunter Biden worked for is currently under investigation, but there is no evidence he himself is being investigated.

It’s the same ol’ same ol’: Everyone talks as if it’s the other side that’s being humiliated.

As indicated on Twitter, Rudy ended up taking Joe’s comments as an absolute threat:

“Biden: Lindsey Graham will ‘regret his whole life’! This reminds me of Biden’s decree to the media to silence me on September 29th. Now a threat to a US Senator. This is getting to be more and more like my old mafia cases. They sure do sound like crooks.”

This reminds me of Biden’s decree to the media to silence me on September 29th.

Now a threat to a US Senator. This is getting to be more and more like my old mafia cases. They sure do sound like crooks.

Personally, Joe doesn’t strike me as the threatening type. But I am afraid of him — he rubs me the wron….aw, I can’t even finish it…

On America’s News HQ, Rudy called Joe a “poor imitation of The Godfather” and a habitual liar:

“I don’t care what he said. He’s lying. He’s been lying all his life. Every place that Joe Biden was a point man…the Biden family came away with millions. And nobody wants to look at it because the Washington press corps protects him.”

It’s quite a tangled web.

[G]iuliani’s former associate Lev Parnas — who pleaded not guilty to federal campaign finance violations earlier this month — is now claiming that he traveled to Kiev shortly before the inauguration of Zelensky to demand the new administration publicly announce an investigation into the Bidens.

Parnas’ lawyer confirmed to Fox News that his client told Ukrainian officials that Vice President Mike Pence would not attend the swearing-in of the new president and the United States would freeze aid to the Eastern European nation if the demands were not met.

The claim by Parnas, who has been preparing to testify in the House Intelligence Committee’s impeachment inquiry into President Trump, directly challenged the accounts by Trump and Ukrainian officials that have been at the heart of the congressional probe.

Rudy says the whole thing’s hogwash, and that Parnas is “trying to make himself very important.”

“We never had that meeting with the President.”

Back to the notion of Giuliani having business in Ukraine, he denied a report from the Wall Street Journal claiming he’d personally benefit from a natural gas pipeline in the Eastern European country.

That’s but a grain of sand; he doesn’t have time to stay abreast of it all:

“I can’t keep up from the amount of false information printed about me.”

And as for an indictment, he says bring it on:

[The President] knows what I did was order to defend the President — not to dig up dirt on Biden. This goes back a year ago before Biden [had] even decided to run for president.”

He started with one mission:

“My thought when I began investigating this was to get evidence that will help my client prove that the charges against him aren’t true.”

And he ain’t skeered:

“You think I’m afraid? I did the right thing.”

One thing I’ll say about Rudy: He’s got conviction. He speaks with surety.

And as we continue to make our way through Impeachment Mania, there’s sure to be a lot more for him to speak about.

Oliver Darcy assimilated into CNN hive mind, embarrassed to have worked for The Blaze after seeing Manu Raju tweet 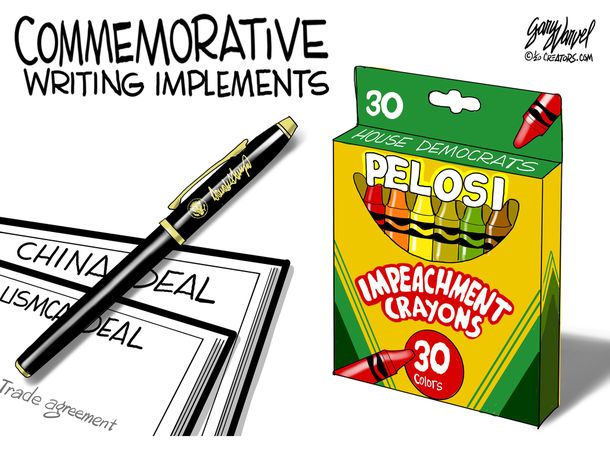