He’s Out – Tom Steyer Leaves the Race, But Hopefully the Billionaire Will Still Be Able to Fight His Fingered Foe: Disproportionate Wealth 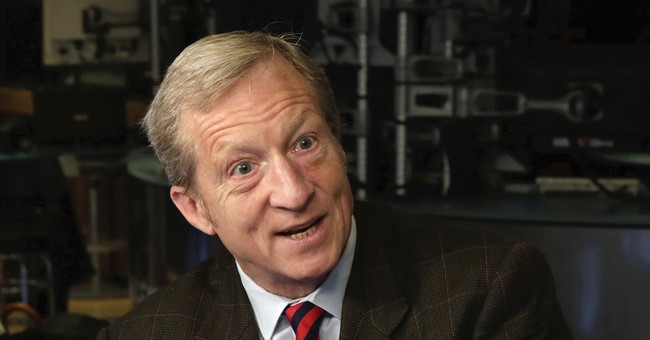 FILE – In this April 2, 2018, file photo, billionaire environmentalist Tom Steyer is interviewed on Cheddar on the floor of the New York Stock Exchange. Michigan’s two dominant utilities committed Friday, May 18, 2018, to increase the power they produce from wind and other renewable sources to 25 percent by 2030 under pressure from Steyer, who ended a ballot drive opposed by the electric providers in response. (AP Photo/Richard Drew, File)

Pour one out for Ton Steyer’s campaign.

And one for my homies.

The billionaire is out of the race for 2020 glory, but I’ll always be grateful to him — and his wife, Kat (she moves like one) — for providing one of the greatest moments in modern political history.

Here’s more of the hedge fund mogul/rapper with music sensation Juvenile and his 1999 hit “Back That Azz Up”:

#DiscoTomSteyer dances his way out of the presidential race. pic.twitter.com/b2juxcb2u7

I watch that, and I ask myself, “Why should anyone ever be president other than him?

Still, one tweeter took it as an omen:

This is Tom’s Howard Dean moment.

Others thought the same:

Heck, pour one out for Howard, too.

Back to Tom, the far-left candidate announced Saturday he was ending his run after falling short in the primaries.

And by the way, he shelled out a few bucks along the way.

Here’s what The New York Times had to say:

The news came after Mr. Steyer, 62, failed to capitalize on his investment of millions of dollars in South Carolina, where he had pinned the hopes of his campaign. Despite spending more than $175 million on adverting throughout his campaign, Mr. Steyer did not earn any national pledged delegates in Iowa, New Hampshire or Nevada, making South Carolina something of a make-or-break state for his continued viability.”

Speaking to supporters in S.C., Jiggity Tom noted a definite letdown over how things went:

“There’s no question today that this campaign, we were disappointed with where we came out, I think we got one or two delegates from congressional districts, which I thank South Carolina for and the people. But I said if I didn’t see a path to winning, that I would suspend my campaign. And honestly, I can’t see a path where I can win the presidency. So am I going to continue to work on every single one of these issues? Yes, of course I am, because I’ve never stopped. That’s what I’m here for.”

And don’t think Tom’s out of the limelight; he’s got some major supporting to do:

“And let me say, I kept trying to say this during the campaign, I’m a huge grass roots person. I of course will be supporting, I’ve said from the beginning, every Democrat is a million times better than Trump. Trump is a disaster and let me this, we’re in South Carolina, Lindsey Graham is a disaster, he’s a disaster for the people here.”

That’s quite the disaster.

Steyer also took a minute to take us to church. Like a Baptist burglar:

“And let me say once last thing. When the Lord closes a door, he opens a window. I will find that window and crawl through it with you, I promise you that.”

Some criticized the New Yorker for dumping all that dough into the crapper of scrapped plans:

Tom Steyer spent a quarter of a billion dollars on his campaign and he might end up without a single delegate.

Just imagine all of the good he could've done with that money instead of burning it on the ultimate ego trip, which ended with America resoundingly rejecting him.

Personally, I disagree — what’s the point of being a billionaire if you can’t run for president just ’cause?

So looking back, why didn’t his sail catch wind?

Well, he certainly set his boat at the far end of the ideological sea.

In September, The Daily Wire described it thusly:

Perhaps more so than any of the 2020 Democratic presidential candidates, Steyer’s candidacy revolves around one core issue: Environmentalism. He has made global warming prevention, opposition to the oil and natural gas industries, and a concomitant greater government role in investing in alternative energy sources the central tenets of his public activist profile. Steyer has a less prolific track record and history of commentary on other issues, but all available evidences points toward his being an across-the-board, full-spectrum progressive/leftist.

As a wealthy person (net worth = $1.6 bil), he also targeted a bizarre enemy: wealth.

He schooled the crowd in the southern state that’s on James Taylor’s mind:

“We live in a country that is deeply unjust economically where rich people have been profiting at the expense of everybody else.”

Here’s some unsolicited advice to all people at the mic: Don’t talk about income disparity if your income is above that of the average American (giving away all your money can quickly remedy this).

But Tom’s not that detached — he’s ready to pour his efforts into something new.

Because, sometimes, when you lunge forward to take the White House…if the primaries don’t go right…

…ya gotta back that azz up.