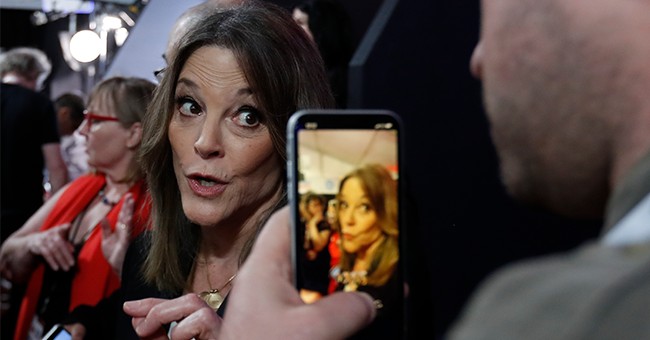 According to Vox Editor-at-Large Ezra Klein, here’s how the tweet laid it out:

In the hierarchy of coups, personally, I’d put all the above way higher on the list than an anti-Bernie Bidengate.

Later in the evening, she expounded upon her claim, asserting that the Dem Powers That Be have no faith in democracy. Hence, Biden’s rise:

Elite Republicans don’t respect democracy; elite Democrats don’t trust democracy. Real power in the hands of the people is a threat that neither of them can abide.

As noted by The Daily Wire, she explained further in an on-air conversation with talk radio host Joe Madison.

Marianne only deleted the tweet, she said, because “coup” is inflammatory.

And she saw the dropouts of Sen. Amy Klobuchar and former Mayor Pete Buttigieg as awful fishy:

“I think that what happened Monday night was very uncool, and I re-wrote a tweet that basically makes the same criticism, it just doesn’t use that word, which sends people climbing up a wall, because God forbid we have radical truth-telling at this point.”

It’s no wonder she’s a believer in Bernie — she ain’t too hot on capitalism:

“American capitalism has become untethered to ethical and moral consideration for people and planet, and our government has become a handmaiden to those forces. It’s a little more than a system of legalized bribery.” pic.twitter.com/0zErK6z07o

Furthermore, Bernie — who champions socialism — is by no means extreme:

Those in both parties who paint Bernie as extreme are doing so in order to protect an economic paradigm that puts corporations before people. THAT is what should be seen as extreme.

Oddly, Williamson and Trump seem to be on somewhat of a similar page. Feast your eyes on what the Commander-in-Chief thought about Tuesday’s results:

The Democrat establishment came together and crushed Bernie Sanders, AGAIN! Even the fact that Elizabeth Warren stayed in the race was devastating to Bernie and allowed Sleepy Joe to unthinkably win Massachusetts. It was a perfect storm, with many good states remaining for Joe!

Or does that matter?

At the end of the day, it seems to me, people are either for socialism or against. At least, that is, if they know what either that word or “capitalism” means.

Marianne seems to think Blue State lever-pullers are somewhat radical, even if Bernie isn’t. And that’s how the Democrats clinch the White House:

There’s certainly a crowd of voters who are Berning with passion.

But was Tuesday night about a coup, or about some seeing socialism as coo-coo?

Either way, I’m not so sure Biden’s playing the middle.

Ladies and gentlemen, I give you a “moderate”:

The media’s nervous breakdown over race