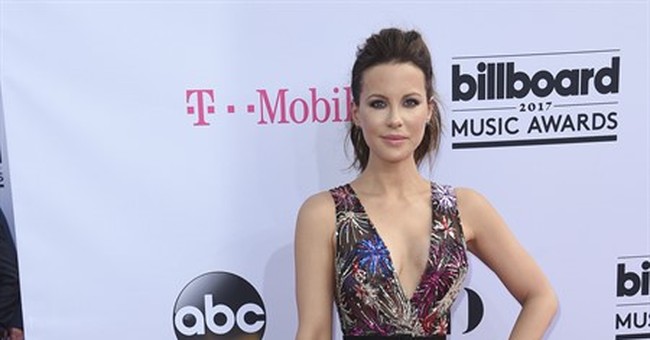 Kate Beckinsale arrives at the Billboard Music Awards at the T-Mobile Arena on Sunday, May 21, 2017, in Las Vegas. (Photo by Richard Shotwell/Invision/AP)

Just a few days ago, actress Kate Beckinsale told the world of an experience with convicted 3rd-degree rapist Harvey Weinstein.

And wow — was it a stunner.

But before we go any further, let me say: Beware of the content below; you may find it very offensive.

On October 5th 2001, a premiere for the film Serendipity was held in New York, near ground zero.

Kate and others initially “refused to go because holding a premiere mere weeks after 9/11 with the city still smoking felt like the most insensitive, tone deaf, disrespectful idea possible.”

“[H]arvey insisted. We flew into New York and somehow got through it.”

On the red carpet, Kate wore a stylish white gentlemen’s suit with a white tie.

Rapist Harvey Weinstein lashed out at Kate Beckinsale for wearing a white suit that made her ‘look like a lesbian’ https://t.co/eF0fQjhqAE

The next morning, she received an invitation from Weinstein for their two young children to play together.

“I turned up, and he immediately called for his nanny to take the babies to another room to play. I went to go with them and he said, ‘No, you wait here.’ The minute the door closed, he started screaming, ‘You stupid f—–g c—, you c—, you ruined my premiere.’ I had no idea what he was talking about and started to shake. He said, ‘If I am throwing a red carpet, you get in a tight dress, you shake your a–, you shake your t–s, you do not go down it looking like a f—–g lesbian, you stupid f—–g c— .’

“The shock made me burst into tears. I tried to say ‘Harvey, the city is on fire. People are still looking for their relatives. None of us even felt the premiere was appropriate, much less coming out dressed like it’s a bachelor party.’ He said, ‘I don’t care — it’s my f—–g premiere, and if I want p—- on the red carpet, that’s what I get.’ Screaming. Livid.”

The Stonehearst Asylum star noted it was “one of many experiences” for which she had no recourse.

“I WAS punished for it, and for other instances where I said no to him for years, insidiously and seeming irreversibly.”

Assuming her account is accurate, such behavior doesn’t take place in a vacuum.

And most human beings aren’t capable of acting that way.

If Harvey did indeed do as Kate describes, that indicates some very deep, foundational things about the man.

And it surely insists there were many, many, many similar events over very many years around many people as a film producer.

So my question is: How was that type of personality allowed to thrive? Why was he given the keys to Hollywood’s kingdom?

I’m not asking how he was able to behave badly at the top; I’m asking how someone capable of that treatment could’ve been enabled to the top in the first place.

Given all of the above, now watch this:

To what conclusions do you arrive?

The New York Times, incidentally, has an opinion — it can be found here (Content Warning).