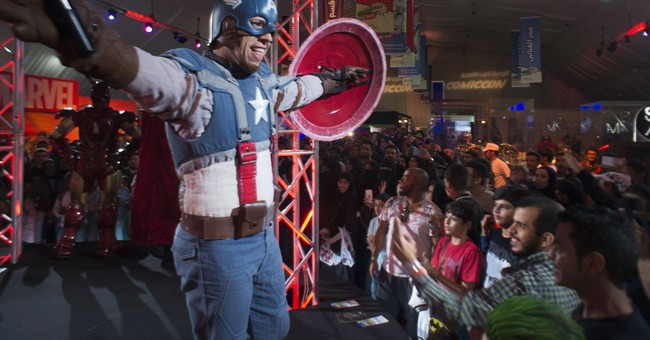 FILE – In this Friday, Feb. 17, 2017, file photo, a man wears a Captain America costume representing a fictional superhero appearing in American comic books published by Marvel Comics, during the Saudi Comic Con (SCC) which is the first event of its kind to be held in Jiddah, Saudi Arabia. This past year, Saudi Arabia laid the groundwork for momentous change next year in the conservative kingdom, defying its own reputation for slow-paced, cautious reforms. (AP Photo, File)

Not everybody’s being a soldier in the army of social isolation.

Some, in fact, are throwing big parties (and getting arrested for it — see here).

But apparently, you can go too far the other way, too.

A resident in Vinalhaven, Maine claims his neighbors decided they didn’t want him to leave home. Therefore, came onto his property, chopped down a tree, and used it to block his road.

And why? They suspected he had the coronavirus.

As per the Portland Press Herald, the guy’s cable wasn’t working Friday afternoon, so he went outside to look around. That’s when he discovered the tree.

Then, according to CNN, this happened:

[A] neighbor started yelling at him and a group of people showed up and began to gather around. Believing the group may be there to harm him, (he) fled to his residence and told his roommates what he had found.

From there, the whole thing went high-tech:

The three roommates stayed in the home, where they used a VHF radio to contact the Coast Guard for assistance and a drone to monitor the group’s activity, the sheriff’s office said. Vinalhaven is an island town.

The crew used a drone to monitor the neighbors ’til cops showed up.

From the Press Herald:

Several law enforcement officers arrived in the area and found the felled tree but no group of people.

Law enforcement noted it was “apparent” that a tree had been cut and dragged across the road to block it — in the words of News Center Maine, “[evidently] to block anyone from leaving the house.”

Let’s get to the purported reason, as stated by the Herald:

Deputies investigated and learned there was a general belief by some island residents that the Cripple Creek residents were supposed to be quarantined because they came here from another state and could have COVID-19.

However, as relayed by CNN, “none of [the roommates] showed symptoms consistent with Covid-19, deputies said.”

Having rented the house as temporary lodging while they worked on a construction project, the outsiders had been on the island for nearly a month — substantially beyond the 14-day incubation period.

But some in the community didn’t want any of them dang foreigners:

After a verbal altercation with a few locals who targeted the roommates because of their New Jersey license plate, “a group of local vigilantes decided to take matters into their own hands,” [state Rep. Genevieve McDonald] said.

On Facebook, Genevieve insisted now’s not the time for an “us vs. them” mentality.

“Targeting people because of their license plates will not serve any of us well.”

She also took time to point out that, essentially, kidnapping is illegal:

“Except for in the most extreme circumstances, we do not have the authority to control the movement of US citizens within our borders.”

The Democrat even threw in a bit of surprising conservatism:

“And frankly, I’m concerned about the number of people who are eager to hand their rights over to the government.”

The Knox County Sheriff’s Office also indicated that anyone who believes an infected person isn’t staying put should call the police.