The comeback of Joe Biden not only looks real at this point, it appears inevitable. Unlike the prior surge by Bernie Sanders, Biden will now be coddled, protected, and propelled into the rest of the primary season. There will be no coordinated endorsements, party machinations, nor softball media coverage to rescue Sanders from his rough night. I won’t speak definitively, but it looks like Biden has seized the race, and with his win in TX, I don’t see the path forward for the once front running communist.

With that said, this isn’t a time for celebration and I was bothered by the amount of jubilation from some on the right last night. It’s getting to the point where it feels like gaslighting. Proclamations that Biden is a “moderate” or that we just avoided disaster because the country won’t be able to soundly reject socialism in November were abundant. The truth is, while Sanders being booted to the side has many positives, we are still headed for a crucial election in 2020.

Further, it bothers me that it only took a week for some on the right to decide to defect again. Just a week ago many Trump-skeptical conservatives were calling for unity among Republicans and demanding we all join forces to stop Sanders. That was a fair request, but you know what else is a fair request? That they don’t fall back into abstaining and complacency the moment their political priorities are met. Yet, that’s exactly what looks to be happening. What’s the point of having allies who only want to ally when they get exactly what they want?

Joe Biden is not a “moderate,” and nothing about him is going to change just because he’s retaken the lead in the Democratic primary. The mental decline? It’s still happening and it will only get worse. Here’s Biden just a day ago.

This is really sad. Joe’s family needs to tell him to pull out of the race. He’s clearly suffering from dementia (although I’m not a doctor but have witnessed this terrible disease). It’d be horrible to watch a loved one do this in the public eye. pic.twitter.com/HaYoPHHZYz

Video: HERE is Biden confusing his wife for his SISTER #SuperTuesday pic.twitter.com/RYzUBkuAtd

If you oppose Trump because you feel like he’s not up to the job, there’s absolutely no excuse for getting excited about Biden and feeling like we’ve saved the country because he’s the other choice now. This is a man who can barely remember where he’s at on any given day, and that’s not an exaggeration. He slurs his words constantly (no, it’s not a “stutter”) and mixes up issues, not from ignorance, but from an ability to process what he’s trying to say. And while people will say “but Trump!” in response, anyone with eyes can see the difference. Trump is a fast talking word salad at times, but there’s a difference between not being a good orator (or just being plain unknowledgeable about a subject as Trump sometimes is) and confusing your sister and wife or forgetting what day it is, both things Biden did in the last day. The physical decline is real and it’s being presented to us in flashing lights.

But forget Biden’s appearances of having the early stages of dementia. Let’s talk policy as well. Yes, the former Vice President manages to be less liberal than Bernie Sanders on healthcare, though he still wants a limitless public option, something conservatives used to assure everyone was a clear and present danger. Yet, on just about every other policy, Biden manages to mirror Sanders or even surpass him to his left.

Just wait until voters really get a close look at Biden, the myth that he is a "moderate/centrist Democrat" will evaporate instantly

Biden just promised Beto O’Rourke, perhaps the most extreme figure possible, that he would lead his possible administration on gun confiscation. Biden has lauded the Green New Deal. He’s promised healthcare to illegal immigrants. He’s worse on foreign policy than Sanders’ isolationism would be. He’s for abortion until birth and hasn’t once spoken against new laws passed in New York and proposed in Virginia. He’s said that if you benefited from the Trump tax cuts (i.e. 80% of Americans), he will raise your taxes. He’s even pledged to jail CEOs over climate change, something so extreme that not even Sanders will commit to it.

On a more personal level, while conservatives are virtue signaling about mean tweets, 500,000 people are dead in Syria (of which I have ample family living in) because of the administration Biden was a part of and claims to have helped lead. This isn’t a game. It’s not just beltway politics. It’s real people and real outcomes.

Yet, some conservatives are celebrating that Biden is probably the nominee? To be frank, that’s not conservative and is concerning.

What this reinforces, much to my dismay, is that there are still way too many of my colleagues on the right who view rhetoric and personality as more important than actual policy. At the end of the day, the middle class family in Wisconsin or Florida is going to be impacted much more by Biden’s policies than any supposed “return to normalcy.” Conservatives should recognize that and be fighting to ensure that Democrats don’t flip the Supreme Court or shackle the economy.

Lastly, I’m not even sure we “won” last night if the goal was to defeat socialism. We had a chance to soundly beat a Sanders nomination in November, stifling his movement and getting the entire country on record against his dangerous ideology. Instead, we’ve avoided the public fight while increasing the chance that his same policies will still be more stealthily enacted under a President Biden, who no doubt stands a better chance of winning the general election. Meanwhile, the next generation of “Democrat Socialists” and hardcore liberals will simply be emboldened and in a stronger position come 2024.

Look, I get that seeing Sanders crater is satisfying and that it seems preferable in the short run. At the same time, I’m worried that way too many conservatives are putting a happy face on Biden and won’t be able to pull that back once he’s the nominee. Biden is far to the left of Hillary Clinton in 2016 and we should be honest about that, not painting him as a harmless moderate because we also rightly fear a Sanders presidency.

I’m disappointed, not because Sanders has face planted, but because it looks like many of the people I view as conservative thought leaders continue to hold a very shallow view of the 2020 race. Biden’s threat to the judiciary, economy, foreign policy, and rule of law is real, and while he packages it better rhetorically, he presents a danger just as pervasive as Sanders. If we can’t even agree on something as obvious as that (Biden is not hiding his policy positions) what exactly is the point of the conservative movement? Because if its priority is just to protect D.C. norms, that’s not a movement that’s worth anything. 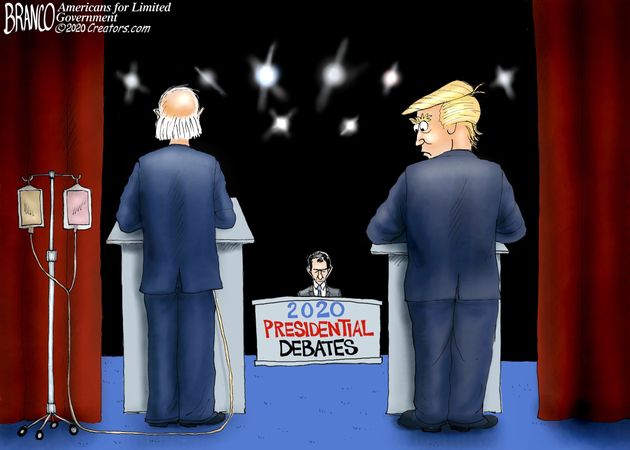