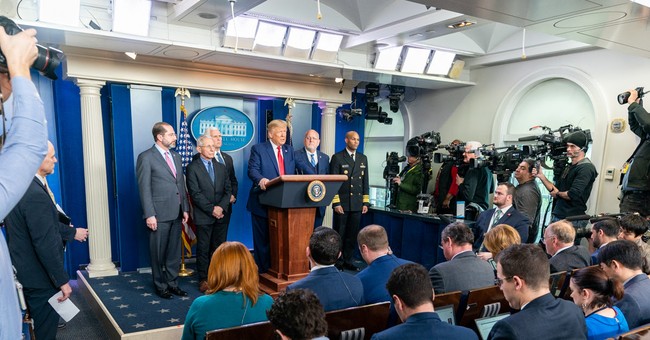 I guess we are going to just keep doing this?

We are now on day three of outrage from the mainstream media over Donald Trump deciding to call the Wuhan coronavirus a Chinese virus. The facts are certainly not in doubt on that point, as the virus spread is a direct result of the communists surprising information and refusing to take action. You’d think combating Chinese propaganda would be something even the liberal media could agree on given the circumstances, but nah.

Becket Adams over at Washington Examiner points out how ridiculous things got at today’s presser, where the President was asked four times about the language around the Wuhan flu instead of important public safety information.

On Wednesday, President Trump and members of his crisis response team were questioned four times during a press briefing on the White House’s plans to combat the COVID-19 pandemic, which originated in China, about whether it is racist to call the disease the “Chinese virus.”

ABC News’s Celia Vega was the first to bring up the matter of problematic terminology.

“Why do you keep calling this the ‘Chinese virus’?” the White House correspondent asked. “There are reports of dozens of incidents of bias against Chinese Americans in this country. Your own aide, Secretary Azar, says he does not use this term. He says, ‘Ethnicity does not cause the virus.’ Why do you keep using this?”

This is an intellectually vapid question and I suspect the reporter in question knows better. No one has claimed that ethnicity causes the virus. When labeling the disease “Chinese,” the indication is that it’s the fault of the Chinese government, not someone’s race. To suggest otherwise is incredibly obtuse and dishonest.

But Vega wasn’t the only one to keep bringing this up, even as real information that could help people fell to the wayside.

Later, a second journalist asked Trump about whether it is racist to call the deadly virus for its country of origin.

“At least one White House official who used the term ‘Kung flu,’ referring to the fact that this virus started in China,” PBS’s Yamiche Alcindor said in reference to CBS News’s Weijia Jiangan, who alleges that a member of the Trump administration used that term in her presence.

“Is that acceptable?” Alcindor continued. “Is it wrong? Are you worried that that having this virus be talked about as a ‘Chinese virus,’ that that might help – ”

Trump had a little fun with that one, asking the reporter to repeat the term “Kung-flu” twice. He pushed back by noting that no one can tell us who this mysterious “official” is who supposedly made the joke.

Adams ends with this succinct summary of the idiocy abounding within the White House briefing room these days.

America is in the grip of a viral pandemic that originated in China. The virus is in more than 120 countries and has killed more than 8,000 people precisely because of China’s incompetence and malicious arrogance. And two White House correspondents used their access to the leader of the free world Wednesday to waste his and everyone else’s time with inane, vapid, useless questions based on Chinese communist propaganda.

The pearl-clutching over calling these media members the “enemy of the people” seems quaint now. We’ve got a full-scale rush within the news sector to push Chinese propaganda and they all seem to be perfectly fine with it. Just today, China released a propaganda piece claiming that Trump was a racist. It might as well have been published in The Washington Post.

Trump has truly broken these people. Nothing is sacred anymore, not even the health and well being of the American citizenry. The media are more than happy to spread communist drivel if it means slapping at the orange man. It’s a sad scene.