The obliviousness of activists turning into what they oppose is delicious to behold.

When it comes to the left-wing activists there is a remarkable attribute that seems inevitable. Frequently the focus of outrage becomes something they lapse into becoming themselves. As a protest wells up once it goes on long enough the protesters inevitably become the very thing they oppose.

Campus protests favoring the 1st Amendment end up shutting down speakers’ right to expression. Environmentalists vying to protect an ecosystem end up polluting the very area themselves. Earth Day marches leave behind a swath of garbage by nightfall. Hilariously a group protesting the border wall ended up erecting its own wall to keep out the authorities whom they opposed.

Next up, the feminists who fear that we are entering an era in which females will be subjugated have promptly stepped in and declared that women cannot do something. It would all be sad and miserable, if it was not so utterly hilarious and shark-jumpingly revealing.

For too long now we have been subjected to the endless protests of women dressing up in the outfit displayed in the HULU dystopian drama series “The Handmaid’s Tale”. The shorthand messaging here is that this somehow represents the goals and policies of conservative politicians. The problem; only leftists watch the show and see anything beyond the dramatic presentation. They are the ones who see actual legislative desires, while most others simply move on.

For a group that thinks it to be a nightmare that women be forced into wearing these outfits they are they ones who willingly and frequently tug on this apparel. The Bonnet & Robe babes are frequent visitors to marches, outside Mike Pence speeches, and most recently at the Brett Kavanaugh hearings. Even celebrities like Alyssa Milano have donned the frocks in the name of self-promotion solidarity. Now things have arrived at the paradoxical conclusion.

The costume/foundation garment conglomerate Yandi had tapped into this political cos-play zeitgeist and this year had issued for Halloween the “Brave Red Maiden Costume”. (Guessing the pumps by Ofchristian Loubitin are extra.)

Key word there is, “had”. It was a rather reserved ensemble, with a high-cut thigh so women can display their comely get-away-sticks while feigning oppression. But alas, the cultural offering has been squelched — by, you guessed it, the usual outrage mobs.

After pics of the costume became a widely-shared internet feature yesterday the expected insufferable feminists could not suffer seeing their pet protest becoming debased alongside all the other “sexy” vocational uniforms. They rose up in opposition and — yes — their digital hectoring was enough to provoke that now-tired result, the corporate apology.

Yandi has come forward to declare that the company will be pulling the costume from its offered lineup.

The contradictions and hilarity abound. Least of which, in bowing to the feminist scolds Yandi has paid heed to a non-existent customer base. It is severely doubtful too many feminists are likely to have purchased their racy costumes, nor their sexually degrading (their term, not mine) lingerie line.

But let us focus in on the rampant contradiction from these supposed protectors of the feminist ideal. The whole concept they oppose, as depicted in “The Handmaid’s Tale”, is the subjugation of women who are not allowed to express themselves. This repression is manifest in that society dictates that they only are allowed to wear permitted outfits.

Now look at what the feminists have wrought: They want to prevent women from expressing themselves (voluntarily, mind you) by restricting what it is they are allowed to wear. It is so deeply and wonderfully ironic that I believe I have been completely cured of my anemia!

And you just know the feminists have completely missed the idiocy of it all. 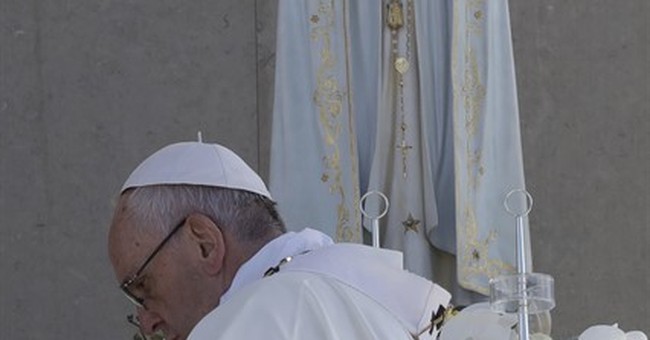 The Economic Philosophy Of The Virgin Mary