The RedState Box Office Report – Pocketing Some of Avengers Money

Considering the massive worldwide success that Disney’s super heroes are currently enjoying there are a number of studios struggling to get a footing. The Mother’s Day weekend can be a success for targeted titles, but in the vacuum created by the monolith in theaters it would take a lot to draw attention away from the Marvel tag-team.

Enter the Pokemon. Warner Brothers was careful in picking the best opportunity to roll out this newest iteration in the expansive character lineup. As a result there was enough space from the early throngs to carve out an impressive segment and actually dare to challenge the titan for the top position. Here are the numbers for you to entertain Mom with later today!

1. AVENGERS: ENDGAME – $63.05 Million
Only now starting to show some softness, but not in unexpected fashion. This weekend haul is a bit lower than expected, but that was largely due to a surprising piece of competition. There are still massive landmarks being achieved, starting with this one now sitting as the third highest grossing film of all time. After setting speed records for various gross levels, today it ties “The Force Awakens” in hitting the $700 million plateau in 16 days. It has also become the all-time second highest foreign box office film, and second highest global box office champ. Currently it has drawn $2.5 billion worldwide, and the only mystery is whether it has the chance to overtake “Avatar” as the biggest film of all time.

2. DETECTIVE PIKACHU – $58m
While expected to have an impact things only improved. There were a number of factors feeding into this becoming a hit; unlike prior versions this was a live-action presentation, it was coming off of the global sensation of the Pokemon Go mobile app, and it has Ryan Reynolds lending his voice to the titular character. This all combined for a stronger interest than predicted, and had a direct impact on the “Endgame” numbers in North America. A $50 million return was mostly expected but as the weekend wore on the film never faulted and showed resilience and did not drop in interest. The global weekend haul is near the $150 million mark, justifying Warners investing in this new version, as opposed to the cheaper animated releases they have had over the years.

3. THE HUSTLE – $13.35m
The female comedy starring Rebel Wilson and Anne Hathaway is drawing slightly better than anticipated, if not lighting up the turnstiles. This is a female retelling of “Dirty Rotten Scoundrels”, itself a remake of a foreign comedy hit. The play was for the Mother’s Day audience and it is showing signs of weakness in the coming weeks. Exit scores from audiences graded this with a “B-”, and it sports a dismal 16% on Rotten Tomatoes. Rebel Wilson cannot even pass off blame on the weak production, as she served as a producer on this attempt.

4. THE INTRUDER – $6.6m
Coming off of a soft opening last week this domestic thriller has held up remarkably well in a very busy market. The great news for the studio Screen Gems is that it was made very inexpensively and it mostly needs to make back its advertising spend. It may become a gamble that pays off.

5. LONG SHOT – $6.12m
The high concept comedy has not been entirely overlooked, and may benefit from families dividing time in theaters — pass the kids off on the comic-animated options while the parents seek out slightly more mature options.

6. POMS – $5.11m
Another comedy debut, this one aimed at the older segment of the audiences, starring Diane Keaton in a romp about starting a cheerleading squad in a retirement community. It had some slightly better numbers (“B+” exit scores, 30% Rotten Tomatoes) but it was crowded out in a Mother’s Day frame heavy with female-centered titles.

7. UGLYDOLLS – $3.92m
A complete misfire that is being roundly ignored by audiences. Considering what else is in theaters iIt is amazing that it has drawn even this meager total.

8. BREAKTHROUGH – $2.46m
The faith-based true-life story has lingered well, exceeding any expectations as it is inching its way to the $40 million mark.

9. TOLKIEN – $2.15m
Fox Searchlight decided to go with a wider-than-planned release for this biopic about the life of the writer of the “Lord of the Rings” book series. This has to be seen as a serious collapse, since it was projected to do only a weak total in the single-digits, and it failed to achieve even that modest goal, while on 1,500 screens.

10. CAPTAIN MARVEL – $1.81m
We are about to be spared more lectures from Brie Larson… 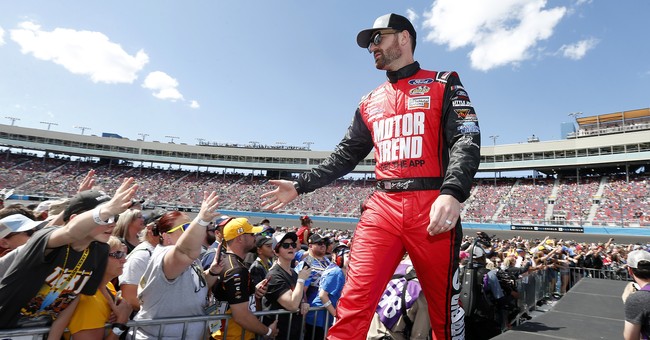 NASCAR Driver Corey LaJoie to Take 'Trump 2020' to the Racetrack