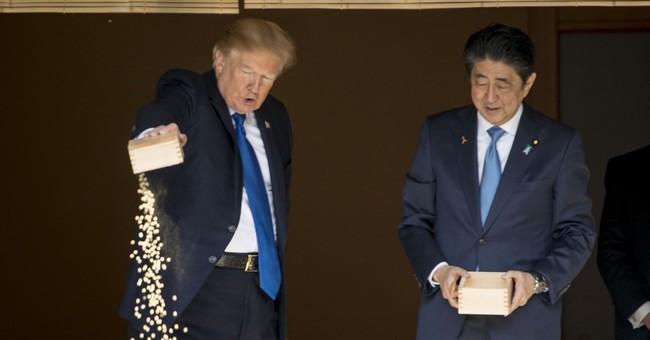 Supposed journalists eagerly blame Trump for a story that contains the exonerating details.

The nation’s press corps has been in a remarkably dim state of mind the past weeks during this viral outbreak. The eagerness to cast President Trump and the administration in the worst possible light, often to the detriment of public notification, has been a blatant reality. Last night the media crossed over another line of propriety in dealing with the President.

A news story came out that a couple had become poisoned when they took a medication at the behest of President Trump. Because of his touting of a possible drug, we are told, that could serve as a cure for the COVID-19 flu strain, they became ill, with the husband passing away and his wife admitted to the ICU. This was all positioned as a tragic result of the President’s irresponsible directives from his White House press briefings.

To understand the way our media complex has completely tossed logic and introspection out the window in their zeal to scorch Trump for any perceived insurrection here is the foundation of last night’s hysteria. President Trump had mentioned days ago the hydroxychloroquine is being looked at as a possible remedy for the Coronavirus. Then, last evening this story broke, from NBC News.

Arizona man dies after ingesting chloroquine in an attempt to prevent coronavirus. https://t.co/BG4xyZnKFv

There are no drugs approved to try to prevent or treat the new coronavirus. Self-medicating to prevent the coronavirus can be dangerous and possibly deadly.

Immediately, the press and the activist branch of the leftists leaped to action, loudly declaring that this death was at the hands of the President, who was directing people to take this unproven and deadly medication! Not just journalists repeating the news but famous hysterics such as George Conway and Laurence Tribe were essentially accusing Donald Trump of something approaching manslaughter.

The amazing thing? It takes the barest investigation into this story to learn the details behind what happened with this couple. In doing so, the press and its hysterical obsession with shrieking any negative details about Trump become completely exposed. The best display of this comes from NBC’s Heidi Przybyla. She followed up her network’s breaking report on this story with a thread that explains it all…eventually.

👉Her husband is dead & she's in the ICU after ingesting chloroquine:

"We saw Trump on TV — every channel — & all of his buddies and that this was safe," she said.
"Trump kept saying it was basically pretty much a cure."

The wife was interviewed at her bedside and delivered the dire message that President Trump directed her and her husband to poison themselves. Except, as Heidi lays out in her thread, this was not the result of being given improper medical advice from the President of the United States — it was the result of ignorance.

To start, the couple did not take the medication hydroxychloroquine. To quote the woman — ‘’I was in the pantry stacking dog food and I just saw it sitting in the back shelf and thought, ‘Hey, isn’t that the stuff they’re talking about on TV?’ And it was.” Well, actually…it was not. What she found was a household derivative, chloroquine, which was merely an ingredient in another product never intended for human consumption. Eight tweets into her thread, Przybyla, after multiple tweets laying the blame on the President, finally gets to the details of the matter.

“The toxic ingredient they consumed was not the medication form of chloroquine, used to treat malaria in humans. Instead, it was an ingredient listed on a parasite treatment for fish.”

Seriously. This couple took a treatment for fish parasites, poisoned themselves in the process, and they want to blame this on the President. Let us make something of a flow chart to explain.

That anyone in the press even thought of giving voice to the claim that the President was somehow responsible for this wildly idiotic behavior by supposedly mature adults defies common sense. What this couple endured is tragic to be sure, but to suggest that they were compelled to poison themselves based on the words of Donald Trump is a complete act of sophistry. More likely is the couple were driven to an emotional panic based on the hysterical reports from our news complex, but I will not even go to that level.

Personal accountability has to be applied here. Why anyone would discover a product that they had previously purchased as a treatment for a koi fish pond and think it was perfectly fine to ingest, without so much as consulting a physician, is a mystery. That is something only they can answer for, but to blame anyone else for these actions is ridiculous — and for the media to blame the President for their actions is the apex of irresponsible journalism. This, however, is the climate we are currently situated within.