In this photo taken June 6, 2015, Andii Viveros, 21, of Davie, Fla., applies makeup as she prepares to host the annual Sun Serve LGBTQA Colors of the Wind youth prom in Fort Lauderdale, Fla. Viveros, who identifies as a transgender female, said she was always different from an early age growing up as a boy. Her parents accepted her to be anyway she wanted to be. She fought for her rights in high school, sometimes violating the school’s code of conduct by wearing dresses. She was elected prom queen in high school and is now studying sociology in college. (AP Photo/Lynne Sladky)

There I was, minding my own business, when I got hit with this atrocity.

The Category Is: Fashion Gumby Butterfly Realness. 🦋 Today’s @criticschoice custom @hoganmclaughlin look styled by @sammyratelle is inspired by the free-spiritedness of David Bowie and the 1970’s disco era – my all-time favorite. The hand-painted butterfly tattoos by @heyannabee continue my theme for 2020, which is being released from the bondage of masculinity and flying free. Just like the beautiful ladies from @poseonfx, we are often born into one stage of life and then cocoon into an incubation of self-discovery, transformation, and acceptance, ultimately being released into freedom as beautiful creatures. Style by @sammyratelle Grooming and Tattoos by @heyannabee Nails by @nailzbyvee for @cndworld Styling Assistants @ashleydai1, @alexandra.bucokova Wearing custom @hoganmclaughlin of @peoplesrevteam Jewels by @lynn_ban Custom boots by @coach 📸 by @gettyentertainment

This is actor Billy Porter, and he likes to put on dresses and do feminine things to which I say, “whatever floats your boat, dude.” Any normal day, I would have left it there but the problem this is that any time Porter puts on a dress, the media immediately launches into action and begins hitting me and everyone else with the same tired topic of “the definition of masculinity.”

I then have to watch fawning reporters, social justice keyboard warriors, and coastals of every shape and size begin telling me that masculinity is fluid and that we need to redefine it.

First off, no we don’t. We don’t have to redefine masculinity as masculinity was well-defined by natural law long before the social justice movement ever arrived on the scene and began trying to rewrite the natural order of things. If I’ve said it once, I’ve said it a thousand times. A decade of men putting on wigs and dresses and trying to redefine “gender” isn’t going to reverse millions of years of nature.

The underlying issue, however, is the fact that the media continues to push this idea of redefining masculinity because, in my opinion, they have forgotten what it masculinity is. Not just the media, either. Our entire society seems to have forgotten.

I can’t fully blame society, however.

For eons, the strengths and weaknesses of our genders were clearly defined. Labor was more physically demanding and it took long hours and backbreaking work to put food on the table. Child care wasn’t exactly a big thing and the nearest doctor may have been a multi-mile horse ride away, so the mother would stay at home with the children and tend to the needs of the home.

Don’t misread me here. This wasn’t masculinity, it was just a very outward show of it. The man risks life and limb in order to bring home the necessary resources to keep his mate and offspring fed and healthy. The underlying theme here is that masculinity selflessly sacrifices itself for the benefit of others, and does so because its strength and resolve allow it to.

However, as society advanced technologically, the role of the sexes began to blur. The way to put food on the table became less of a blue collar affair and more of a white collar one. Women could easily perform in that environment. Long gone are the days of needing to hunt and gather to get your food as a few presses on your handheld computer device can make food show up at your door within minutes. We’re no longer in any real danger from wild animals and any work that needs to be done on the home can be done with a simple call to your local expert.

Moreover, the definition of masculinity became blurred in society’s eye thanks to various social movements that began to put masculinity into the column of societal antagonist. Never mind that it’s a natural aspect of men that makes up one side of the human coin, and compliments femininity naturally, making a more wholesome household and stable environment for children. According to the activist groups, masculinity is responsible for every horrible thing under the sun, be it rape, sexual harassment, keeping women down, and even capitalism.

So good was the sell on that idea that we’ve had multiple waves of feminism sweep through the western world, each one of them more hostile and asinine than the last, but each one attaining a form of mainstream platform.

Masculinity has faded into the background so much that we have forgotten what it is. Combine that with the fact that the mainstream media is only too willing to forget what masculinity is and you have Billy Porter being touted as some kind of breakthrough thought leader for putting on frills and telling us that masculinity isn’t masculinity.

It’s not just malicious. It truly is looking for a definition in its confusion about what it is.

Men have been told that being a man is bad for years now, both in the mainstream media and in the schools from childhood. A new definition is needed to alleviate the pressure and the answer they’ve come up with is “be more feminine.”

The thing is, while men are definitely the primary targets here, women should be furious at this as well. Not only is masculinity a necessary thing for society to function properly, it’s forcing a new definition on femininity as well.

You ladies don’t have to look far to see the effects of that. How many awards have men won that were meant for women, be in sports or accomplishments? How many bathrooms are now not female only spaces because they’ve allowed men to walk in without question if they say they identify as what you actually are?

It’s just as much an attack on women as it is men.

Men need to be able to be men without having their natures held against them. It’s a personal attack as much as it is a societal one, and no one should be surprised that we have a skyrocketing suicide rate among men.

What Billy Porter and the media are doing is far more destructive than they likely understand, or worse, care about.

When Getting Attention Is the Only Goal 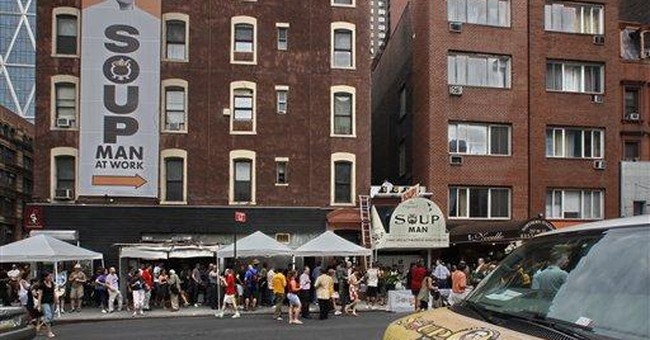 Regulators and Bureaucrats Vs The Soup Nazi

BREAKING: The FBI arrested the guy responsible for keeping poop off of San Francisco's streets