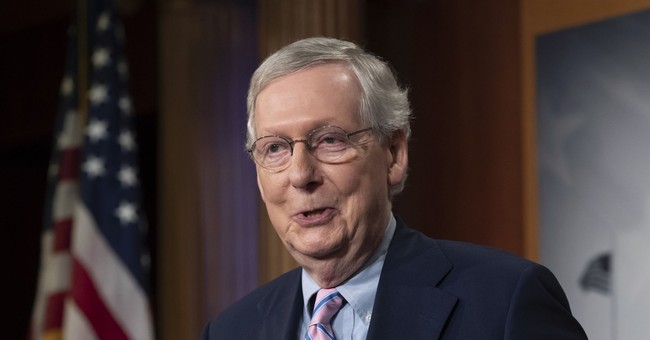 Majority Leader Mitch McConnell has decided to turn his Kentucky reelection campaign into a helpful group of volunteers instead of a full-on political campaign in order to help those in need.

Rest assured, it’s still a campaign, but instead of making it about voter outreach, McCconnell is putting his volunteers to work helping the elderly get groceries and Chick-fil-A meals so that they don’t have to risk contracting the Wuhan virus.

According to the Daily Caller, statements from the campaign show that they aren’t shy about showing up the competition with good works instead of nasty words:

“As Senator McConnell leads bipartisan efforts to help Kentuckians and all Americans cope with the impact of the coronavirus, Amy McGrath continues to run millions of dollars in false, negative political advertising designed to tear us apart. A candidate whose partisanship and ideology is so extreme that she cannot understand what people need in times of crisis is one that should not represent her political party, let alone the Commonwealth of Kentucky,” McConnell Senate Committee campaign manager Kevin Golden said in a statement.

“Team Mitch has suspended its voter contact program and is asking Kentuckians if we can be a resource to provide meals for those who are at-risk and cannot get a meal on their own during this difficult time,” Golden continued.

“We paused our entire voter contact program and turned it into an outreach effort for at-risk Kentuckians. Phone bank volunteers are now standing by as operators for folks who need help. Staff and volunteers who, under normal circumstances, would be fanning out across the state to canvass and distribute campaign literature have been now tasked with assisting the needy during this difficult time,” a McConnell campaign official told the Daily Caller.

This comes as his Democratic opponent, Amy McGrath, has reportedly been running million-dollar attack ads as the pandemic is ongoing. The move puts McConnell is a position of doing good instead of just talking about it while his opponent bad mouths him.

If this were a chess game, McConnell just took out McGrath’s queen and fed some needy people while he’s at it.

Cocaine Mitch has his campaign focused on getting Chick-fil-A and groceries to senior citizens.