Opinion: We Have Excess Capacity, No Need to Panic 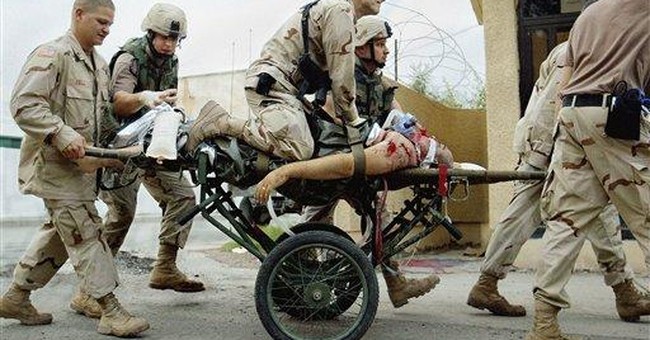 FILE – In this April 4, 2005 file photo, Combat Support Hospital Army Nurse supervisor Patrick McAndrew tries to save the life of an American soldier by giving him CPR upon arrival at the Combat Support Hospital in Baghdad, Iraq. In the beginning, it all looked simple: topple Saddam Hussein, destroy his purported weapons of mass destruction and lay the foundation for a pro-Western government in the heart of the Arab world. Nearly 4,500 American and more than 100,000 Iraqi lives later, the objective now is simply to get out _ and leave behind a country where democracy has at least a chance, where Iran does not dominate and where conditions may not be good but “good enough.” (AP Photo/John Moore, File)

Yesterday, I wrote that we shouldn’t be quite as concerned as the folks in Italy about overwhelming our hospital capacity, as we have lots of untapped assets to call upon. I cited two stand-out military assets, the USNS Comfort and USNS Mercy, two naval vessels with 1,000-bed capacity each. I also mentioned the Combat Support Hospitals (CaSHs) in the Army Reserve and National Guard. At President Trump’s press conference yesterday, the Department of Defense representative made specific mention of those assets in his comments regarding the U.S. military’s readiness to support civilian authorities if ordered by the Commander in Chief. Obviously, great minds think like mine!

As I listened to him, I thought about Dr. Parker’s remarks on Tuesday and I recalled him also mentioning the possibility of using cruise ships now idled, as possible hospital sites. That got me thinking about other ways to shake loose more capabilities without unduly disturbing the medical infrastructure, processes, and people we now have in place

In addition to the Mercy, the Comfort, and Army field hospitals, we could also contract with cruise lines and hotels, both of which are already set up for the toughest part of patient support, care and feeding…the “hotel” part of patient care. Put the appropriate medical staff on board and we’ve got additional hospital capacity where none existed before.

“Not so fast Ford!” the shouts are heard from the audience. “Where do you think you will get the bodies to man those facilities?” Mobilizing National Guard and Reserve troops from their day jobs, which are likely in the medical field, would just be robbing Peter to pay Paul.

I thought that might be a legitimate beef, so I looked into it with the help of some of my Army buddies. Being as I am not a doctor and haven’t played one on TV, I consulted with some folks in the medical field. Here is what one of them with a background in running a field hospital said

Any MD/DO current in just about any speciality can be used to treat the infectious disease issues of COVID-19 and the respiratory system complications involving it. The orders involved are primarily going to be a “stock set” based on protocols developed nationally/locally and tweaked for the individual patients based on inputs coming from the nursing and respiratory care staff. The shortages will be at the respiratory care staff and nursing end of the equation, NOT the doctor end.

That means, doctors will not be the long pole in the tent, as just about any medical specialty can, in a pinch (and with POTUS directed emergency legal waivers), be the medical supervision over patient treatment. The rest of the trained staff, nurses and respiratory care staff are a tougher proposition.

Here’s where we can get innovative. These supporting staff members do some truly critical tasks that require special skills and training. They also perform a whole bunch of other tasks that could be performed by folks with somewhat less training, if properly supervised. Taking Patient Smith’s vital signs 3 times a day, making sure he is taking 2 green pills, a yellow pill and consuming at least a liter of water per day, could take a significant load off of regular staff, freeing them up to do higher-skilled tasks on more patients.

That’s where standard Military Medics (Navy Corpsmen) and possibly even regular Soldiers/Sailors/Marines/Airmen with Combat Lifesaver training could shoulder some of the load. There are a whole lot of patient care tasks they can perform, thus freeing up doctors and nurses for the critical ones. Mobilizing this category of Reserve and Guard personnel could prevent taking some trained medical folks out of their communities when they are needed most.

This is only one example of how we can use alternative resources to get to the place we need to be. I am sure there are many others out there who, with a little thought and some innovation, could help backstop our primary medical system should the need arise. I am also sure that given the multi-faceted talents of the Red State readership, there is a bevy of other suggestions that would help bridge the gap. I’d be very interested to hear them in the comments. I also realize that there are likely some technical issues with the specific proposals above, but I’ve found that in time such as these, the attitude we need to have is: Solve for YES!