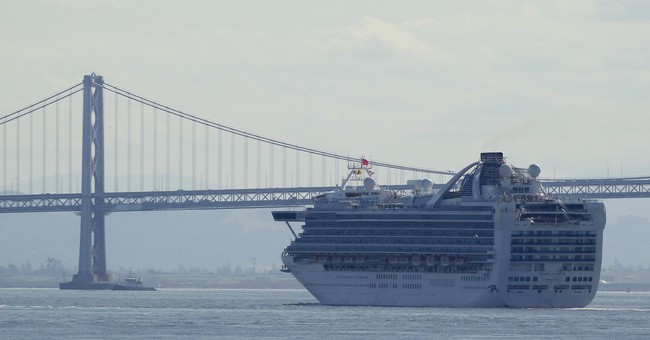 The Grand Princess cruise ship heads for the San Francisco-Oakland Bay Bridge Monday, March 9, 2020, in this view from Sausalito, Calif. The cruise ship carrying at least 21 people infected with the coronavirus has passed under the Golden Gate Bridge as federal and state officials in California prepared to receive thousands of people on the ship that has been idling off the coast of San Francisco. Personnel covered head to toe in protective gear Monday woke up passengers on the Grand Princess to check whether they were sick. (AP Photo/Eric Risberg)

Passengers aboard the Grand Princess are still in the process of disembarking and being sent to quarantine centers in California, Texas, and Georgia, but a couple of them have already filed a lawsuit against Princess Cruises claiming that the company’s negligence exposed them to the Wuhan virus and “exposed [them] to actual risk of immediate physical injury.”

The federal lawsuit was filed on behalf by Debi Chalik, attorney for and daughter of Ronald and Eva Weissberger of Broward County, Florida, and demands $1 million from Princess Cruises.

The lawsuit accuses Princess Cruise Lines of sailing despite “knowing that the ship was infected from two previous passengers who came down with symptoms of COVID-19, and had sixty two passengers on board.”

The couple boarded the ship on February 21 and, along with all other passengers in this sailing, were not examined or screened before they got on the vessel even though the ship had previously had two people on board with the virus, the lawsuit said. They were also not given warning by the cruise line of the potential of exposure before they boarded or while they were already aboard, according to the filing.

The lawsuit says no passengers aboard the Grand Princess were informed when an email went out to previous ship passengers on February 25 notifying them of a possible exposure on the ship.

A man who had been a passenger on the Grand Princess immediately prior to the Weissbergers’ cruise was seen onboard on February 20 after being sick for several days and was subsequently diagnosed with Wuhan virus. He died in late February in Placer County, California. Several passengers who had been on the prior cruise, which toured the Mexican Riviera, stayed aboard for the journey to Hawaii and back.
A representative for Princess Cruises says the company has not yet been served with the lawsuit.

“Princess has been sensitive to the difficulties the COVID-19 outbreak has caused to our guests and crew. Our response throughout this process has focused on well-being our guests and crew within the parameters mandated on us by the government agencies involved and the evolving medical understanding of this new illness. We (sic) not been served with any lawsuit relating to this matter, and we will not comment on any pending litigation.”

If Princess indeed failed to notify passengers of the potential exposure and give them the opportunity to leave the ship or to not board, the Weissbergers’ lawsuit will not be the last.