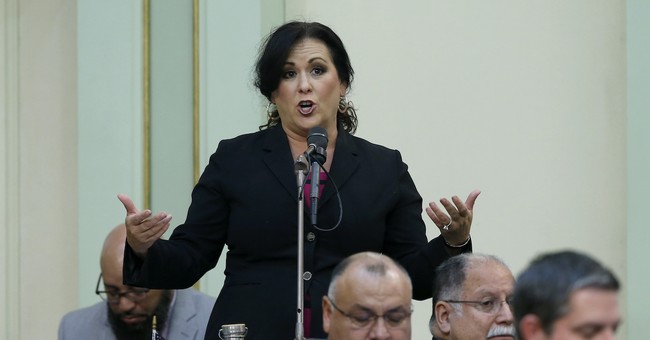 Assemblywoman Lorena Gonzalez, D-San Diego, urges lawmakers to approve her measure to give new wage and benefit protections at the so-called gig economy companies like Uber and Lyft, during the Assembly session in Sacramento, Calif., Wednesday, Sept. 11, 2019. Gonzalez’ bill AB5, was approved and now goes to the governor, who has said he supports it. (AP Photo/Rich Pedroncelli)

Like most musicians, Ari Herstand didn’t plan on being a lobbyist or a political activist. Then AB5, California’s anti-freelancing law, happened. Even before the law went into effect, Herstand was organizing independent musicians, who didn’t have a voice at the negotiating table before the bill passed and who and weren’t exempted “because [bill author Asm. Lorena Gonzalez] got “pissed at the RIAA.”

Herstand got a meeting with Gonzalez in December 2019 after tweeting with her about how AB5 would affect the music industry, particularly musicians who play at private events, bars, restaurants, and nightclubs. Gonzalez has publicly praised musicians for working with her and promised a bill exempting gig musicians, but to date nothing has materialized. Recently Herstand appeared in a YouTube video with libertarian investigative reporter John Stossel titled, “The Bill That Killed Freelance.”

That didn’t sit well with Gonzalez. Herstand posted screenshots of two emails Gonzalez sent to him and numerous others in the Freelancers Against AB5 Facebook group.

Ari – can you stop talking about things you don’t know about? This isn’t helpful.

Then she included a tweet from John Stossel advertising the YouTube video referencing Herstand. In case Herstand didn’t understand what he meant by the first email, Gonzalez followed up.

Going on right wing shows and badmouthing the legislature and saying we are sellouts to unions because they give us campaign contributions is not the way to negotiate your position. It’s not helpful. It doesn’t give us urgency language.

What does that mean? Well, when a bill in California is noted as an “urgency” measure, it takes effect upon receiving the Governor’s signature. So, if an exemption were granted to musicians in an urgency bill, it could take effect as soon as it passes both chambers and is signed by Gavin Newsom instead of having the musicians wait until January 1, 2021.

In other words, she told Herstand to sit back, be quiet, meet any demands she, the public servant, makes, to not exercise his First Amendment rights, and perhaps he will effectively negotiate “his” position that will affect thousands of musicians.

The woman is a tyrant – an unethical, power-hungry tyrant whose actions violate the Code of Ethics that all legislators must abide by and perhaps even violate the law. Maybe a Private Attorney General Action should be initiated against her?

Can You Point To Where the Idiocy Begins with Pete Buttigieg's SCOTUS Tweet?