It used to be the case that Americans found their personal identity in higher, permanent ideals – things like faith and family. Their identity was something outside of themselves, something bigger than themselves. It made for a consistent, if not boring social stability that helped propel this nation to unprecedented prosperity.

These days Americans increasingly find their identity in their politics. Just mentioning a party affiliation comes with a whole host of judgements and notions. We divide ourselves into “good guys” against “bad guys” with no in-between. Our political affiliations have become our gods, and those who espouse the same political religion that we do become our priests. God isn’t dead, but He might want to consider running for office if He’s looking for some new followers.

The general public doesn’t seem to be too surprised nor spare the vitriol when a “right-wing” public figure is accused of sexual misconduct. Of course those guys are perverts. They’re Republicans! They seem to have a harder time believing it when it’s a priest of the left.

Since the Weinstein scandal broke weeks ago (doesn’t it seem like another lifetime by now?) many clergy of the political left have been outed as sexual perverts and even criminal perverts. What’s worse, it seems like everyone around them knew but chose not to inform the public. While Americans were holding up these people as paragons of virtue and social justice their colleagues and employers knew the truth – they were terrible hypocrites guilty of the very crimes of which they consistently accused their political opponents.

When one thinks about the lifestyle of the rich and famous, it isn’t hard to imagine how easy it is to be corrupted by the power and the fame. Surely not many of us would be able to resist the temptations that come when one is surrounded by “yes” people and never has to pay the consequences of a bad decision. You may think you would never stoop to those levels, and indeed your vice might not be sexual misconduct, but it would be something. Booze, gambling, just plain arrogance. The heart of man is wicked and none of us can escape that.

And really that is the entire point of all this. In scripture, Jeremiah 17:9 tells us,

“The heart is more deceitful than all else And is desperately sick; Who can understand it?”

“Just follow your heart”  is the worst advice you can give a person. The heart cannot be trusted. There are numerous references to the wickedness of man’s heart throughout the Bible. The Lord goes to great pains to remind us that our hearts have long been corrupted and innately seek after selfish pursuits.

“For from within, out of the heart of men, proceed the evil thoughts, fornications, thefts, murders, adulteries,” Mark 7:21

“Indeed, there is not a righteous man on earth who continually does good and who never sins.” Ecclesiastes 7:20

“for all have sinned and fall short of the glory of God,” Romans 3:23

This is why we need to look to a higher power, one who is greater than us and never changes. If the condition of our hearts is weak and temporary, we need a stabilizing force.

Sadly, because we have made politics a religion and party a moral identifier we have also made idols of the men (and women) who are the public faces of those things. Conservatives might have told you that Al Franken seemed like a creep, but to many liberals he was a hero – a famous comedian who gave up Hollywood to serve his state.

It might seem obvious to a lot of people that a guy like Donald Trump is a sexual creeper, but Matt Lauer was one of the “good” guys. He showed up in our living rooms every morning and took us to the Olympics and the Macy’s Thanksgiving Day Parade. He was America’s next door neighbor.

It isn’t just the accused who have shocked us. The hypocrisy of their colleagues whom we also looked up to is stinging. While they’ve been accusing conservatives of the most vile behavior, the liberal left have been actively and wantonly covering up the vile actions of left-wing heroes like Louis C.K. and John Conyers.

However, I don’t mean to make this a partisan issue. I only mean to point out the hypocrisy of it all that makes all of this both so entertaining and so disappointing.

The issue here isn’t political leanings. Political ideology is not a marker of virtue. We conservatives are plenty guilty of feeling like we have the moral high ground on everything, but that is in direct contradiction to the Bible as we can see by some of the examples posted earlier. Some ideas might be better than others, but all of our hearts are sick and in need of healing. Our politics do no allow us to escape that reality.

Perhaps the real lesson in all of this is not to make idols of man. It still hurts to discover those we admire are actually depraved individuals but if we can learn to understand that no man is worthy of our idolatry perhaps we won’t be so shocked. Maybe we could be more vigilant about sexual predators in the workplace if we didn’t automatically assume that everyone we agreed with politically was a saint.

We need to let go of the church of politics, because there is no truth in it. Politics is expressly the practice of persuasion. It does not offer salvation or peace. When we choose our alters based on the very human (and flexible) concepts of left and right, we are placing our faith in a god who cannot possibly accommodate our need to be loved unconditionally. We’ll choose our clergy based on ideals that history has shown will most definitely change and  morph over time. Those people will inevitably fail us. They have to…our hearts have no true North outside of the living God.

Let us no gloat (too much) about the shocking and swift disintegration of the liberal left’s religious figures. Instead, let us all take this as a warning not to place man in higher esteem than the one who created us.

Minneapolis City Council President: I Don’t Know Who Will Respond to Crimes After Disbanding the Police The Censoring Left: ‘Net Neutrality’ for Thee – Not for Me

Trump Has No Clear Message Right Now and It's Hurting Him

AOC Accuses Kayleigh McEnany of Racism Towards Her, Then the Receipts Show Up Kira Davis: What the Democrats Did Today Was Political Blackface

Oral Arguments in Gen. Flynn Case on Friday -- An Introduction to What's Ahead The Yield Curve Is Telling Us Something, But Not About The Fed 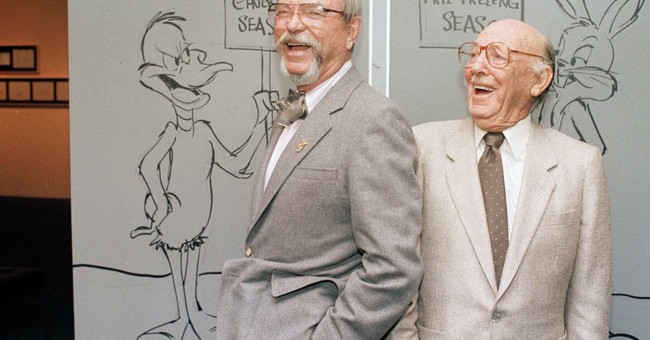