Elizabeth Warren may have been an early favorite to win the Democrat primaries but she’s encountered some serious stumbling blocks as of late. Stumbling blocks like the truth.

Warren has very publicly and very proudly made a major leg of her campaign a promise to end school choice, specifically charter schools. After a middling performance at the Democrat primary debates in Atlanta, Warren headed to few campaign stops. One stop brought her face to face with a passionate grandmother who demanded to know why Warren wanted to limit the education options for her grandchildren while she sent her own to private school. What the presidential candidate did next went viral.

Without hesitation Elizabeth Warren looked at this woman and lied to her face. The five-second clip went out across the internet but the entire conversation lasted nearly twenty minutes, highlighting Warren’s biggest problem when it comes to her opposition to school choice – how does she reconcile the dismal public schools that plague inner cities and minority communities with her insistence that those minority students stay trapped in their failing systems?

So exactly who is the grandmother who confronted boldly Warren and challenged her to tell the truth?

EducationNext writes that she is Sarah Carpenter, a grandmother of 15 (and great-grandmother of one) and school choice activist from Memphis. Had she been confronting Donald Trump or Ted Cruz, Carpenter’s name and story would be in every national headline. Sadly, she’s gone largely ignored. Disappointing, considering her story is made for the “hero” treatment – a black woman and proud grandmother who fought her way out of out of a poverty-stricken childhood. She’s undereducated but driven to secure the American dream for her own grandchildren and other black children around the country who have been abandoned in failing public school systems. It’s a story worthy of a TV movie, but instead Carpenter’s name has been completely erased from what little coverage of the incident has made it to mainstream media.

Her father died when she was 9. Her mother earned money cleaning other people’s houses. Carpenter herself worked as a house-cleaner, did not graduate college, and at one point “couldn’t even afford to buy shoes,” she told Cole. She has 15 grandchildren, five of whom are adopted, and a great-grandson.

Carpenter was brought face-to-face with the inequities in public education while she was babysitting two of her grandchildren one day.

Remarkably, despite her financial status and lack of college education Carpenter went on to become a dedicated school choice activist. She educated herself about the issue, eventually becoming the director for a choice non-profit.

To pay for the six-hour bus-ride to bring 60 parents from Memphis to the Warren campaign event in Atlanta, “I asked everybody that I knew for money, and nobody wanted to fund us for this trip,” Carpenter told Cole. “Somebody put $12,000 on their credit card. Thank God that we got the money to pay them back.” A Gofundme campaign for the Powerful Parent Network has at this writing generated $18,613 from 160 donors toward a $25,000 goal.

“We turned like 40-some-parents away because we couldn’t afford to take them,” Carpenter told Cole.

In 2016, Carpenter briefly spoke at the 25th anniversary main event of Teach for America, decrying the conditions in failing urban schools. “This is America’s modern-day slavery, and we are sick of it and we are going to change it,” she said. “We’re starting a movement to demand better. … We believe that the people from our community should lead this movement. This movement should be for parents, by parents.”

Even though she has already proven herself to be a tour de force, Carpenter doesn’t see herself as the type of person other people want to hear from. In 2018, she was invited to do a Tedx Talk and tells the story of how she wasn’t even sure how to put one together.

In a 2018 Tedx talk, she began by saying that after being invited to give a Ted talk, she immediately went to YouTube and typed in “black people doing Ted talks.”

“I’m not that kind of black person. I’m not as polished, and I’m rough around the edges, and I’m straight out of North Memphis,” she said after viewing a few.

Thankfully, Carpenter doesn’t seem like the quitting type and is in fact someone more Americans should want to hear from. She intends to keep fighting for school choice for her grandchildren and other minority children trapped in failing public schools. Hopefully she’ll be able to make the same admonishments to other elitist politicians that she traveled six hours to make to Warren personally.

We didn’t want to disrupt,” Carpenter tells Warren, almost apologetically, but not quite. “The only way I know is to fight,” she says. “I dream big and I fight hard for kids.”

Holy shit. I have Warren on video lying about where she sent her kids to school.

Sarah Carpenter: "I read that your children went to private schools"

Warren: "No my children went to public schools" pic.twitter.com/PEHr3jNvjx 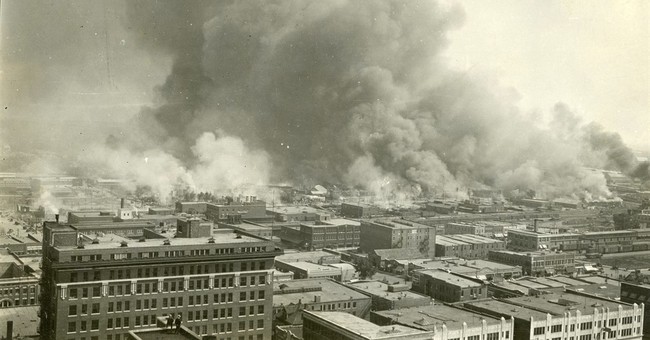 Free Beacon: Media Matters received as much as $2 million in coronavirus relief