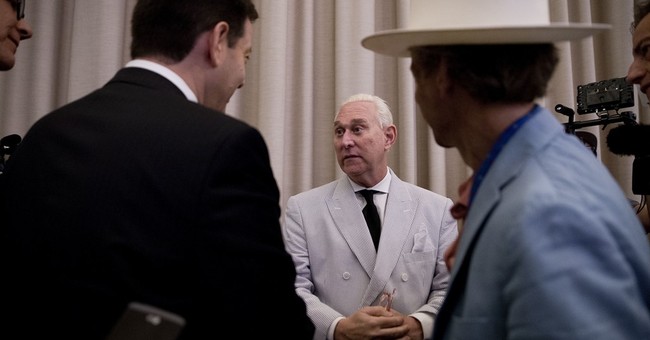 President Trump’s former campaign adviser, Roger Stone, decided to take to Twitter to lash out at Sen. John McCain declaring he will burn in hell after he criticized the president for pardoning Joe Arpaio.

Karma about to get you, @SenJohnMcCain and you will burn in hell for all eternity https://t.co/C2LcqEFbz9

What did McCain say that Stone felt comfortable saying such a thing to a terminally ill veteran, POW, and U.S. senator? A human being with any decency and decorum wouldn’t say such a thing without something truly horrific being done, right? Well, Stone proved he’s a person without either, because Sen. McCain simply put out a statement and a tweet that reads as follows:

“No one is above the law and the individuals entrusted with the privilege of being sworn law officers should always seek to be beyond reproach in their commitment to fairly enforcing the laws they swore to uphold. Mr. Arpaio was found guilty of criminal contempt for continuing to illegally profile Latinos living in Arizona based on their perceived immigration status in violation of a judge’s orders. The President has the authority to make this pardon, but doing so at this time undermines his claim for the respect of rule of law as Mr. Arpaio has shown no remorse for his actions.”

.@POTUS's pardon of Joe Arpaio, who illegally profiled Latinos, undermines his claim for the respect of rule of law https://t.co/2FckGtwQ2m

Only a truly despicable person would respond with “you’re goin’ to Hell!” because a U.S. senator from the state where Arpaio was sheriff respectfully disagrees with an action of the sitting president. An action that is highly controversial to Americans on both sides of the aisle.

Stone is no longer an official adviser to the president, but the fact that he was serves as another indicator that Trump’s first inclination, contrary to what he says, isn’t always to have “the best” or “the smartest” people around him.

It Is Almost October First; It Is Time To Stop Using National Polls