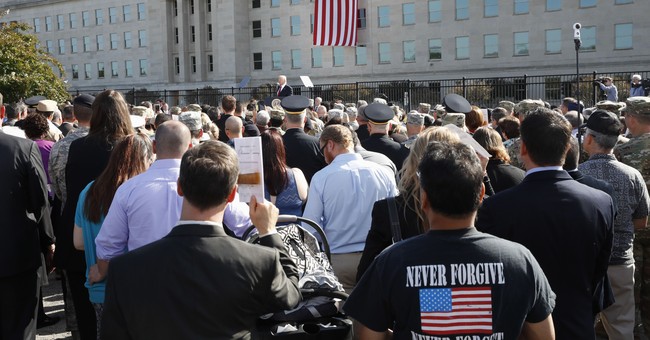 Donald Trump presided over his first 9/11 remembrance day as president on Monday.

Speaking outside the Pentagon, which was partially destroyed by a third hijacked plane 16 years ago, the President took the time to honor Officer Isaac Ho’opi’i, who was on duty at the event, as he was on this day in 2001. Officer Ho’opi’i would carry eight people out of the Pentagon that day. Ultimately, 184 were killed at the Pentagon on 9/11.

The President said of Ho’opi’i,

On the morning of 9/11, Pentagon Police Officer Isaac Ho’opi’i and — a special person — was one of many heroes whose love for his fellow Americans knew no bounds. He was a mile away when he got the call over his radio that a plane had crashed into the Pentagon. He sped to the scene and raced into smoke and fire. Few people would have done it. He ducked under live electrical wires and trudged through puddles of jet fuel only steps away from sparks and from vicious flame.

In the pitch black, he began calling out people in need of help. Isaac heard faint voices and he wanted to answer those faint voices. One by one, he carried people out of the burning rubble. He kept going back into the smoldering darkness, calling out to anyone who could hear, anyone who was alive. He saved as many as 20 people who had followed his voice; he carried eight himself.

For nearly 36 hours, Isaac kept on saving lives, serving our nation, and protecting our safety in our hour of need. And today, Isaac continues to do exactly that. Isaac still works at the Pentagon, now as a sergeant. He’s on duty right now, and he’s joined us here today for the ceremony. And this morning, all of us — and all of America — thank Isaac for his service. Where is Isaac? Thank you. Thank you, Isaac. Thank you.

To Isaac and to every first responder and survivor of the attack, you carry on the legacy of the friends you lost. You keep alive the memory of those who perished. And you make America proud — very, very proud.

When Trump is Tweeting Joe Rogan’s Comment About Biden, You Know Biden’s In Trouble Atlantic Story: We've Seen this Movie Before - It was called 'Rathergate' NYC ‘Tribute in Light,’ Live Name-Reading to Honor 9/11 Victims Back ON After Public Outcry

Strib: 2020 election about to break records — for firearm and ammunition sales