John McCain Accused of Living It Up at Hanoi Hilton; Twitter Does Not Disappoint 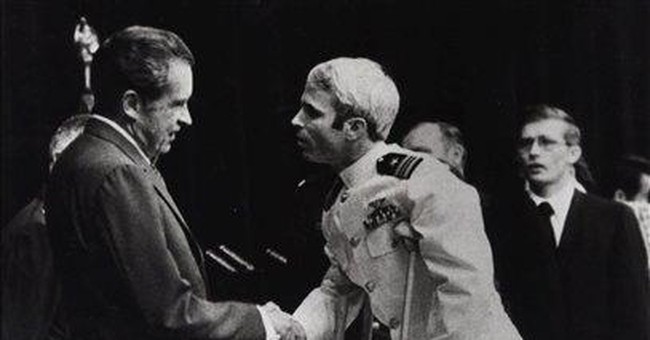 The “tough resister” of the Hanoi Hilton became an American hero, soon on the fast track to a seat in the Senate. (AP Photo/File)

Sen. John McCain (R – Ariz.) regardless of his perceived political faults, is an American hero. From 1967 until 1973, he was held and repeatedly tortured as a prisoner of war in the North Vietnamese prison dubbed, The Hanoi Hilton.

This fact has been unbelievably twisted in the minds of some idiots as proof that McCain wasn’t, in fact, a POW, but was living it up at the city’s Hilton hotel.

The reply tweet came in response to this short exchange between AlwaysTrumper Bill Mitchell and Sarah Quinlan.

Twitter is a place where dumb, uninformed thoughts are published as a matter of course, but this reply immediately got the setdown it deserved from anyone with two brain cells.

"Hanoi Hilton" was an ironic nickname for a North Vietnamese POW camp. https://t.co/DH46auYa7P

Mockery is the only way to combat this kind of thing, clearly.

the Hanoi Hilton was nice and all but it didn't have as good an omelet chef as the Hai Phong Hyatt pic.twitter.com/E5m28dBvTI

This shows just how aggressively stupid some can be.

Stop your searching twitter. We found the dumbest thing of the day, maybe the month. https://t.co/jfn3nhYHSg

And there’s only one thing to do with stuff like this:

Print it and frame it. Twitter illuminates public discourse, if only by showcasing what knowledge is not actually generally known. https://t.co/DcMVUfhTsI

And while the tweet alone is ridiculously stupid, it’s the likes and retweets that show just how many out there think the same:

Saddest thing is the number of ignorant people who favorited this without a clue what the Hanoi Hilton entailed. pic.twitter.com/I2N0bIpTUe

In the words of President Trump, “Sad!”