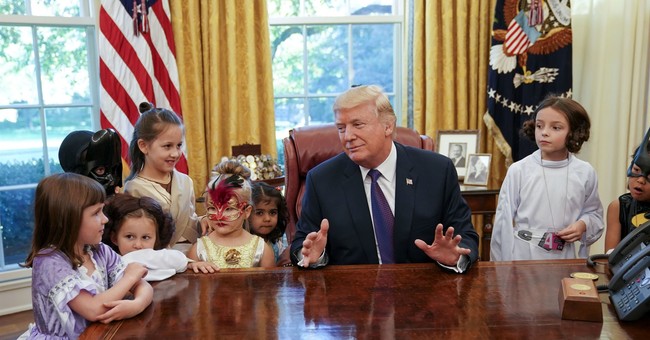 President Trump took time out of his day on Friday for a photo op with a dozen or so of the media’s children dressed up for Halloween at the White House. What ensued is truly cringeworthy.

Why the President thought it was a good idea to insinuate the children of those who work in media shouldn’t be cute in incomprehensible.

Trump goes on to ask the little kids if they want to grow up to be like their parents and immediately answers his own question with a middling hand gesture and says, “not so much.”

The moment was truly awkward, and as a parent, I can imagine purely infuriating.

As the mother of a nine-year-old, I would be angry and upset if anyone, let alone the President of the United States, backhanded me in front of my child in such a way.

Maybe it’s just me, but I find using children to get in subtle digs at their parents is reprehensible. The unemployment numbers are terrifying. But we ain’t seen nothing yet. – HotAir