The Clinton vs. Sanders Fight Rages On (and the NYT Just Made It Worse)

There are a lot of Democrats who have said that they want to defeat Donald Trump in 2020, but they’ll need to pry their knives out of the backs of their fellow liberals first before they can take him on. One challenge is an old feud from the 2016 primary that is simmering once again, aided by some meddling by the New York Times in a story published overnight.

So far, the Democratic presidential primary has been a clown car of obscurities, as candidates most normal Americans would have to Google cannibalize each other’s potential bases of support. The latest amusing turn saw Austin Mayor Steve Adler flying to Indiana to endorse South Bend Mayor Pete Buttigieg rather than support either of his fellow Texas Democrats, former Congressman Beto O’Rourke or former San Antonio Mayor Julian Castro.

A major contributing factor to the Democrats’ primary circus is how their top two 2016 contenders still cast long shadows across the field.

Former Secretary of State Hillary Clinton has publicly sworn she won’t run again, but an endorsement from her and her husband, former President Bill Clinton, will be highly coveted by most, if not all, of the Democratic primary candidates. More influential this time around is the vast web of financial and organizational support developed by various players in the broader Clinton network.

And that brings us to this current feud.

Meet Neera Tanden. She was an aide to Clinton’s 2008 presidential campaign, was an unpaid adviser for the 2016 race, and currently leads the liberal think tank Center for American Progress (CAP), which, as the New York Times noted, has “donor rolls [that] overlap substantially with those of the Clintons’ campaigns and foundation.”

A blowup between the leader of an influential think tank and Bernie Sanders’s presidential campaign reflects ideological divisions among Democrats as a legacy Clinton organization vies with a liberal wing to harness millennial energy https://t.co/MZ5b77Yaht

Tanden does not get along well with Faiz Shakir, who formerly was the chief editor of ThinkProgress, a liberal media website operated by CAP. The Times‘ article describes Shakir asking Clinton a tough question during an interview that Tanden apparently expected to be a cakewalk.

Accounts vary as to what happened next — one anonymous eyewitness said Tanden popped back into the room after Clinton left and “punched” Shakir in the chest, Tanden said she just “pushed” him — but the article’s description of their relationship as “bad blood” seems beyond question.

Add in the never fully silenced chorus of grumbles from Sanders supporters that the Clinton machine unfairly deprived him of a fair chance to win the 2016 nomination, plus the ThinkProgress video that dropped this week taking a harsh swipe at Sanders for preaching socialism but living a life of capitalistic luxury, and that is some Taylor Swift-level bad blood indeed.

Still, not all that bizarre for what is developing into a long and vicious slog of a primary. It’s a uniquely high level of tension between the two camps but, hey, politics ain’t beanbag.

But then the New York Times had to drag someone’s mother into it.

They called Tanden’s mother, Maya Tanden, and got several juicy quotes for the article, including this section calling her daughter “very aggressive” (screencapped in case they edit the story later):

And another section where Maya Tanden says her daughter is “sick of” her work and plans to quit soon:

According to several tweets posted this morning by Tanden, Maya Tanden is 78 years old and not involved in politics in any way. According to a statement Tanden posted from her mother, she was contacted by one of the reporters “out of nowhere” and claims she did not initially understand her words would be published. Maya Tanden says she called the reporter back and was then told her comments would be treated as “on the record,” a term she says she had not heard before.

“I feel very misled,” said Maya Tanden, “and it is shameful that the New York Times would use my words to hurt my daughter.”

I love my mom. She's not involved in politics. And this is all very upsetting to her. https://t.co/KQE8Q8OSxy

That was almost two hours ago, and the Times does not appear to have edited the article or reacted to the objections from Tanden and her mother.

Yes, yes, you have to assume you are always “on the record” when you speak to a reporter, and anything Tanden herself said was fair game — but is that really a fair standard to apply to someone who is not politically involved or a public figure in any way? Or were the reporters hoping to trick a 78-year-old woman into serving up some dishy gossip about her child?

Tanden knew she was going to be a subject in a Times article, and she’s a high-level political operative who knows how to be savvy around the media. She was not warned they were going to call her mother out of the blue. The comments obviously are not catastrophic, but they certainly aren’t helpful for Tanden either. At minimum, it can’t be good for her professionally to have people wonder if she really is planning to cut bait and run away in two years.

Tanden had several allies come to her defense, tweeting comments critical of the Times‘ approach to the story and noting the fact that they had not called Shakir’s parents, just Tanden’s.

WTF, @nytimes – Would you run an article about a *male* political leader’s relationship with a rival political campaign that relied mainly on quotes from… his mom?

And would it be newsworthy for a male leader to be viewed as “aggressive”? @neeratandenhttps://t.co/2ea4hevcdP

Really ⁦@nytimes⁩ you dig up some BS on ⁦@neeratanden⁩ via her mother?!? Because she is assertive & a leader? I just spent 3 hours talking about gender media bias on ⁦@MakeItPlain⁩ & you proved my point for me. ⁦@SXMProgress⁩ SMH. https://t.co/wMN39x4uhU

And the Democrats’ civil war continues.

The Real Reason Why They Hate Him: Donald Trump is a Heretic from the Left’s Secular Religion 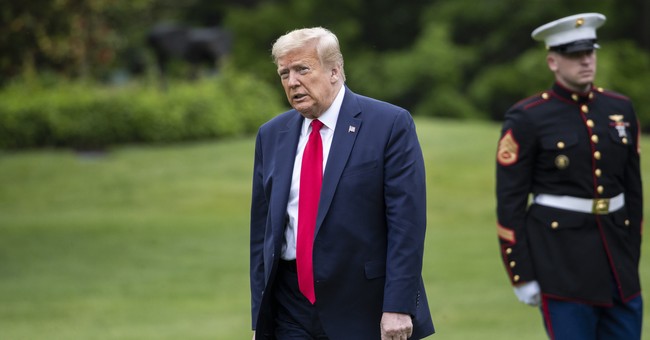 In Light of Recent Cyber Attacks Against President Trump, Should the GOP Fear an 'October Surprise?'