Video: Never Trumper Jennifer Rubin Says the Republican Party Must Be “Burned Down” in Order to Save It

There are unhinged Never Trumpers. And then there is Jennifer Rubin, who never passes up an opportunity to show off what she firmly believes are her “woke” creds when in the presence of like-minded commentators.

The faux “conservative” Washington Post columnist appeared on MSNBC’s AM Joy show on Sunday to discuss with a panel of fellow Trump-hating Democrats the absolute horror (sarcasm) of Sean Spicer getting a dancing gig on ABC’s Dancing with the Stars.

The entire segment, in fact, was devoted to discussing just how wrong it was for any former Trump administration official to be able to enjoy life in any capacity after working for the “racist” in the White House who, in the minds of the panelists, has done horrible things to the Latino community.

Host Joy Reid teed up Rubin’s unhinged rant by asserting that “this was an extreme administration that is dangerous.” Reid also stated that if you are Latino, you should always carry your birth certificate because you might be “scooped up and stolen” by ICE. “But yet it’s fine. Go and dance on TV. It’s just incredible,” concluded an outraged Reid.

Rubin then weighed in. Here’s what she said (as transcribed by The Blaze):

“It’s not only that Trump has to lose, but that all his enablers have to lose,” the columnist continued, as other panelists nodded in agreement. “We have to collectively, in essence, burn down the Republican Party. We have to level them, because if there are survivors, if there are people who weather this storm, they will do it again. They will take this as confirmation that, ‘hey, it just pays to ride the waves look at me I made it through.'”

“And so up and down the ticket, federal state and local offices, the country has to repudiate this,” Rubin added. “It is not a normal administration.”

Watch video of Rubin’s remarks below, courtesy of Newsbusters:

Rubin’s comments were an echo of statements she made in July 2018 on how all Trump administration officials should be shunned and harassed publicly as a “life sentence” of sorts for their role in the administration:

'On Saturday's edition of 'AM Joy' on MSNBC, Washington Post columnist Jennifer Rubin said WH press secretary Sarah Huckabee Sanders should be harassed publicly as a "life sentence" for her role in promoting the Trump administration.' #ViolentRhetoric https://t.co/NLJGWT9qtW

Ironically, it is fake Republicans like Rubin who are destroying the fabric of our society as we know it by siding with extremist Democrats like Reps. Maxine Waters and AOC in calling for shunning, ostracizing, harassment, and confrontation of Republicans they don’t like.

Rubin likes to talk about how this administration is supposedly not a “normal administration.” In actuality, what is not normal is that she sees fit to call for the current and former Trump administration officials to be trailed by protesters wherever they go.

Imagine how she’d react if her logic was applied to her? She’d go on Reid’s show to complain about how hateful and deranged Republicans have become.

Rubin has become a one-trick pony. It’s tiresome and sad, really. Maybe by 2020 she’ll finally do what she should have done a long time ago: Switch her party registration to Democrat. 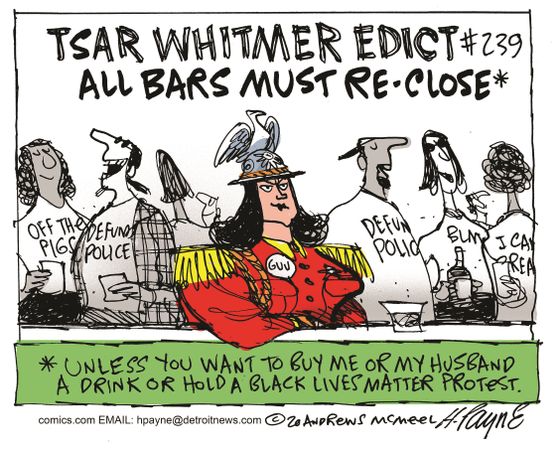