Jim Acosta Tries to Spin a Trump-Birx Interaction Into a Controversy, but the Transcript Tells the Real Story

Because Jim Acosta is Jim Acosta, never a day goes by when there is a White House press briefing where he doesn’t try to make himself the center of attention.

Thursday was no exception to the rule. During the White House Coronavirus Task Force daily press briefing yesterday, Department of Homeland Security undersecretary for science and technology William Bryan spoke about a study that indicates sunlight, higher temperatures and humidity help accelerate the deterioration of the Wuhan coronavirus on surfaces, as The Hill reports:

Bryan presented data that found how long the virus can live on solid surfaces or in the air was cut significantly under high temperatures, higher humidity and when exposed to sunlight. He said his office was also studying how certain disinfectants might kill the virus more effectively than others, referencing isopropyl alcohol and bleach.

President Trump appeared to find Bryan’s presentation fascinating, and wondered if light could somehow be used as a treatment for the virus itself in people:

“So, supposing we hit the body with a tremendous — whether it’s ultraviolet or just very powerful light — and I think you said that hasn’t been checked but you’re going to test it,” Trump said. “And then I said, supposing you brought the light inside of the body, which you can do either through the skin or in some other way. And I think you said you’re going to test that too. Sounds interesting.”

Trump went on about it, asking questions of Bryan and Dr. Deborah Birx. Here’s how the exchange went down:

Trump: But now we get it from one of the great laboratories of the world. I have to say, it covers a lot more territory than just this. This is — this is probably an easy thing, relatively speaking, for you.

I would like you to speak to the medical doctors to see if there’s any way that you can apply light and heat to cure. You know — but if you could. And maybe you can, maybe you can’t. Again, I say, maybe you can, maybe you can’t. I’m not a doctor. But I’m like a person that has a good you know what.
Reporter: But, sir, you’re the President.
Trump: Deborah, have you ever heard of that? The heat and the light, relative to certain viruses, yes, but relative to this virus?
Birx: Not as a treatment. I mean, certainly fever —
Trump: Yeah.
Birx: — is a good thing. When you have a fever, it helps your body respond. But not as — I’ve not seen heat or (inaudible).
Trump: I think it’s a great thing to look at. I mean, you know. Okay?

But here’s how Acosta framed it:

Except … it wasn’t a “disagreement.” Trump asked a question, Dr. Birx said she’d not heard of it, and that was about it. Yet Acosta presented it as though it was a significant moment, a controversy.

It’s almost like Acosta watched a different press briefing than the rest of us.

This Twitter user watched the same press briefing we all did, and blasted his hot take (language warning):

She said she hadn't heard of it used as a treatment. Trump asked if it could be… it was a fucking question, not a disagreement. Sheesh, can you listen instead of trying to dunk?

Unfortunately, this interaction wasn’t the only thing the mainstream media misreported from the briefing. My RedState colleague Brandon Morse has a piece coming up on the whole “Trump tells people to ingest disinfectant” story nonsense in just a few minutes. Stay tuned. 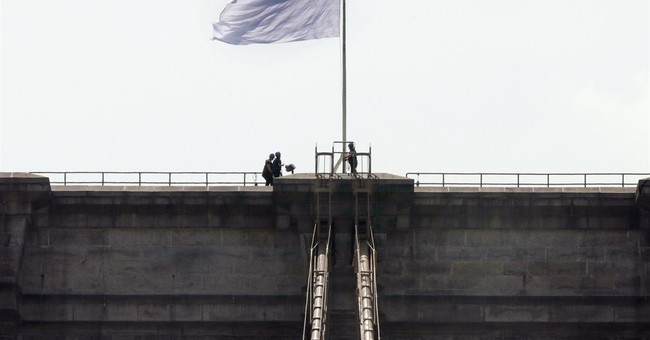