SOMETHING IS WORKING. Illegal Immigration Plunges to 1971 Levels as Deportations Skyrocket

In this Aug. 11, 2017, photo, immigrants suspected of crossing into the United States illegally along the Rio Grande near Granjeno, Texas, are held by U.S. Customs and Border Patrol agents. After hitting a 17-year low shortly after President Donald Trump took office, the numbers of people coming over the border have risen four months in a row. (AP Photo/Eric Gay)

Today the Department of Homeland Security released end-of-year data for Fiscal Year 2017 (October 1, 2016, through September 30, 2017). The results were dramatic.

The number people caught trying to sneak over the border from Mexico has fallen to the lowest level in 46 years, according to Homeland Security statistics released Tuesday that offer the first comprehensive look at how immigration enforcement is changing under the Trump administration.

The figures show a sharp drop in arrests immediately following President Trump’s election win, possibly reflecting the deterrent effect of his rhetoric on would-be border crossers, though starting in May the number of people taken into custody began increasing again.

Arrests of foreigners living illegally in the United States surged under Trump. U.S. Immigration and Customs Enforcement (ICE) officers made 110,568 arrests between Trump’s inauguration and the end of September, according to the figures published Tuesday, a 42 percent increase over the same period during the previous year.

This from the DHS press release:

In FY17, U.S. Customs and Border Protection (CBP) recorded the lowest level of illegal cross-border migration on record, as measured by apprehensions along the border and inadmissible encounters at the U.S. ports of entry. However, in May CBP began to see a month-over-month increase in apprehensions and inadmissible cases along the Southwest border, most notably from children, either as part of a family unit or unaccompanied by their parent or legal guardian.

In addition to the 310,531 apprehensions by U.S. Border Patrol agents there were 216,370 inadmissible cases by CBP officers in FY17, representing a 23.7 percent decline over the previous year. Illegal migration along the Southwest border declined sharply from January 21 to April, which was the lowest month of border enforcement activity on record.

By the end of the year, family-unit apprehensions and inadmissible cases reached 104,997 along the Southwest border. Another 48,681 unaccompanied children were apprehended or determined to be inadmissible.

CBP continues to be concerned about steady increase in the flow of unaccompanied children and family units from Central America, as transnational criminal organizations continue to exploit legal and policy loopholes to help illegal aliens gain entry and facilitate their release into the interior of the country.

This is the family unit data they are talking about

While the family numbers are about a quarter of what they were at the beginning of the fiscal year, the increase since May is something to watch. If a DACA law passes Congress that makes it an ongoing program, you will see this number skyrocket.

Going hand-in-hand with this is the huge increase of deportations carried out from the interior of the United States.

Immigration and Customs Enforcement, whose officers pick up people for deportation away from the border, made 143,470 arrests, an increase of 25 percent from 114,434 a year earlier. After Trump took office, ICE arrests surged 40 percent from the same period a year earlier.

The numbers released by the government Tuesday show that deportation officers are taking Trump’s call for an immigration crackdown to heart, even without the funding increase that the president has sought from Congress for more hiring. In February, then-Homeland Security Secretary John Kelly scrapped the previous administration’s instructions to limit deportations to public safety threats, convicted criminals and recent border crossers, effectively making anyone in the country illegally vulnerable.

“We have clearly seen the successful results of the president’s commitment to supporting the frontline officers and agents of (the Department of Homeland Security) as they enforce the law and secure our borders,” said Elaine Duke, acting secretary.

ICE said that deportations totaled 226,119, a decline of 6 percent from the previous year, but that number masks a seismic shift away from the border. ICE often takes custody of people at the border before deporting them; the sharp drop in Border Patrol arrests means fewer people to remove.

ICE said “interior removals” — people deported after being arrested away from the border — jumped 25 percent to 81,603 from 65,332 the previous year. They rose 37 percent since Trump’s inauguration compared to the same period a year earlier.

Some critics have said that the increase in interior deportations is the result of rounding up harmless and long-settled illegals, but, according to DHS, more criminal illegals were deported last year than in the past:

ICE said the number of “criminal aliens” it deported increased to 67,859 during the 2017 fiscal year, a 12.5 percent increase over the previous year.

The takeaways from this, in my view, are:
1. We may have reached equilibrium on the border keeping illegal immigration to where it was around the time Obama entered office.
2. US policies in regards to illegal children continue to entice family units to make the dangerous trip.
3. More persons who present themselves at the border claiming some sort of asylum status are being turned away than in past years.
4. More aggressive internal ICE actions will reduce the attractiveness of illegal immigration as an option as, unlike the Obama years, once a person clears the zone around the border they are no longer safe.

By any standard, though, the border security situation is in much better hands under Trump than under Obama. 'It is through Susan Rice that Obama gets his third term': 'Chatter' about Joe Biden's VP pick getting louder 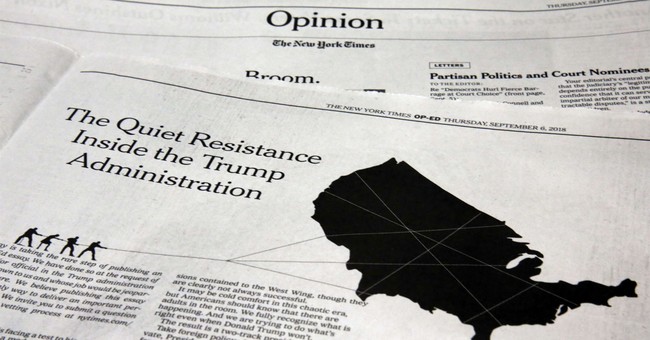 With That NYT Writer's Admission About 1619 Project, A Liberal Reporter Wrecks It With One Tweet